“The usability sucks, and the user interface is pretty basic,” TrustRadius CEO Vinay Bhagat told me yesterday. “They haven’t had the same innovation that other products in the market have seen … but removing those incumbents is not a trivial thing.”

Solutions from vendors such as IBM, Silverpop (which IBM just acquired), and Teradata are still not at the level of younger, fresher competitors such as Marketo, Hubspot, and Act-On, in spite all the “consumerization of the enterprise” we’ve been hearing about.

In fact, several well-known solutions ranked below average in usability, according to TrustRadius survey respondents. Only Oracle’s Eloqua ranked very high both in usability and in being strongly focused on the enterprise market. 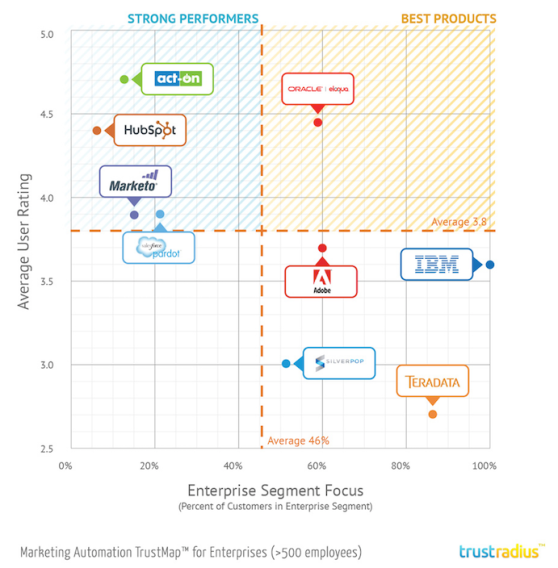 Part of that, however, might not be the enterprise vendors’ fault. For some reason, enterprise users just seem to be more harsh on their software than employees at smaller companies.

“SMB users are less critical of their products, and the products they use tend to be higher rated, as they’re inexpensive and meet needs neatly,” Bhagat said. “Enterprise products, on the other hand, require configuration and setup.”

Bhagat added that not all the vendors are “super-happy” about where they ended up, but he said “the data doesn’t lie.” 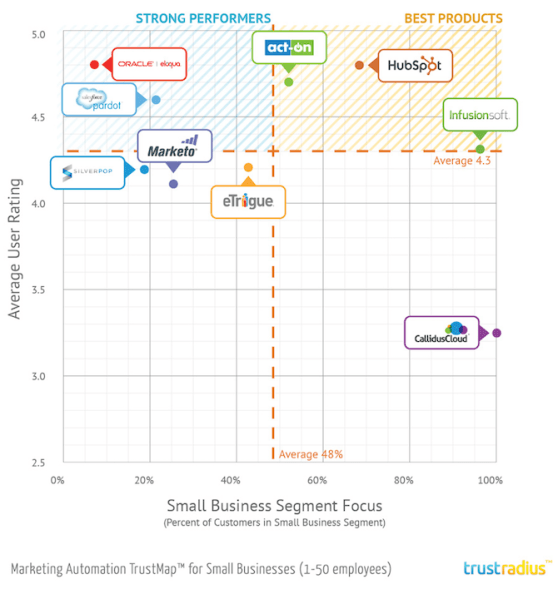 Two interesting aspects of the report highlight emerging trends: an increased segment focus, and a widening division in the market between point solutions and suites, or “marketing clouds.”

“We had a thesis that it was important to look at the market by segment –small, midsize, and enterprise — and when we ran the data, it really rang true,” Bhagat says. “We saw some really stark differences.”

Hubspot, for instance, started out as a small business solution and now has definite aspirations for the enterprise. Similarly, Act-On — which just announced a $42 million funding round —  is specifically aimed at mid-market companies but has been adopted in the enterprise as well. The data shows, Bhagat says, that while both companies have appreciable share in enterprise, usage tends to be more departmental and often in conjunction with other solutions.

For instance, the same company will often use both Hubspot and Marketo at the same time. That’s something we saw in our VB Marketing Automation Index report as well, with a full 58 percent of companies using more than one marketing automation system, and a full 30 percent using three or more. 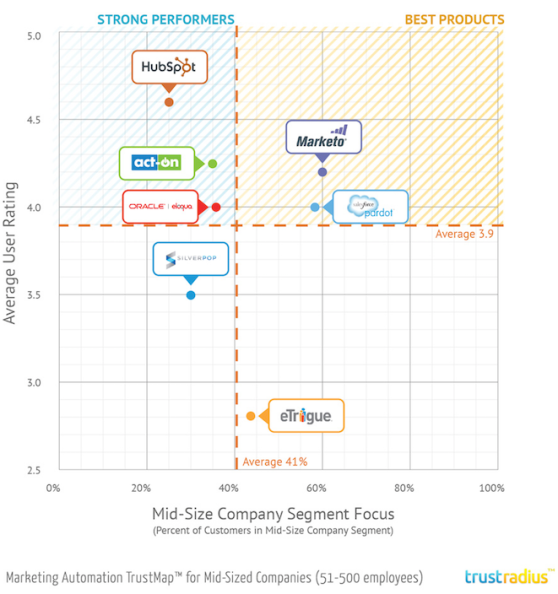 The other trend is the distinction between single solutions, like a Marketo, and integrated marketing clouds like those offered by Adobe, Salesforce, Oracle, and perhaps IBM, which pull together a number of components such as social, marketing campaigns, and analytics into one suite.

“I think it’s a classic debate between best-of-breed and enterprise suite,” Bhagat said, echoing what Act-On CEO Raghu Raghavan told me two days ago. “It’s very difficult to be world-class in every facet … you’ve got competition in every module.”

The market will likely divide between those who insist on best-of-breed for every component of their marketing stack, Bhagat said — and are willing to put up with some integration blood, sweat, and tears — and those who demand everything from one vendor, with one customer relationship, and a single point of interface.

It’s a difficult decision for enterprises, and there’s no one right answer for everyone.

“Oracle, for instance, makes an argument that they are more integrated that Salesforce,” Bhagat said. “But they don’t own a world-class social tool. And Omniture was best-in-breed when Adobe bought it but now faces very stiff competition from Google Analytics Premium.”

Marketo is pretty much the only fully enterprise-focused independent marketing automation platform remaining, with the possible exception of Hubspot. Hubspot, of course, is independent, but more mid-market-focused at the moment than locked in on the enterprise.

That would tend to make both companies appealing acquisition targets, I would assume.