A dog can’t explain gravity or learn Isaac Newton’s laws of motion, but that doesn’t stop it from knowing how to catch a Frisbee out of midair on the beach. When playing Trials, I am just like that dog.

I know what everyone is thinking: Trials Evolution didn’t debut all that long ago, and it seemed like it had more than enough to satisfy its fans. We don’t need more difficult, two-dimensional motorcycle platforming.

We do need more, and publisher Ubisoft and developer RedLynx delivered with Trials Fusion.

I love Trials Evolution, which debuted on Xbox 360 in April 2012. It took the wonderful gameplay and physics that RedLynx established in its earlier Trials games and expanded on it with better leaderboard chasing, improved user-creation tools, and challenging achievements. Exactly two years later, Fusion builds on top of that framework. Once again, RedLynx has taken its beloved, familiar franchise and turned up the quality.

And like the aforementioned Frisbee-chasing pooch, I don’t know if I’ll ever get tired of fighting off forces that I barely comprehend in my efforts to get my bike to the goal line.

The same physics and pixel-perfect controls as other Trials games

The reason that RedLynx can continue to build on top of its Trials formula is because the core gameplay is so strong. That continues in Fusion.

As before, you’ll only have control over your virtual motorcycles throttle and brakes as well as the lean of the rider. With this limited palette, you must conquer numerous obstacles in a simulation of physics and gravity that just feels right. This is something that the developer nailed in the original Trials, and it wisely left the controls mostly unchanged.

That’s a good thing. Trials Fusion is one of the best-controlling games of all time. Period.

It is the poetry of motion. It is about giving us frail, easily injured humans a safe way to interact with the fringe outskirts of nature’s laws without exaggerating those laws like Tony Hawk’s Pro Skater or some of the Trials clones you can find on mobile.

This means that Fusion is mostly about RedLynx inventing new and interesting levels that require players to move, contort, and power their bikes in insane ways. It succeeds at that on multiple fronts, but it actually didn’t leave the controls completely unaltered.

This Trials has tricks. For the first time, you can not only take your bike off of sweet ramps, but they can also fling their body off of it to score points on certain levels called FMX. Like the rest of Fusion, you can’t perform “Supermans” or “Going to Hells” by jamming on the face buttons. Instead, you must use the right stick to push the player character off the bike. The onscreen character will perform different moves depending on the direction of the stick and the orientation of the bike.

Like the rest of the controls, this scheme makes a lot of sense even if is a bit difficult. I found the levels that require me to get a high score entertaining and a nice change of pace even if I still prefer the traditional levels that have me trying to beat my friends’ times on an obstacle course.

A variety of challenges on every stage

One of the ways Fusion pushes you to the limit is with challenges. One of Trials Evolution’s coolest features is its achievements system that forced gamers to do things like go through a whole stage without leaning or letting off the throttle. While Evolution had a handful of these, each of Fusion’s stages has three challenges.

This addition gives you plenty of opportunities to distract yourselves from the core experience with skill challenges like performing 10 flips without crashing. It also has more ridiculous situations like a tennis match against a penguin. This adds hours worth of content on top of an experience that can already get pretty lengthy if you spend any time trying to perfect a level.

I’m 15 hours in, and I’ve only completed a fraction of these quests. I can’t wait to go back and do the rest.

Separate leaderboards for each version

This isn’t fair. I’ll admit that right now. I shouldn’t hold it against Trials Fusion that it has a separate leaderboard for its Xbox 360, Xbox One, PlayStation 4, and PC versions, but I do.

Trials HD and Trials Evolution were massive hits on Xbox 360. For weeks after Evo hit Microsoft’s last-gen system, I would go back and forth with about a half-dozen friends who were all competing for the fastest times on various stages.

It actually wrenches my guts to think that, now, some of my favorite rivals will end up playing on different platforms and that this will put an end to our competition before it even starts.

Now, almost no other games feature cross-platform leaderboards or connectivity. I’ve only seen it in the Need for Speed games from publisher Electronic Arts through its Autolog system.

No online multiplayer at launch

RedLynx found that Trials fans didn’t really play the online multiplayer that it introduced in Trials Evolution. That doesn’t include me. I played the crap out of that. One of my favorite ways to spend a Sunday is throwing on some music or podcast and letting Trials Evo throw me into match after match with three other players.

That’s not an option this time. Local multiplayer is available for those of you who can get two to four players in the same room. Otherwise, you’ll have to wait for something called “tournaments,” which is an upcoming mode that Ubisoft will release for Fusion at some point in the next few months.

For me, Trials Fusion plays like a nearly perfect game.

The physics-based action combined with the wealth of leaderboard chasing and difficult challenges has already kept me engaged for hours. It’s something that I can easily sink a whole day into, and it’s also something that I can pick up on a whim for 15 minutes at a time. While I’m bummed about the fragmented leaderboards and online-multiplayer situation, those are only problems that really bother me when I’m not actually playing Fusion. When I am playing, nothing really bothers me.

If you’re unsure if you’re ready for more Trials — but you loved the previous games — you’ll find plenty to love here. Just make sure to hold a conclave with your friends to agree on a platform.

Once you do, you’ll easily squeeze the maximum amount of joy out of Fusion.

We reviewed the Xbox One version of Trials Fusion. Ubisoft provided GamesBeat with a digital-download code of the game for the purposes of this review. 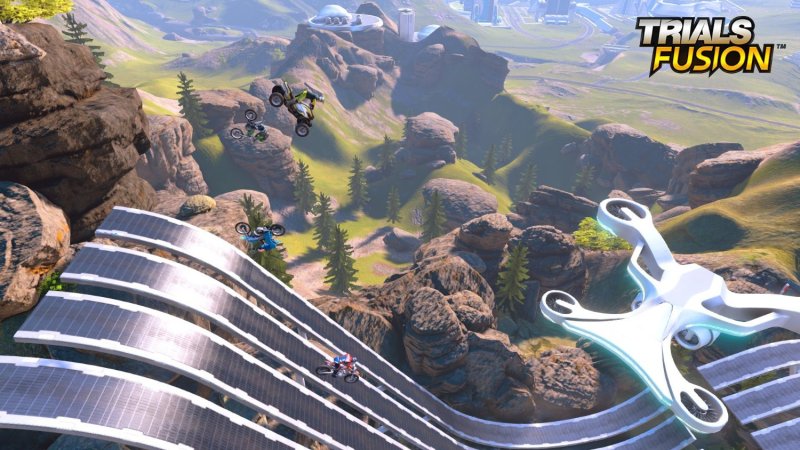 Above: Huge jumps will force you to maintain control in the air and give you time for tricks.