Blizzard has a created a lot of memorable characters over the years, which actually makes it surprising that it’s taken the developer this long to create a crossover.

But Heroes of the Storm, a multiplayer online battle arena game (MOBA) in the same vein as heavyweights such as League of Legends of Dota 2, finally pits Blizzard’s famous heroes and villains from the Warcraft, Diablo, and StarCraft franchises against each other.

And while only in technical alpha (a step away from beta, meaning it’s far away from an actual release), it still offers 24 characters to choose from. However, that list is missing a few notable names.

Below are five characters that we feel Blizzard needs to add at some point to the roster. Whether it’s for their importance to their game’s story, their interesting combat skills, or just because they make us laugh, we think that these combatants would make great additions to Blizzard’s blossoming online battle arena. 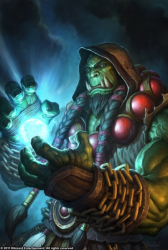 Above: The Warchief, Thrall, was at one point in charge of the collection of races known as the Horde.

Thrall is probably the most notable absence from the Warcraft universe. In fact, he’s played such a large part in the stories of Warcraft III and World of Warcraft (and all of its expansions) that some could argue he’s the main protagonist of the series at this point.

Part of Thrall’s popularity comes from his interesting backstory. Humans raised him as a gladiator after they murdered his parents and clan while he was still a baby. Eventually, Thrall would escape, reunite the Orcs, and become their new chieftain.

Thrall’s a Shaman, a class that switches between spellcasting and melee combat. These skills would easily translate to the world of Heroes of the Storm. In fact, it’s likely that Thrall was intentionally excluded from the opening roster so that Blizzard would have an A-list character to add further down the road. 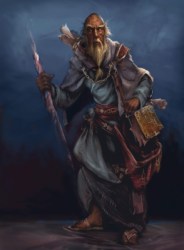 Above: Deckard Cain wants you to stay awhile and listen.

If I asked you to name two characters from the Diablo series, I’m sure you’d mention Deckard Cain right after the franchise’s namesake. Cain is one of the few characters to appear in all three installments of Diablo, and his distinctive voice and catchphrases (“stay awhile and listen”) have left a permanent mark on gaming culture.

Of course, Deckard Cain is an old man who probably wouldn’t last long in a real fight, but Heroes of the Storm already pushes logic aside in the name of fun. Let’s not forget that one of the current heroes is a Tauren metal star who wields a guitar-ax.

Besides, Cain is a member of the Horadrim, a group of mages tasked with stopping Diablo and his brothers. I’m sure he knows a spell or two besides identifying unknown items. 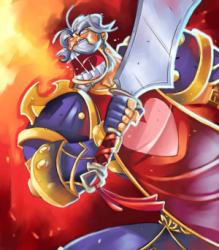 Above: Leeroy Jenkins rushes into battle.

Let’s do this. Leeroy Jenkins was a player’s World of Warcraft character who found mainstream fame thanks to a video that showed him carelessly and humorously causing his entire party to die. In fact, Jenkins is so famous that Blizzard has actually made him an official part of Warcraft lore. He’s even a Legendary card in the free-to-play Hearthstone: Heroes of Warcraft.

So why not put him in Heroes of the Storm? I’m sure I’m not the only one who’d smile every time he’d hear Leeroy’s battle cries from across the map. Besides, just like current Heroes of the Storm champion Uther, he’s a paladin. He has plenty of skills to help him in a fight.

But if they don’t add him, well, at least he has chicken. 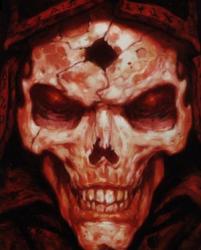 Above: The Dark Wanderer during his slow transformation to Diablo.

Aidan was the Warrior who slew Diablo in the original’s canonical ending. However, Aidan decided to imprison the monster’s essence within himself, which was as terrible an idea as it sounds. In Diablo II, Aidan is a corrupted man known as the Dark Wander who constantly marches to the east. Eventually, he completely transforms into Diablo.

Aidan could use a lot his Warrior skills as a playable character in Heroes of the Storm, but we could also see some his demonic powers used for his most powerful attacks.

Character trivia: The Warrior eventually named Aidan’s original backstory was that of a wandering hero foreign to Tristram, the setting of the first Diablo. Blizzard changed this in Diablo III, retroactively making Aidan the son of Tristram’s King, Leoric. 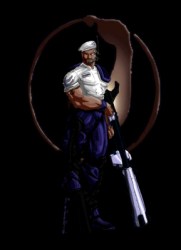 Above: Despite his normal appearance, Samir Duran is a mysterious character.

Currently, all of Heroes of the Storm’s StarCraft characters come from the newer Wings of Liberty and Heart of the Swarm. But what about all of those great characters from the original StarCraft and its Brood War expansion? Notably, Samir Duran.

Samir was a mysterious character who, despite appearing human, claimed to serve a higher power. During the Brood War, he would fight for both the Terran and Zerg factions.

In combat, Samir uses a powerful cannon rifle, similar to Ghosts like Nova, who’s already a character in Heroes of the Storm. Since Samir hasn’t shown up in StarCraft II yet, it’s possible that Blizzard is holding off on introducing him to their all-star brawl. Still, it’d be fun to see this enigma added to the roster.