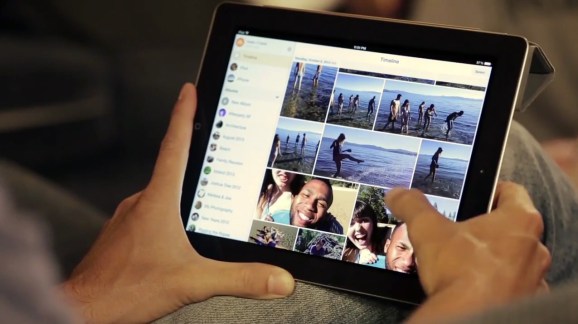 The Loom app for iPad.

Today photo-sharing app Loom announced that Dropbox had acquired it.

This news follows Dropbox’s long-term efforts to enter the photo storing and sharing game. Most recently, Dropbox launched Carousel, a galley for photos and videos. When it launched, Dropbox called Carousel a “place for all your memories.”

Loom, a Y Combinator grad, raised $1.4 million from Google Ventures and other investors in early October 2013. Last time we checked (in December 2013), it had eight full-time employees.

With this deal, Loom will shut down on May 16. The company shares that paid Loom users “will receive the same quota on Carousel/Dropbox for free, for an entire year.”

Loom writes that its vision “aligns perfectly with Dropbox’s vision for Carousel.”

“We know this is a big deal. This decision was made with great care. We have worked hard on our product and feel that our vision aligns perfectly with Dropbox’s vision for Carousel. Dropbox has invested the past seven years focusing on building a secure home for your files. And now with Carousel comes a home for your photos and videos as well. We share the common goal of crafting a high quality product, always putting users’ needs first. After spending some serious time investigating if this was the right move for us, we realized that Dropbox has solved many problems around scaling infrastructure and at Dropbox the Loom team will be able to focus entirely on building great features with a fantastic user experience. We are enthusiastic about being able to contribute our ground level perspective to help craft a beautiful experience for our users. And at the end of the day, that’s what matters most to us.”