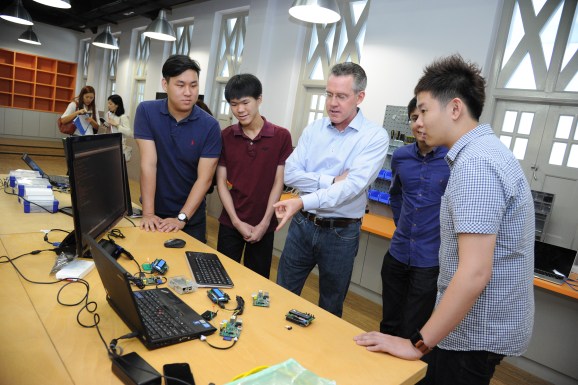 This sponsored post is produced in association with IDA Singapore.

Steve Leonard is the deputy executive chairman of the Infocomm Development Authority of Singapore (IDA Singapore), a government agency tasked with “developing the infocomm cluster as a major engine of growth and leveraging infocomm for economic and social development.”

The U.S.-born Leonard has a unique perspective on Singapore’s burgeoning tech startup sector — and how Singapore can play a role in the global economy.

Rather than try to turn the city-state into a “Silicon Peninsula” or some other clone of tech centers elsewhere in the world, IDA Singapore focuses on enhancing Singapore’s existing virtues: It’s a hub for companies that want to expand into Asian markets, and it’s got a remarkably well-developed tech infrastructure of its own. Plus, Singapore is one of the friendliest countries in the world for starting a new business.

We caught up with Leonard on one of his many trips to San Francisco to find out more about Singapore’s plans, its startup scene, and its coffee.

VentureBeat: How is Singapore positioning itself in the global tech economy?

Steve Leonard:  We want to think about how Singapore can play a role in encouraging companies to explore ideas that they might have for Southeast Asia, because Singapore is an obvious choice for that whole market.

There are 400 to 500 million people within a couple of hours flight radius of Singapore. If you stretch it further to a six-hour flight radius, then you have roughly three billion people. Nearly half of the world’s population is within a fairly easy flight from Singapore.

We would encourage people to say, “I’d like to work on that demographic — rising wealth, young population, early 20s ‑‑ in a lot of these countries.” There’s a whole demographic ‑‑ smartphone penetration increasing, and so on.

We’re not trying to beat or mimic Silicon Valley, as much as we’d like to try to be a partner, or a teammate, with other markets. Part of our capabilities, really, are working with and adapting to a lot of different environments.

VentureBeat:  What are you specifically doing to encourage innovation within your organization?

Leonard: We’ve got a lot of ideas and creative people. What we’re trying to do is think, as any government organization would, what would be some of the areas that we can do away with? Where would there be regulation or environmental constraints? Trying to think about how we look at talent, as in encouraging positive flow of talent.

We have all of those in Singapore, but we haven’t necessarily brought them together as powerfully as we might.

We have billions of dollars a year, literally, going into various types of basic research. What we’re trying to do is think again about this idea of what’s translational technology. How do we go from basic to applied to commercialized? There have been a lot of people spending a lot of time trying to confront this issue. We’re really trying to do a better job at unlocking some of that ‑‑ mixing some of that.

VentureBeat: Tell me about IDA Labs.

Leonard: We have two labs. We have one that is co-located in the National Design Center, which is a designated heritage building.

The Center is a showcase with several floors of different design, including industrial design. We’re trying bring the design community, graphic artists, and other designers together with what we’re doing with the technology portion of our lab, which is where we have lots of tinkering, makers space, tech‑shop type of equipment.

We have people who we’re encouraging to come in and think about this intersection of technology and design, in one co-located space. We have that open to the public, so that people from all walks of life can come in and experiment and experience. We don’t know how it’s going to go yet, frankly, because it’s new, but we’re making it available.

The second one is in our offices, in which we’re making technology available for our own employees. We’re encouraging our own staff to experiment and explore. We have a guy who’s built flight cockpit, on his own.

What we’re trying to do is also provide a space where people who would like to experiment or explore have a place in which they can use our resources effectively ‑‑ our company resources ‑‑ to pursue personal ideas, curiosities, and passions.

The idea is that the smarter we are about technology, the better partner we can be to government.

Leonard:  Right. The lab is also a place in which Singapore‑based tech‑product startups can come in and work with us to do tests, stress‑test their technology, as part of us accrediting them as being ready to work with government.

There’ll be a sandbox environment, in which we can replicate a customer’s environment, so that we can test out interoperability, test out loads, and be confident with that technology.

Also, it’ll be a place where guys with an idea and an opportunity to pursue something might come together and say, “Here’s what I’m doing and here’s what he’s doing, and we’ll see if our technology is complimentary or works together.”

For small companies, the traditional view is it’s too risky [for government] to work with them because they don’t have the use of technology and so on.

What we’re trying to do is find a way to get over that hurdle, and therefore adopt innovative technology as government. One way to do that is to make sure that we’ve been able to accredit these small companies.

VentureBeat: What about the Singapore startup community? Does it lie mostly in a district or a complex or a building? What would I find if I went there and wanted to hang out?

Leonard: There are a couple of places. The one that most people think of is called LaunchPad at One North. Its colloquial name is Block 71. It’s basically a six‑storey building that was a disused former factory type environment that was scheduled to be demolished or refurbished. It ended up being reallocated instead as a sort of startup spot.

It’s full, with 250 companies in it. There are already plans for two additional buildings.

They’re going to build a new modular unit building that can be easily reconfigured, between the two. Then, a big covered room for storage and places for people to get together and have food.

We’re trying to create a whole community, where there’ll be an opportunity just to have lots of get‑togethers to meet over food.

VentureBeat: How about coffee? Do they have good coffee in Singapore? Because startups and coffee go together very well.

Leonard: As a committed espresso nut, I can tell you that Singapore has surpassed most cities in the world in making great espresso.

There’s a simple reason. No. 1, there’s a big community that likes great espresso. There’s been a big support base for all this, in fact. Also, we’re close to another great espresso country. For those that know, Melbourne and Sydney have some really great espresso places.

A lot of Melbournites have moved up to Singapore and established little outposts. From when I was first there, at the end of ’97 until now, there has been an explosion of great coffee shops.

I hold most of my meetings in one or more of the coffee bars. I go to the coffee shops, because I think it’s a good way to get to know people.

VentureBeat: Is there anything else you want to add about what’s going on?

Leonard: Here’s what I’d like people to think about. Again, I want to re-stress, we have all the raw ingredients, but we see the next stage of our own evolution as working with — and being a teammate to — a bigger community.

Our goal is not to try to take notes and say, “If only we did x and y.” What we’d like to do is to say, “To the extent you want to be a part of what’s happening in Asia — and it’s tough to be a global company and not think about Asia — and as we think about cool ideas, we’d love to hang out with you.”

So we’d like to be a teammate and a part of the bigger community, as opposed to trying to out-maneuver or outwit anybody else.