I hate giant turtles. I want to turn them into turtle soup. These enormous, powerful walking tanks regularly trounce my troops, turning my Planestriders into stains on the Death Shard’s landscape.

Warlock 2: The Exiled, a PC game from developer Ino-Co Plus and publisher Paradox, is the successor to the out-of-nowhere original, a genuine surprise from 2012 that turned out to be one of the best fantasy-themed 4X strategy games (explore, expand, exploit, exterminate) since the classic Master of Magic. The sequel adds a significant mode that improves its strategic gameplay, though it could use an overall injection of character.

The first Warlock was like a giant sandbox — you ran in and played. No campaign. No structure. While that freeform gaming is a lot of fun, sometimes it’s nice to play a strategy game with a goal that’s more concrete than “destroy everything in sight.” The Exiled mode gives you such a goal. Banished by the United One, your Great Mage — the leader of the faction you lead — is searching for his home of Ardania (which also serves as the setting for the Majesty series of strategy games). But your wizard isn’t traveling just mere miles — dimensions known as shards separate you from your homeland. 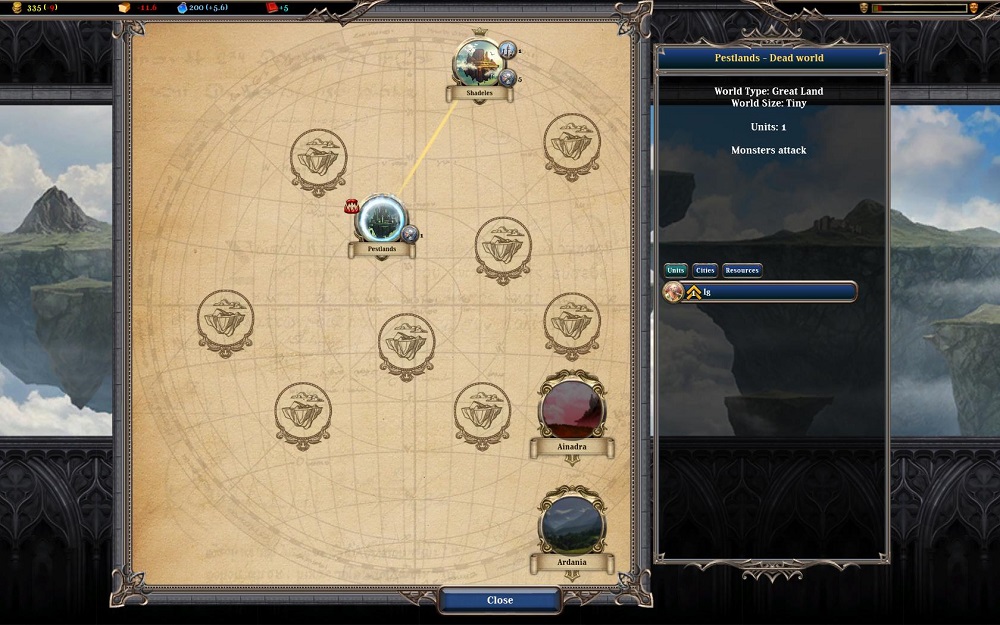 These shards are like islands in the great dimensional sea. Each has a terrain theme — a tropical paradise, a land of the dead, and so on. Portals connect the shards, and as you expand from your starting city, you must explore these lands to find the final gate home. Think of it as Quantum Leap but with portals instead of time hops. Actually, The Exiled is more like America’s island-hopping strategy of World War II. You land on a new shard, take out the foes stopping you — either enemy forces or roving monsters — consolidate, find the gate, and then land a beachhead on the next shard. This may sound repetitive, but as you trek across shards, the United One sends his minions to stop you — giant dragons, a mage who can change the very landscape upon which you trek and build (a farm becomes useless when the land it sits upon turns into a lake), even the dead rising up. 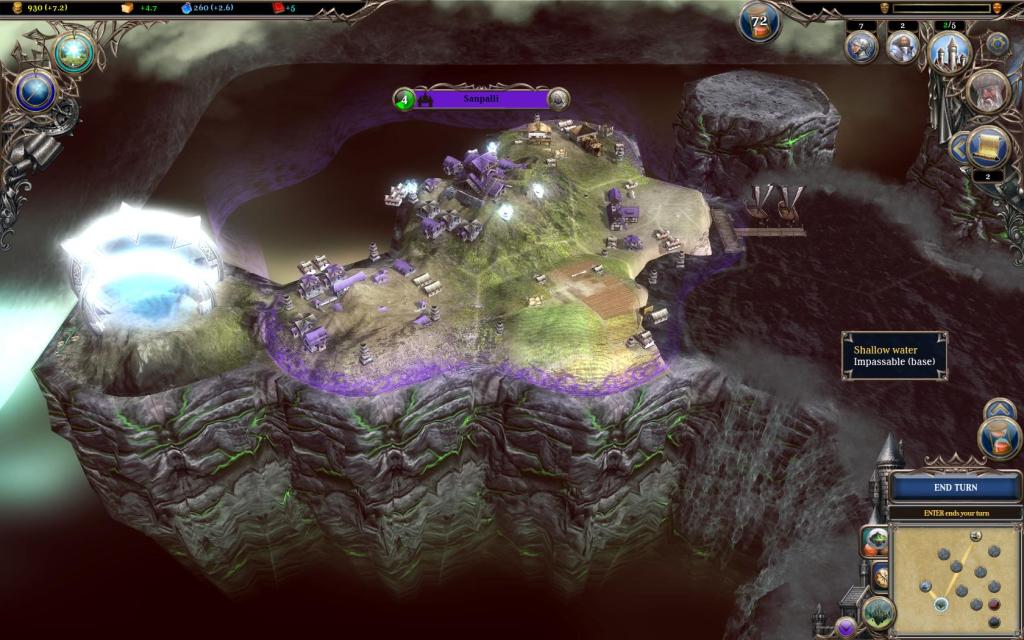 Above: A portal dumped me right next to water. I had to build a harbor in order to cross it.

All of this leads to some interesting strategic choices. Do you make your first city the main source of production? Do you build up all of your cities — and give your enemy time to throw more forces at you? When you go through a gate and find unfriendly terrain, do you cast spells that changes the land or found a town and build a harbor to get across the water? The sandbox is still punishing fun You can still play a standard map from Warlock, selecting its size, the number of opposing Great Mages, and the difficulty. The portals still take you to lands full of tantalizing resources and powerful monsters, and the new factions add strategy to this old mode. And even if I hate the giant turtles, I respect that Warlock 2 still embraces the ridiculously powerful wandering monsters from the first game. It still feels like an achievement when I defeated these beasts, an action worthy of ale and song. I didn’t even mind when one of these critters camped a portal (which happens every now and then). This just adds to the strategy. 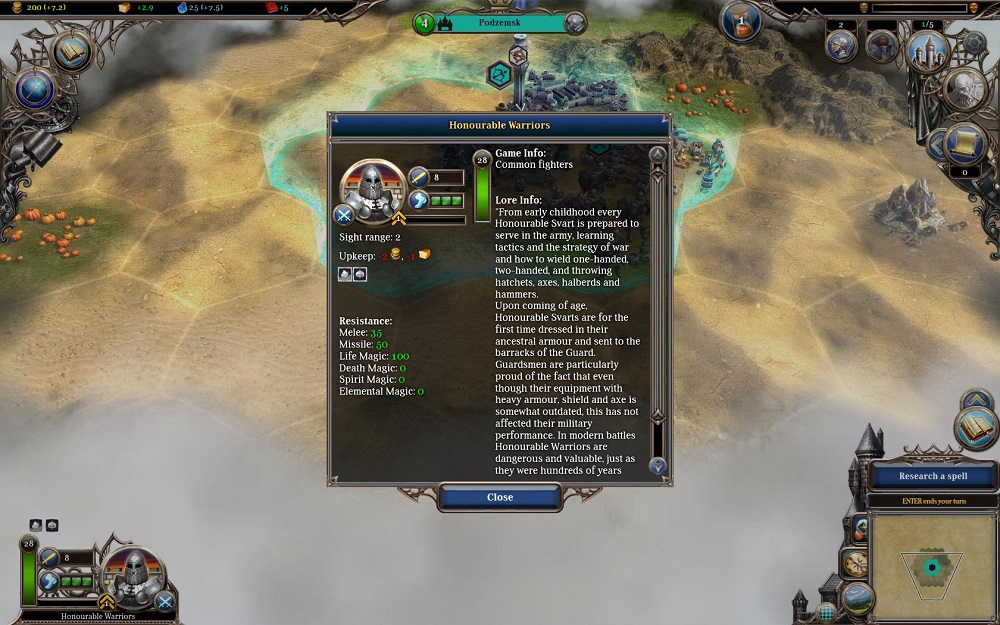 Above: Yeah, looks like a typical fantasy warrior wearing armor to me.

The two new factions — the Planestriders and Svarts — aren’t exciting. The Planestriders are cobbled together from humans and monsters, a group of refugees of the planes. But I found little that’s interesting about this ragtag band, and if I wanted monsters, I could’ve played the Monster faction. The Svarts have a little character to them: They’re highly armored, and they’re kinda like steampunkish dwarven Vikings. They sound interesting, but in practice, the faction felt like just another group of slow, tough units. The buildings and soldiers didn’t really show the aesthetic at work. The only units that felt in-line with the theme are its city-founding settlers, which walk on mechanical legs. Great Mage allies turn into foes for no good strategic reason In two different games I had going, I had fostered alliances with other Great Mages. Everything was going well — and in one game, I had delivered my ally from doom when I sent my a portion of my units to blockade the shard to his world and keep out a horde of undead. But a few turns later, he turned on me, declaring war. I’m not sure if the A.I. read my blockade as an aggressive action when it was really a maneuver designed to assist. It just felt odd that my ally would turn on me under such circumstances. In another game, my ally turned even though I had traded gold with him, was two shards away from him, and had left him alone.

Island-hopping in a fantasy world felt new to me, and this builds upon the already engaging strategy that exits in Warlock. The Exiled gives the series something akin to a true campaign mode, and I’m eager to give it a try with different Great Mages, different leader perks, and different factions. I do hope that in further updates — the original Warlock received a number of expansions — Ino-Co crafts some truly interesting factions. But even if the developer doesn’t, I trust the mod community to come up with some spectacular homebrewed content. Even giant turtle killers.

Warlock 2: The Exiled is out now for PC. The publisher provided GamesBeat with a Steam Early Access code for the purposes of this review.