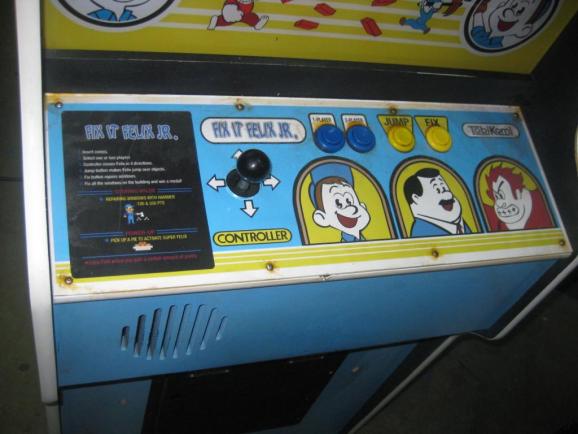 The Fix-It Felix, Jr. cabinet has 1980s-looking wear and tear even though it was produced in 2012 by Disney.

I’ve tried wishing upon a star, but I don’t think that’s going to help me come up with the money I need to make my hearts desire come true.

One of the few Fix-It Felix, Jr. arcade machines that Disney made to promote its 2012 animated film Wreck-It Ralph is up for sale on eBay. Its owner has the rare cabinet listed at $20,000 or best offer. That might sound excessive, but eBay seller Happysleeper thinks that the film studio only made about a dozen or so of these cabinets. The last time one of these hit eBay, it sold for $20,000 after 69 bids.

Wreck-It Ralph is a film about a villain from an early 1980s arcade game called Fix-It Felix, Jr. The story follows the Ralph as he rebels against his role before learning that he must accept himself for who he is. In the film, Fix-It Felix, Jr., is an arcade machine that debuted in 1982 from publisher TobiKomi. In reality, however, that game never actually existed. It is instead an homage to Nintendo’s Donkey Kong. The shape of the machine itself is even based on the Donkey Kong and Mario Bros. cabinets.

The unit on sale now is in perfect working order, although Disney purposefully scuffed it up to give the machine an authentic look.

Disney didn’t just make the cabinets — it also released Fix-It Felix, Jr., as a web game. It looks and plays just like an arcade release, and you can check it out on its website. The arcade-cabinet version is nearly identical to the Fix-It Felix, Jr., you find on the Web, but it has more animation and better-looking characters.

Now, if you’ll excuse me, I’m gonna go sell both of my cars to see if I can afford this.