Democracy is a 3,000 year-old experiment in whether the wisdom of the crowds can govern an entire civilization without eventually voting itself into oblivion.

A new public opinion poll [PDF] may cause us to seriously question this system of governance by revealing that a sizable chunk of Americans disagree with scientists and what is — and is not — scientific fact.

More than 30 percent of Americans (enough to stall major legislation) disagree with scientists on a few key items:

“Science ignorance is pervasive in our society, and these attitudes are reinforced when some of our leaders are openly antagonistic to established facts,” said 2013 Nobel Prize winner Randy Schekman.

A new AP-GfK public opinion poll surveyed about their political values and a range of issues widely believed in the scientific community. Around 37 percent of the American public disagrees about global warming, and 42 percent have no confidence in human evolution. The full table is below: 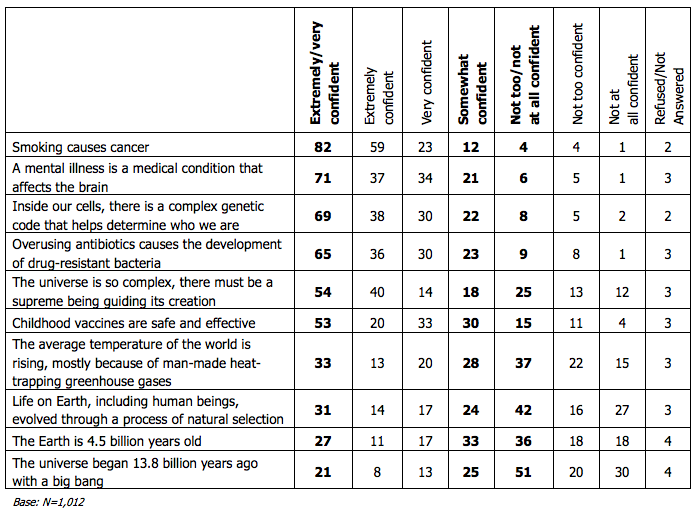 If citizens who disagreed with the scientific community were uniformly distributed throughout the country, this kind of poll wouldn’t much matter. But people tend to cluster in cities, and our democracy elects federal representatives based on geography. Sometimes, they vote in people like Congressman Dr. Paul Broun, who says that evolution and the Big Bang are “lies straight from the pit of Hell.”

Even more troubling, a common clustering point for scientific doubters, Texas, has a disproportionate influence on the content high school textbooks throughout the entire country, since Texas schools constitute one of the biggest blocs of textbook buyers.

It’s not all bad: Nearly everyone knows that smoking causes cancer and there is a thing called DNA. But since the fate of an informed society and, potentially, the survival of the human race depends on a broad consensus on certain scientific facts, this might be poll to cause some worry. And, by “some worry,” I mean lots and lots of worry.