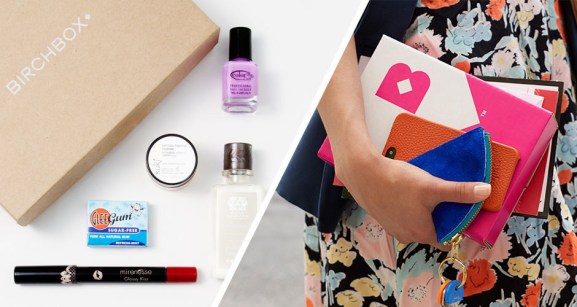 As other “stuff in a box” startups have folded, Birchbox has thrived.

The New York City startup, which sells $10 curated boxes of beauty samples to around 800,000 subscribers, has raised $60 million in new funding, reports Fortune. The new funding reportedly brings Birchbox’s valuation to around $485 million.

Founded in 2010, Birchbox had previously raised just $12 million in venture capital. With this new cash injection, the subscription startup will begin to resemble a more traditional beauty company: It will use a big chunk of the cash to open its first brick-and-mortar store in Lower Manhattan’s SoHo neighborhood, a sort of fashion shopping Mecca. It’s also considering developing its own products as well as expanding further internationally.

But the primary use of the funds will be a major marketing push. Expect to hear about Birchbox’s beauty boxes in glossy magazine ads and in-between TV shows.

Birchbox founders Katia Beauchamp and Hayley Barna aim to increase people’s annual fashion spending. If subscribers of the boxes like the samples inside, they can buy the full products on Birchbox’s website. Because Birchbox has $96 million in annual subscription revenue, and the company says it earns roughly 30 percent of its revenue from product sales, it’s probably bringing in around $125 million a year.

The company also sells men’s boxes — they’re green rather than hot pink — but it hasn’t released subscriber numbers for that segment.

Birchbox operates in the U.S. and Europe (it acquired Paris-based JolieBox in late 2012). In Europe, it competes with Glossybox.