On Chillingo’s web site, you can easily find a link for submitting a game to the publisher of third-party mobile games. Chillingo, a division of gaming giant Electronic Arts, exists to publish mobile games from indie developers and, hopefully, turn them into big hits. 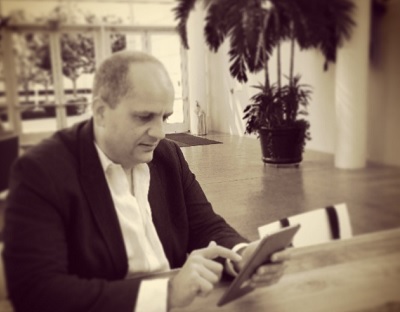 Above: Ed Rumley of Chillingo

Chillingo wants to make it easy for any indie game maker to submit games that it could publish. That’s because, with a million-plus active games on the Apple iTunes App Store, there’s no telling where the next big mobile gaming hit will come from. And publishers like Chillingo are always one hit game away from greatness and big piles of revenue.

Ed Rumley, general manager at Chillingo, is one of the executives in charge of finding those hits. He argues that his company can offload tasks like marketing and distribution so that developers can concentrate on making their games. That’s what Chillingo did for a little game called Angry Birds, back in 2009. And that led Electronic Arts to buy Chillingo for $20 million in 2010.

Do developers still need publishers on mobile? Listen to Rumley’s argument below.

GamesBeat: What was your impression of some of the important stuff at the Game Developers Conference (the big game trade show in March)?

We met some great guys. We’re always looking for that next hit. That’s what our business is about. I’m sure you experienced it yourself, but it felt very full. Somewhere that hit’s waiting to happen.

GamesBeat: Are there a lot more publishers competing for these indie developers? The number of publishers trying to reach out toward indies seems to be growing.

Rumley: We’re certainly aware of it. At Chillingo we’re in a very fortunate position, in that we have so much heritage. Our business is more than 10 years old. We’ve been in the mobile space all that time. We’ve been there since day one in the App Store. Our reputation with the indies is solid. We’ve had a lot of editor’s choices from Apple over the last 12 months because we’re delivering quality games. I believe that’s respected by the indie community.

I’m certainly aware that there are other companies out there, but hopefully our experience and reputation will take us to the top of that list.

GamesBeat: What qualities should a developer look for in a publisher, beyond the people who are just writing big checks now?

Rumley: Obviously a track record is important. If I look at things from Chillingo’s side, we always look for a partner that mirrors the same aspirations — somebody that wants to make a good, fun, quality game. Fun’s important to us. Without that, we don’t have user engagement. Then we look for games we feel can monetize. Getting the two together — a game that can monetize and a game that can engage in the free-to-play space — is a difficult thing. We see developers who have that ability and are doing a great job.

Another thing a developer needs to look for is user acquisition. It doesn’t matter how good your product is. You need a go-to-market strategy. We have a very strong partnership with our colleagues in EA Mobile, and we have our own cross-promotion. We call it Pop the Offer. It went live last year and generates significant impressions for us. It’s a cross-promotion mechanic, creating these interactive bubbles that float around within our games. It’s a significant user acquisition tool for us.

Above: Tiny City, published by Chillingo

GamesBeat: How many games do you guys have out now?

Rumley: I guess there’s multiple ways to answer that. We have a very extensive back catalog because of our history. The number of games we’re publishing at any one time has gone down considerably. We were publishing a lot of games around two years ago, or even 18 months ago. Now our business has migrated from a pay-per-download business to a free-to-play business. With that, we’ve had to change not just our organization and the way we work, but the volume of games we publish. We had to shift toward a live services organization. We probably publish in the region of 40 or so games a year now.

GamesBeat: Your back library, going back to day one of the App Store — there’s a percentage of these titles that are still active, versus the total universe of titles that you’ve published, right?

Rumley: Yeah, we have certain titles, pay-per-download titles, where developers are continuing those projects. They’re some early successes on the App Store. But over time contracts expire of course.

GamesBeat: Developers now, do they often want investment or some sort of funding to help them out with publishing their titles now?

Rumley: Developers want different things. Lots of developers want experience. As I said, someone like Chillingo, our experience is very deep — not just on how to make great games, but we have experience based on the volume of games we’ve worked on. It shows in the metrics. Our average score in the U.S. App Store is currently around 4.2, 4.25 for the last 12 months.

Some developers want monetization experience, because it’s something that they find difficult to understand. We have to learn about it ourselves. We learned a lot from the teams that worked on The Simpsons, for example. And some developers do want money. There are a lot of developers out there, and their needs are very different.

GamesBeat: How can smaller titles compete in the App Store now, given the dominance of the three games that are up there now, from Gung Ho, Supercell, and King? They seem to be capable of buying just about all of the ad inventory themselves.

Rumley: What I can say is there’s certainly room in the market. On a weekly basis, you see games that do very well. We see a number of successes relative to everyone. It could be an individual in Vietnam, as an example, through to a more manufactured indie developer. But ultimately, that scale of success varies. Can people have success? Yes.

You mentioned a few games. Games at that level are very unique, when you consider that there are 7,000 games a month launching on the App Store. So there is room, but there are certain patterns in games that come out. Those are relative across all sorts of different factors — game design, monetization, and so on. There’s room in the market, but it’s tough.

GamesBeat: Flappy Bird showed that it is possible to have a viral hit, still. Do you have your own interpretation of what that game means?

Rumley: I downloaded Flappy Bird along with the rest of the world. I scored 119 on it, so I was a bit into it. We all play games for a living, and we’re very fortunate that we get to play games constantly. But when a game consumes your time like Flappy Bird, it means it’s done something right. That’s fun. I applaud that kind of breakthrough success. It was a fun game. Or I should say it is a fun game, depending on how you look at it.

GamesBeat: I know localization is one of the things you do. Some games, like Clash of Clans, they don’t really do much localization. Can you talk about that contrast?