NES Remix 2 is a nostalgia mirror. Hold it up to yourself and it will show you the fond memories you have for classic Nintendo games (or the lack thereof).

To get the most from NES Remix 2, you’ll need a history with the Nintendo Entertainment System. That was true with the first game, and it’s definitely true this time around. This isn’t like the movie Moneyball or a reality show featuring celebrities. Both of those might seem like you’ll need knowledge of baseball or the featured celebrities’ careers, but you actually don’t need any of that to get enjoyment from watching those. That’s not the case with NES Remix 2.

The fun you’ll have with Nintendo’s latest walk down classic-gaming lane depends just as much on what you bring to the game as what it brings. That’s because NES Remix 2 available Thursday for the Wii U for $15, presents players with bite-sized chunks of late 1980s-era Nintendo Entertainment System games and kinda just says, “Hey, remember this?” 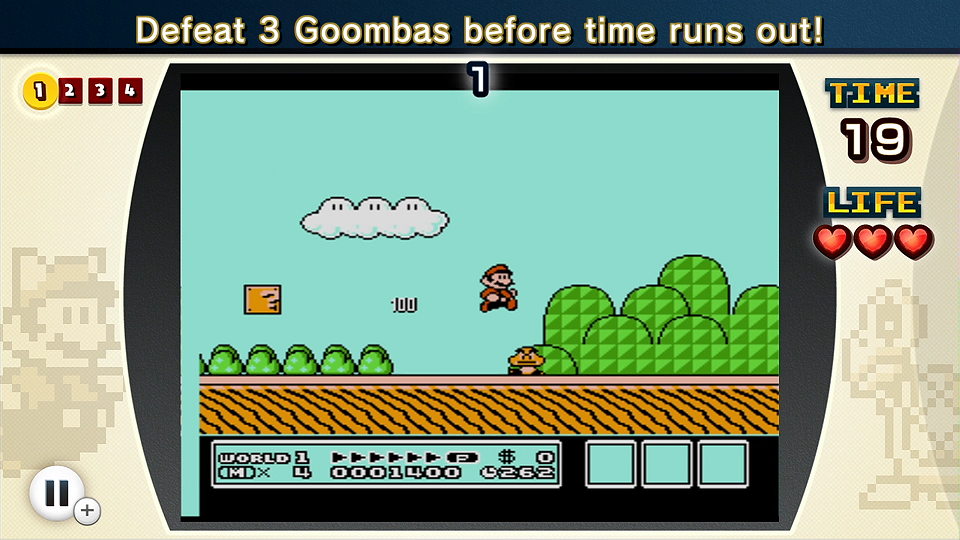 Above: Super Mario Bros. 3 is one of the best games in NES Remix 2.

Its attempts at updating and “remixing” the games into weird, new experiences still seem like they will only have an effect on those completely familiar with the original.

The good thing is that if you are in old enough to remember games like Super Mario Bros. 3, Punch-Out!!, and Kirby’s Adventure, NES Remix 2 is packing a lot to like.

Memorable games in the Remix mode

NES Remix 2 is the fast follow-up to the original, which debuted in December on Wii U. That game focused on early Nintendo Entertainment System releases like Balloon Fight, Donkey Kong, and Excitebike.

Those games certainly have their fans, but the bulk of original NES owners likely remember the system better for some of its later hits: Metroid, Super Mario Bros. 2, and Kirby’s Adventure. The more memorable games in NES Remix 2 make for a better overall experience. While not every game is a hit, most of those in the package are.

The developer breaks down its main mode into sections that include each game as well as Remix playlists.

In the playlists under Punch-Out!!, for example, players go from throwing basic punches to having to throw the perfect counter for Bald Bull to knock him out. As a huge fan of that classic arcade boxing release, it was fun to go through and get a “greatest hits” overview of the experience. It was still affecting even though I’ve played Punch-Out!! hundreds of times before.

The Remix playlists take the familiar and skew and transform them in ways that are sometimes subtle and sometimes extreme. In one stage, a Kirby’s Adventure boss fight might start out extremely zoomed out and it will quickly zoom in as you play through it. In other levels, you might play as Metroid hero Samus Aran as she blows through blocks to collect coins in Super Mario Bros.

It’s some cool “what if” scenarios, and each stage takes only between a couple of seconds and rarely more than a minute, which means you’re in and out before you have time to get bored.

One is a remix of the Nintendo World Chamionship game that the company used for its competitive gaming promotion in 1990. The World Championship game had players trying to get a top score in a little over 6 minutes in three minigames based on real NES releases. The first minigame had players collecting 50 coins in Super Mario Bros., the second had them finishing a special course in Rad Racer, and the third had them getting a high score in Tetris. 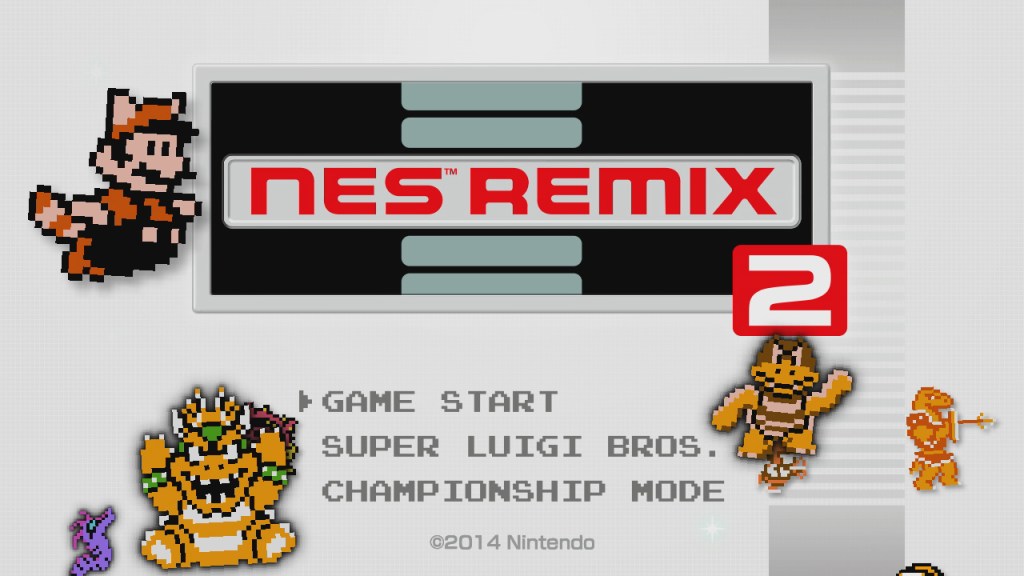 Above: This time, Nintendo included some bonus games with NES Remix 2.

It’s a pretty neat feature and a cool way to experience some Nintendo history — as the Nintendo World Championship cartridges are some of the rarest and most desired among game collectors.

The other bonus game is Super Luigi Bros, which will put you in control of Mario’s younger sibling in a completely mirrored version of the original Super Mario Bros. You’ll have to run from right to left.

I found this extremely interesting as the layout of the original game is etched permanently in my mind. It pounded against those ingrained reflexes in a way that no game really ever has before.

Again, this is something that will only really appeal to those who have the memory for it, but considering Super Mario Bros is one of the most widely played games of all time, it’s a smart inclusion.

NES Remix 2’s biggest problem is that it just doesn’t flow from one game to another very well.

It takes its time showing you your score after every level. When you unlock a new stage, it makes a point of showing it to you. It takes too long to reload a stage when you wish to restart.

This all creates a number of pacing issues that end up with you spending more time selecting games than actually playing them. With its bite-sized gameplay chunks, NES Remix 2 might work better if it just served players one stage after another in quick succession and then offered the menu on the side for those who want to choose their own experience.

If you don’t like one of the games, you’ll dislike significant portions of NES Remix 2

I didn’t know that I didn’t like Wario’s Woods until I played NES Remix 2. I have never touched it before encountering it here. It turns out that it is an obtuse puzzler with complex rules and convoluted controls. 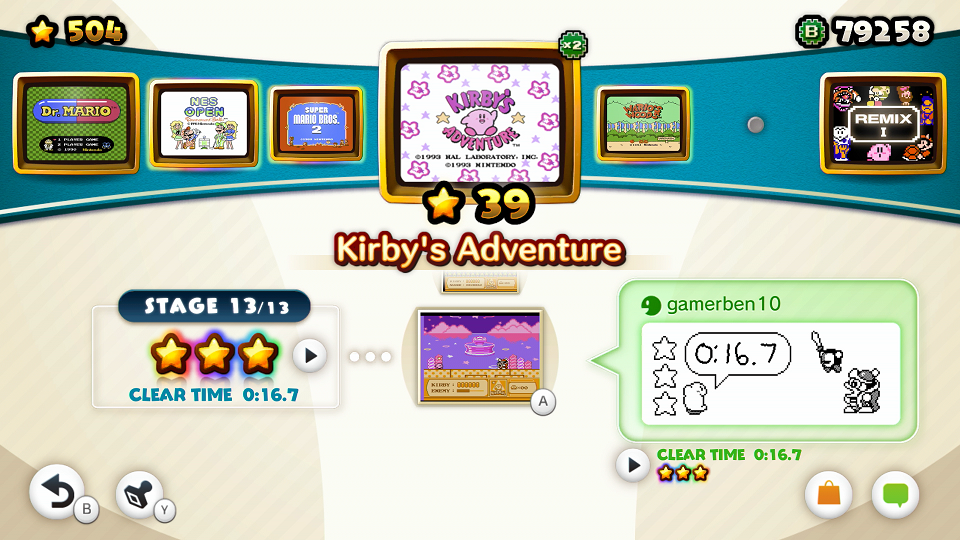 Above: I like Kirby’s Adventure, but if you don’t, then you might have big issues NES Remix 2.

I have no nostalgia for it, and it doesn’t even seem that good. The problem with that is the eight minilevels in the Wario’s Woods playlist is content I actively dislike. Any Remix stage that uses elements from the game is also lost on me.

I suspect that others might feel the same about Kid Icarus or Dr. Mario, and it brings me back to my original point: If you don’t bring a love for NES games to Remix 2, you’re wasting your time and money.

It’s good to see Nintendo flexing the strength of its back catalog. NES Remix was a nice start, and NES Remix 2 is an improvement. Plenty of people, including me, love this era of gaming, and this game does a good job of capitalizing on that.

I do hope that Nintendo continues on with this series into Super Nintendo and its later consoles. I also hope that if it does that, it improves the pacing of the games and finds a way to bring something for players who might only have experience with small portions of the Nintendo gameography.

Nintendo provided us with a retail download code for NES Remix 2 for the purposes of this review.