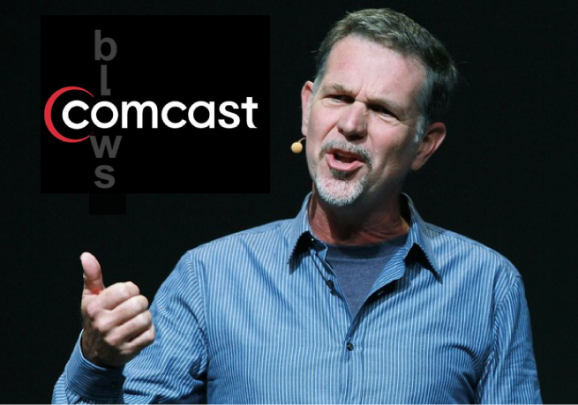 Netflix CEO Reed Hastings made it clear during today’s quarterly earnings video conference that his company is against the tentative merger of Comcast and Time Warner Cable.

Last month Hastings wrote an essay calling for federal regulators to create a new set of net neutrality rules that, among other things, would prevent ISPs from charging companies like Netflix to manage the delivery of traffic data to their customers, (aka paid peering). The essay came soon after Netflix reached such a traffic delivery agreement with Comcast, which Hastings said the company really had no choice but to do if it wanted to ensure its subscribers are able to watch reliable, high-def streaming content via its video service.

“We’re lobbying for this idea for no-fee interconnect, which is a stronger form of net neutrality. And now we’re in opposition to the Comcast-TWC merger,” Hastings said, adding that the combined entity would have access to 60 percent of U.S. markets where Comcast might be the only option for high-speed Internet service. “That’s a worrisome factor.”

Additionally, Hastings called out the merger as bad for the open Internet within its Q1 2014 letter to shareholders:

“Comcast is already dominant enough to be able to capture unprecedented fees from transit providers and services such as Netflix. The combined company would possess even more anti-competitive leverage to charge arbitrary interconnection tolls for access to their customers.”

But paid peering is not a new practice, and if Netflix wasn’t paying Comcast, it would be forging agreements with third-party companies like Cogent and Level 3. Still, Hastings said no-fee interconnect rules would be beneficial.

“It’ll work out over time if we can get to no-fee interconnect, not only for Netflix, but for Cogent, Level 3,” Hastings said during the video call. “We’re going to have a bigger, stronger Internet if we can get everyone to agree that that’s a better model.”

And as you’d imagine, Comcast was quick to counter Netflix’s stance.

“Netflix’s opposition to our Time Warner Cable transaction is based on inaccurate claims and arguments,” the company wrote in a statement. “There has been no company that has had a stronger commitment to openness of the Internet than Comcast, and we are the only ISP in the country that is currently legally bound by the FCC’s vacated Net Neutrality rules.”