Sometimes mashups are better than the original. Take that one Girl Talk song that combines Procol Harum’s “A Whiter Shade of Pale” with Youngbloodz’ “Damn.” That’s petty great — and now we have the equivalent for simple mobile games.

It’s called Flappy Bird 2048: Side by Side, and it has players controlling both Flappy Bird and 2048 at the same time. That’s right: Two of the biggest, most-inexplicable mobile hits of the last few months are finally working together thanks to indie developer Cheng Lou of Montreal.

Lou stitched together the games so that they are both running on the same page at exactly the same time. So, just like in 2048 (which is a derivative of Threes), players must slide numbers around a 4-by-4 field to combine them in an effort to get a high score. Only, in this version, every time you tap a key to slide the numbers in 2048, you also make your bird flap on the other side of the screen in an approximation of the arcade-style Flappy Bird mobile game. That title has players trying to navigate a graceless bird through an obstacle course, and in this version you’ll have to do that while also playing the 2048 puzzler

“It took me less than a day because both games are open source, and I literally took their code — gave the credits and tried to respect the licenses — and linked the keyboard detection together and the death detection,” Lou told GamesBeat. “So it was a very quick hack.”

When playing this side-by-side version, players can die in Flappy Bird (which is actually a Flappy Bird-like called Heavy Bird), but Lou punishes players who do by making a random move in 2048. So this isn’t just an exercise in mental juggling.

“The idea itself — I don’t think it’s that original,” said Lou. “Probably lots of people have thought of it. I saw a Flappy 2048 game, but it was actually a game about a block jumping over blocks, so in my disappointment I literally mashed the two games together and tweaked some parameters to make them less difficult.”

The game runs on the Web, but you can also play it on many smartphones using a browser. 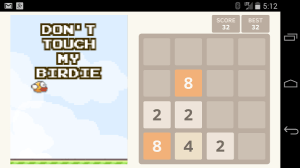 Above: The game running on Android.

As for Lou, Flappy Bird 2048 was an exercise to show how it easy it is to re-iterate on the Web. That’s something that is important to him. He thinks that game developers should embrace the Web — despite its drawbacks — because it enables creators to experiment so wildly.

“Ultimately, we want to lower the barrier between ideas and technical expertise,” he said. “And the Web lets you do that. You can publish something completely unpolished — just don’t sell it to the public — and iterate upon it.”