Two years after Lytro debuted its innovative light-field camera, the startup is back with something bigger and better in every way.

Lytro announced the Illum camera today, a new light-field camera that resembles a hefty DSLR more than the boxy camera the company originally launched in 2012. Light-field, or plenoptic, cameras capture all of the light in a given scene, allowing you to make significant changes to photos, like choosing different focus points, after you’ve taken them. Think of it like a step beyond the 2D photos traditional cameras take. 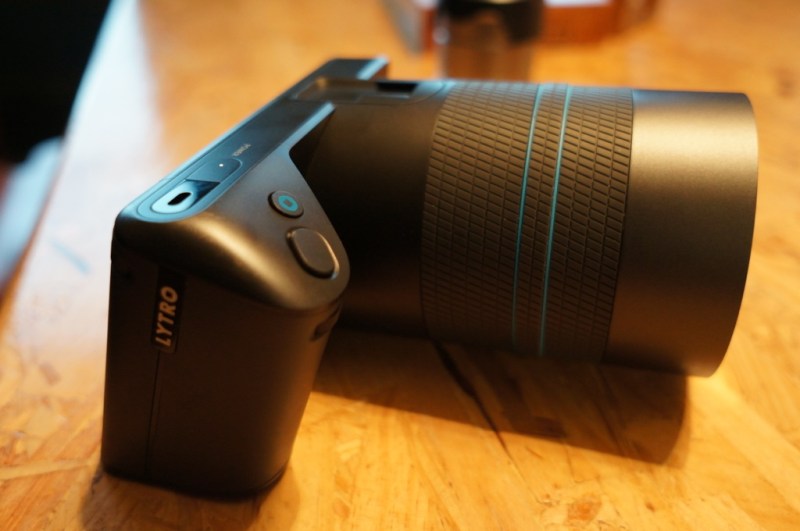 While Lytro’s first camera introduced the world to the possibilities of light-field technology, the company has evolved the technology to a point in the Illum where professional photographers may want to start using it full-time.

Dr. Ren Ng, Lytro’s founder, tells me the Illum is targeted at “creative professionals” — the type of artist who isn’t afraid to try new technologies and isn’t necessarily beholden to tradition. That’s a far more focused audience than the company’s first camera, which seemed more like a proof of concept to test the viability of light-field technology.

Using a new 40-megaray sensor (Lytro uses the term “megaray” to determine a single light field unit, its original camera only had an 11-megaray sensor), the Illum offers finer tuning for refocusing images and more advanced 3D viewing possibilities. Despite the megaray upgrade, the Illum only produces flattened 2D images between four and six megapixels.

Lytro has developed a new iPad app that takes advantage of the tablet’s gyroscope to let you view an image in pseudo-3D — you can tilt the iPad around to capture different angles of every scene.

Photos taken with the Illum and viewed through Lytro’s app feel more like scenes from reality frozen in time than just a flat photograph. Lytro has also developed movie-like techniques for smoothly changing the focus of images in animation. In the hands of a capable photographer, the Illum and Lytro’s technology can produce media that looks like a futuristic Ken Burns documentary.

You can get a sense of what the Illum can do with the interactive image below:

At first glance, the Illum looks simultaneously imposing and futuristic. Its massive fixed lens sports a 30mm to 250mm range (giving it the equivalent of an 8X optical zoom), and its aperture is a constant f/2.0 for its entire zoom range (typically unheard of in DSLR lenses). It’s powered by a Snapdragon 800 processor, which is used in high-end Android smartphones today.

The camera only has a few buttons, so most of your interactions with it will occur on the 4-inch touchscreen display, which can also articulate up or down for more acrobatic shots. The Illum also sports a high-speed shutter capable of capturing an image at 1/4000 of a second, which should make it ideal for capturing fast action (some of the sample images showed dirt and water frozen in midair).

Given the Illum’s cost and potential learning curve, it’s a big gamble for Lytro. The company has spent the past two years working on it, and it’s taken on around $100 million in funding from investors including Andreessen Horowitz and North Bridge Venture Partners.

Looking ahead, Ng and Lytro CEO Jason Rosenthal hint that the company is exploring ways to bring its light-field tech to video. That could allow cinematographers to completely rework many elements of a scene without having to reshoot. But given the amount of processing power required for the Illum today, it’ll likely be a few years until we see a Lytro video camera. (But the idea of Lytro’s technology combined with a virtual headset from Oculus VR leaves my mind spinning.)

Below, check out a brief chat I had with Ng, where he demonstrated some of the Illum’s capabilities.