SAN FRANCISCO — Are you a mobile addict? You probably are if you open apps more than 60 times a day.

That’s how Flurry, the mobile marketing and analytics firm that monitors data from 500,000 apps across 1.3 billion devices, defines a mobile addict. Simon Khalaf, the chief executive of Flurry, described the characteristics of mobile addicts in a talk today at the company’s Source 14 mobile conference today. 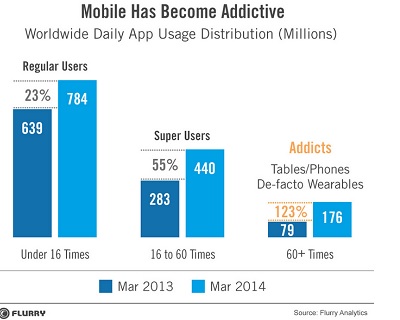 On average, a typical consumer launches apps about 10 times a day. Mobile addicts would probably suffer from the shakes if they tried to limit themselves to that level of activity.

Khalaf said that the mobile-addict segment is growing the fastest, posting 123 percent growth from 2013 to 2014. In March, the world had 176 million mobile addicts, up from 79 million a year earlier. Another category called “super users” grew 55 percent, and regular users grew 23 percent (for 16 times a day or less on opening apps).

“We were not surprised by teens being part of the group. Their youth coincided with the mobile revolution – they are not just accustomed to mobile, they expect their mobile device to handle nearly every type of task and communication,” Khalaf said in a blog post. “The same is true for college students who are noticeably avid users of messaging and gaming apps. We were also comfortable with young adults under-indexing. They have just entered the workforce, are predominantly single and are likely out and about more often than older and younger segments.”

But the results from older people were startling.

“What surprised us most was the overindexing of the middle-age segment and by a margin that beats that of teens,” he said. “But when we inspected that segment and their app usage, we came to the conclusion that these middle-aged consumers are probably part of a family and their devices are likely shared among multiple family members, including their children. Males and females in the middle-age segment both over-indexed on parenting and education. Males over indexed as catalog shoppers and females over indexed on sports. The picture we formed is a family of four, with two phones, one tablet, and all three devices shared by the family for education, entertainment and more utilitarian functions as well.”

Flurry said it monitors more than 150 billion app sessions each month. The company estimates it sees app activity from 90 percent of the smartphones and tablets around the world, one-third of all app sessions, and seven apps per device.

“Every year, a new industry is disrupted by mobile,” Khalaf said.