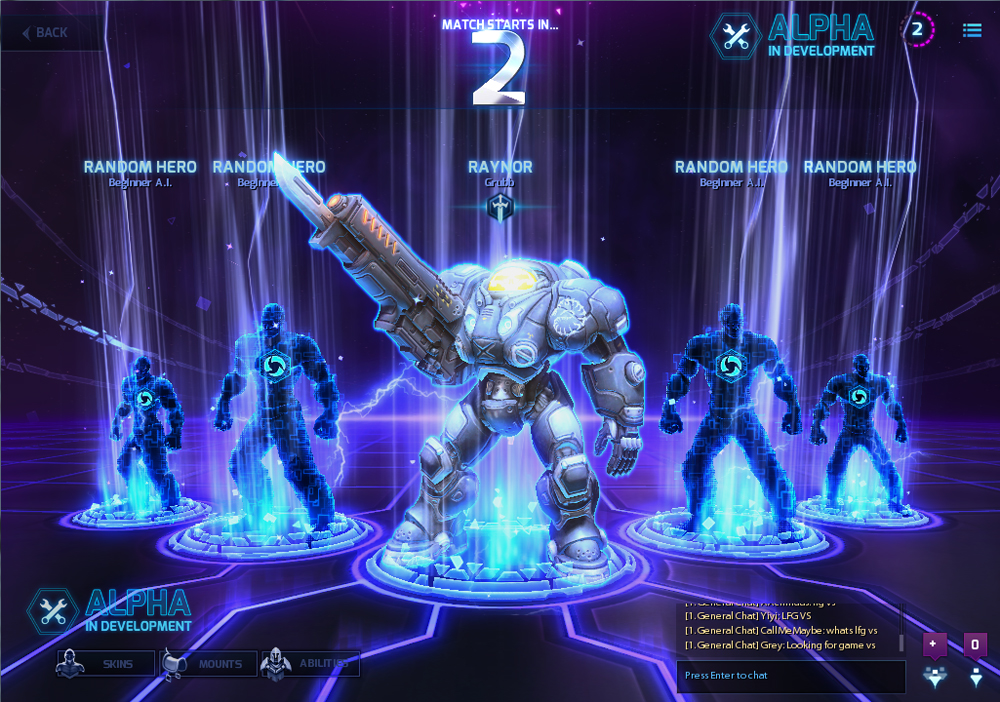 Above: The early training mode matches you up with AI teammates.

Putting the ‘T’ in Team

In Dota 2 and League of Legends, players level up individually, which is another motivation to focus on individual accomplishment. In Heroes of the Storm, entire teams level up together, which means players may be more willing to experiment with character types like support classes, which don’t do as much damage and therefore don’t get as many kills.

Team leveling also means Heroes of the Storm players may be more willing to slide naturally into archetypes they’ve learned from MMO play. “We have some pretty powerful support classes, because our heroes don’t need to earn. None of our heroes need to get kills to get anything right. They just need to help the team,” said Browder. “So we have a character that’s a very dedicated healer. That’s their job. Follow the big guy around, keep him standing. That’s your job. And that can be, for some players, an easier job than worrying about trying to physically dance with another player.”

Heroes of the Storm also introduces a new type of class, the Siege character, who focuses on dealing massive amounts of damage at long-range. “I’ve had people tell me they just want to kind of PvE [player vs. environment]. I’m like ‘Well, I’ve got a couple of classes for you.’ Just go out, don’t even worry about the other heroes,” said Browder. “If you see another hero, get away from them. Just focus on towns, focus on minions, don’t worry about it. Your job is to blow up those NPCs.”

In Heroes of the Storm, neutral characters are called “mercenaries,” and if players do enough damage to them mercenaries will join the fight on their side. This introduces a new tactical element.

“So there’s a bunch of siege giants. When you beat up the siege giants, they carry these big rocks with them, and they’ll walk up the line and start hucking rocks at enemy towns. And they have range to outrange the fortifications that are in front of them, so it’s a problem,” said Browder. “You can’t just wait for your [minions] to push them off. They’re going to destroy something. They’re going to keep going unless an enemy Hero gets out there and deals with it, so you’re sort of creating problems for the other players.”

“A lot of stuff we’re doing is, trying to, instead of just I go out and I get more powerful, I go out and create gameplay for you,” said Browder.

“You always see the siege giants, no matter what battleground you’re on, they always have that same visual cue even though they’re cosmetically different,” said Gonzales. “And you’re like ‘Oh, siege giants. Yes, those would be helpful. Or the knights.’ There’s always that consistency, and it’s very reliable, and it’s very easy to interpret.”

“I don’t know that it is simpler. It may be more complicated. It’s hard for us to know. We’re kind of creating the game we want to create. And sometimes it’s simpler, and sometimes it’s not,” said Browder.

MOBAs, ARTS, hero brawlers — I still think all these different appellations are kind of silly. Dota 2, League of Legends, and Heroes of the Storm are really all of the same genre at their core. What differs between them is how they’ve chosen to either stick to the formula established by Defense of the Ancients or to evolve the core game rules — and then in which direction to guide that evolution.

Riot Games added complexity with League of Legends. Blizzard is simplifying things with Heroes of the Storm. I’m patient with ARTS, “action real time strategy game,” because it does sound a little more complicated than MOBA, “multiplayer online battle arena,” which sounds vanilla. So if Blizzard wants to call their evolution of the genre a “hero brawler,” so be it.

At least they’re not calling it an HB. I think that’s where I’d have to draw the line.