I was a pretty big fan of Final Fantasy XIV: A Realm Reborn on the PC. It’s a gorgeous massively multiplayer role-playing game with lots of variety and flexibility.

However, I wasn’t as enamored with the PlayStation 3 version. While technically the same game (PS3 and PC folk even play on the same servers), using a controller instead of a keyboard felt clunky. Worse, it just didn’t look very good on Sony’s aging system, especially when you compare it to someone running A Realm Reborn on a high-end PC.

Square Enix has now released Final Fantasy XIV on its newest console, the PlayStation 4. Should PC players convert and buy a PS4 copy on top of their existing account? Should anyone playing the game on a PS3 bother to take up the offer for a free upgrade? Here are the pros and cons of the PlayStation 4 port right now. 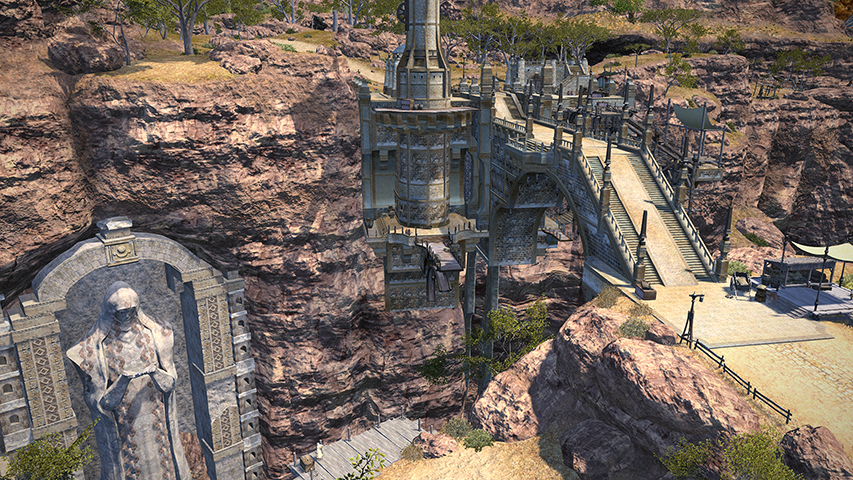 Above: Final Fantasy XIV: A Realm Reborn has some stunning locations.

As with most MMOs, your activities in A Realm Reborn split between group-based adventures and individual endeavors, like questing and crafting. Soloing is usually less stressful, since your actions can’t potentially kill your entire party. Solo quests are also easier than multiplayer dungeons, which involve intricate strategies to take down difficult bosses. Most of the quests you tackle alone just require your basic offensive abilities to beat, and you can take as much time doing most of them as you want.

While you might have a difficult time targeting and accessing all of your skills in a dungeon, you can easily map out all the abilities you’ll need for solo questing to the controller’s face buttons and D-pad. The same goes for gathering and crafting, which use their own abilities that you can also map to the controller.

Most MMO players have become accustomed to navigating with the WASD keyboard buttons, which somewhat awkwardly causes our avatars to strafe and back step more than any normal person ever would if they had to fight a dragon. However, the PlayStation 4’s analog stick provides for, well, analog movement. You have a full 360 degree range of motion available at the disposal of your left thumb. It makes maneuvering and travelling much more enjoyable. 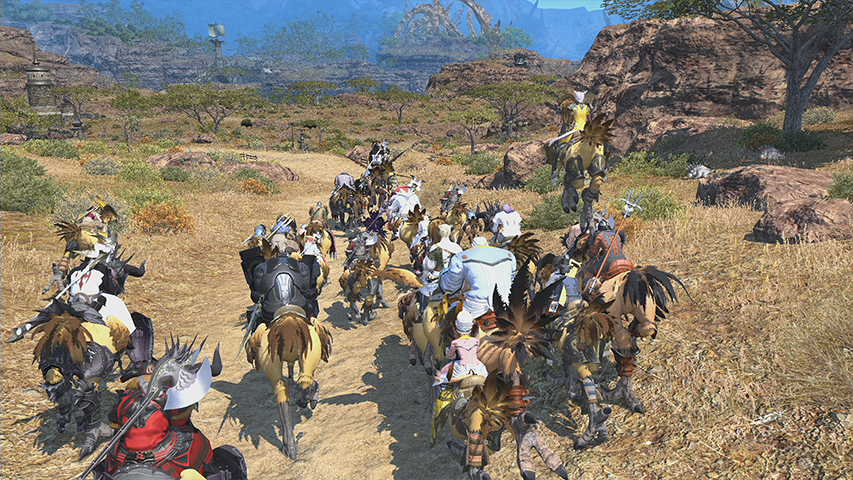 Above: Time to party up.

Of course, everything nice I’ve said so far about the PS4 version was also true on the PS3, but the graphical difference between the two is staggering. While the PS3 version suffered from constant frame rate issues and a lack of sharpness, A Realm Reborn on the PS4 definitely looks like a next-gen game. The MMO runs smoothly and offers some dazzling sights, like colorful sunsets on the beach and towering castles ominously lurking in the distance.

The other noticeable inclusion in the PS4 version is the use of the controller’s touchpad. Basically, you can swipe your finger on it to move a cursor around the screen, sort of like how you would with a mouse on a PC. This helps to make menu navigation, a huge problem with the PS3 version, much more manageable, even though you’ll have a bit of an awkward time moving the sensitive cursor around the screen.

What doesn’t work so well

Keeping track of your abilities

Dungeon runs require a lot of teamwork and precise skill use. So while you can comfortably map all of the spells and abilities you’ll need for soloing to the D-pad and face buttons, you’ll have to put situational skills on another set, which you can switch to by using the L1 and R1 buttons. So, yes, you can still access all of your spells, but it becomes a lot harder to keep track of them, especially when you need to cast a specific one immediately or else your party dies.

It’s not a problem at first when you simply don’t have that many abilities, but you eventually earn a lot of skills from your class and later from your job (a sort of advanced class you eventually unlock). In A Realm Reborn, you can also equip a few spells from other classes that you’ve trained up. Essentially, it’s a lot to keep track of. You can manage it fine with a keyboard and all of the buttons it offers, but it becomes a bit cumbersome with a controller. 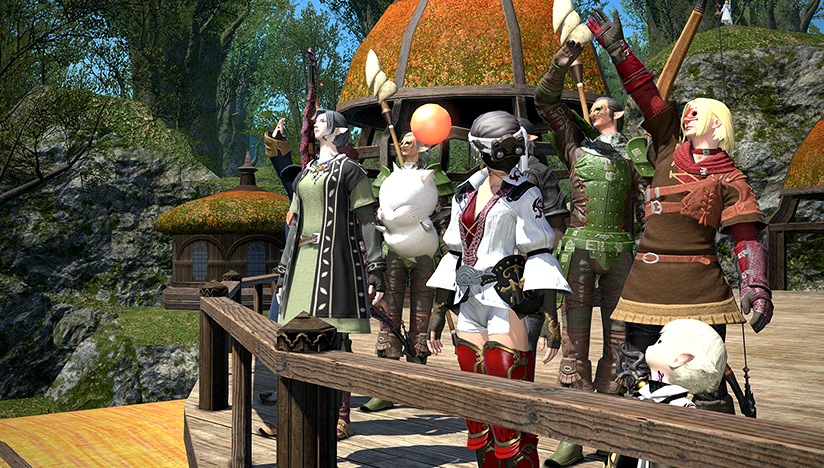 Above: They’re probably look at something all high-res and pretty.

This is another problem that the PS3 shared; it’s a lot harder to target friends and enemies without a mouse. Instead, you have to scroll through every nearby target with the D-pad. This can get a little annoying when you’re alone, but it becomes a huge issue when you’re fighting a room full of enemies and allies that you constantly need to switch your attention between.

I said before that the PS4’s touchpad makes navigating menus and pop-up screens easier than it was on the PS3, but it’s still nowhere near as nice to handle as it is with an actual mouse and keyboard. The touchpad cursor is finicky and easy to lose to track of, and you can have a hard time getting it to stop exactly where you want it to. Also, with a keyboard, you can access any menu just by clicking on a specific key. With a controller, you have to scroll through a list of them before finding what you want. 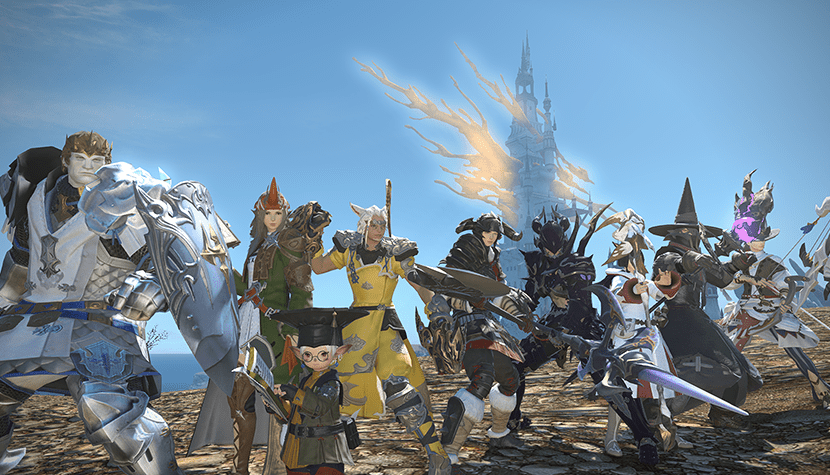 Of course, the PS4 version does support a keyboard and mouse, something the PS3 port didn’t. If you use one, A Realm Reborn becomes very similar to the PC experience. However, if you’re looking for an MMO that you can comfortably play on the couch with a controller, Final Fantasy XIV on the PS4 is certainly a worthy experience. It controls fairly well, especially if you focus on solo quests (which you’ll find plenty of).

It’s also a noticeable upgrade from the PS3, with significantly improved graphics and better menu navigation thanks to the touchpad. You also can also use all the standard PS4 features like remote play on the Vita handheld and easy photo and video sharing.

Before, I said that A Realm Reborn on the PC was a gorgeous MMO with a hundred smart ideas and small touches. The PS4 version is a great way to experience all of them, although I think I’ll mostly stick with my PC.