The Watch Dog app lets you send police assets in pursuit of a fleeing vigilante.

Ubisoft’s upcoming video game Watch Dogs is totally fun to play as I discovered in a hands-on demo of the cyber-hacker vigilante game at a preview in San Francisco. But I was surprised to learn how much I enjoyed playing a companion mobile app, where you can get an overhead view of the city and dispatch resources to track down a fleeing vigilante.

The mobile app, called “ctOS mobile,” debuts alongside the May 27 launch of the video game. It will entertain players when they can’t be in front of the console or PC in their homes. The app lets two human players square off against each other across a platform divide. It is an example of the future of gaming, with seamless play across consoles, PCs, mobile devices, and smart TVs.

One player becomes Aiden Pearce, a vigilante and fugitive who is trying to escape from the cops. The player gets into a car inside the Watch Dogs console or PC version and then tries to get away. You have to drive like a maniac to do that.

The other player is in a police helicopter overseeing the chase, using a mobile tablet such as an Android or iOS device. While the fugitive player tries to get away, the pursuing player directs assets such as a chopper with a sniper, a swat team, and up to four other police cars.

But the player controlling Pearce can see a first-person view of the streets and the enemies chasing him. He has a tactical advantage, but the other player has a strategic advantage because of the overhead view. That comes out to pretty balanced gameplay, said Philippe Baude, the lead game designer of the app, in a briefing.

By tapping the screen, the mobile-app player can activate assets on the ground, such as road blockers that rise from the street to cut off an escape route. The player can also cause a traffic jam at an intersection or dispatch squad cars that can drive at the fugitive from different directions. And the player earns more resources to dispatch by keeping the police helicopter exactly above Pearce’s car.

Pearce tries to drive through 15 different checkpoints before the cops can nail him. I played as both the pursuer and the fugitive.

It takes a couple of practice runs to get used to what’s happening on the screen as it all takes place with split-second timing. I managed to corner my human opponent a couple of times by using quick combinations of roadblocks and chase cars. You have to think far enough ahead to figure out how to trap the fleeing car.

I also played Pearce. I almost made a good escape when the cops raised a drawbridge on me. I gunned my engines to make the leap across the water, but I fell short and crashed into the river. It was a fast and furious game that provides a nice action-packed snack.

Every now and then, I felt like the touch screen wasn’t exactly responsive to my commands, but you have to be careful about how you swipe the screen. And there are so many icons on the screen, each representing different resources, that I became confused sometimes while trying to act fast. But overall, it’s a very cool idea that is well executed. 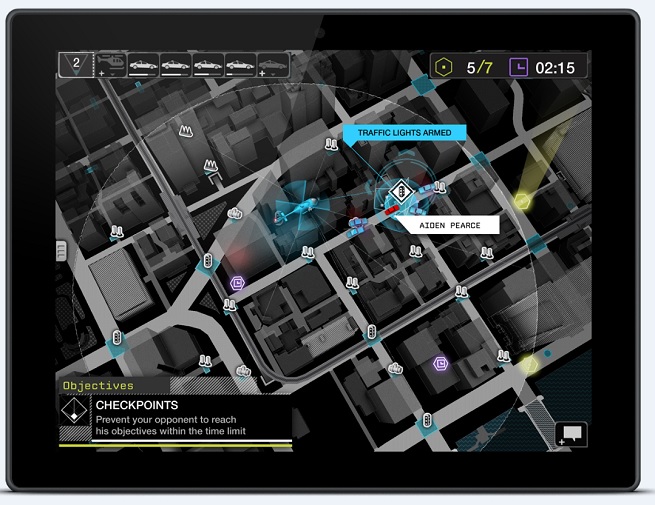