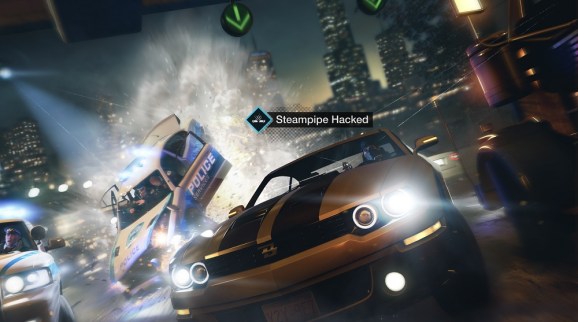 This preview has some plot spoilers.

SAN FRANCISCO — Ubisoft’s designers have succeeded in creating an immersive open world with Watch Dogs, a video game set in a smart city where a hacker takes control in order to inflict his own brand of personal vigilantism.

Under development for more than five years, Watch Dogs is one of the biggest games premiering this year. The French game publisher plans to release it on May 27 across a bunch of platforms. Unless Ubisoft messes up, this game is going to be a blockbuster.

At an event last week, I played a preview version for a few hours. Clearly, the project has benefited from months of delay (it was supposed to be published last fall). It’s a polished experience, and if the rest plays as well the parts that I went through, it could have the potential to be one of the best video games of the year. 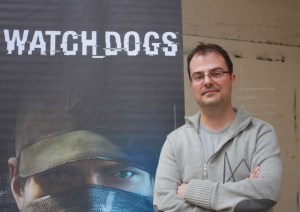 “We’re almost done,” said Jonathan Morin, the creative director, in an interview with GamesBeat. “We’ve had a delay. We have tweaked things and are pretty happy with where it is.”

Watch Dogs is a unique experience in video games, with gameplay that is a mix of the open world of Grand Theft Auto and the gadget-driven stealthiness of Splinter Cell. You play as Aiden Pearce, a hacker who brings his own street justice to the city of Chicago. You can be a good Aiden, solving crimes and rescuing people from bad guys. Or you can be a bad Aiden, slaughtering criminals in the name of vigilante justice.

The subject matter has also become much more topical. When it was conceived, smart cities were a vague notion. Now they’re becoming a reality as companies like IBM make them into a centerpiece of their technology services. And the downside of excessive monitoring has become more obvious with Edward Snowden’s leaks of spying by the National Security Agency.

“IBM doing smart cities, we knew about that a long time ago,” Morin said. “We looked a lot at what Dubai was doing five-and-a-half years ago. They have an entire department, almost a governmental movement, that’s sending choppers to deal with accidents and stuff like that. They have a whole set of interesting TV spots that talk about services and urbanism. I think it’s natural that reality has caught up. Where I had no idea that it would go so deep is the timing of all that news, though. With Julian Assange, we already knew he was part of the picture. He was big news at the time. But now you have the timing of the NSA leaks, the Edward Snowden affair. It was like there was some new big thing every week.” 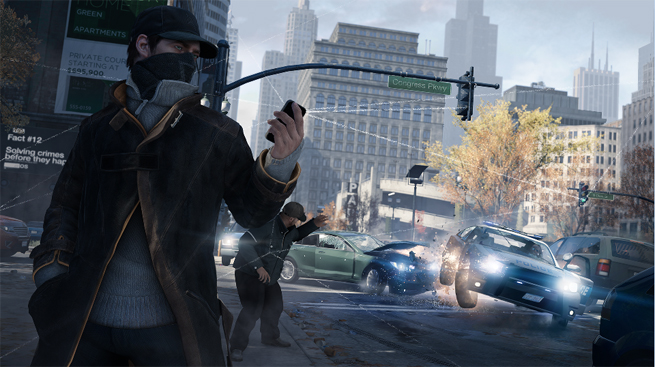 Above: The main character of Watch Dogs hacks Chicago’s smart city’s nervous system and uses it for his own purposes.

Pearce uses his smartphone to hack into ctOS, the city operating system that controls the infrastructure of the realistically rendered Chicago. He breaks into neighborhood control centers and then uses the infrastructure for his own purposes. He can get access to everything. He can intercept phone calls, listen to voice mail, hack bank accounts, or use security cameras to spy on bad guys. When cops are chasing him, he can activate road blockers that the pursuing vehicles will crash into. He can turn all the signals to “green” at an intersection and cause a huge wreck as a diversion.

This MacGyver-like capability to use technology to set traps for the bad guys is part of the core fun of Watch Dogs. It’s a great feeling when you can cause a traffic accident, take out a target, and then escape by jumping onto a speeding train. You can use your cyberpower to turn the tables.

But you can also use it in more questionable ways, like using a smartphone to listen in on a private conversation where a wife says to her husband that she can no longer afford to keep him on life support. At this heartbreaking moment, you feel like a voyeur, sucked into a world of secrets but unwilling to look away.

Watch Dogs appeals to our sense of curiosity and obsession, Morin said. The hacking ability is the ultimate Orwellian power of Big Brother — put in the hands of someone who wants to bring down the system. But Pearce’s hacking has its consequences. He angers some of the wrong people, including a former mentor, Damian Brinks. The bad guys take their anger out on Pearce’s family, killing his 6-year-old niece while she’s under the Pearce’s care. That puts him on the course of being a vigilante, and it is just one of the plots cooking in Watch Dogs.

A story of vigilante justice 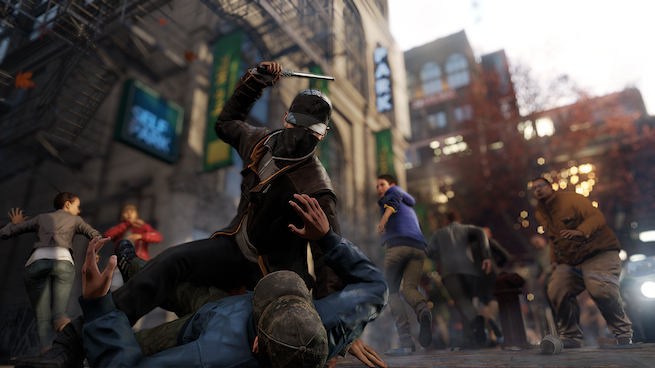 Above: Ubisoft’s near-future hacking game Watch Dogs is a Microsoft Xbox One launch title. It comes out Nov. 19. Does this mean the Xbox One comes out that day as well?

At the beginning of my preview, Pearce interrogates a thug named Maurice, who knows something about who caused the niece’s death, in the depths of stadium. During the interrogation, you get the choice of either shooting Maurice or letting him live. Then Pearce’s friend, Jordi Chin, takes out a bunch of gang members. Pearce has to evade the police by creating diversions and escape. One of the biggest diversions is to create a blackout that puts the stadium into darkness — and chaos. 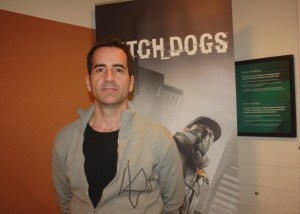 “Here’s this modern-day vigilante who’s tormented by guilt over the death of his niece,” said Kevin Shortt, the lead story designer on Watch Dogs, in an interview with GamesBeat. “He’s trying to find the people responsible for that. At the same time, he’s a bit overprotective, obsessively so, about his sister and nephew.”

In another scene, Aiden shows up late to his nephew’s birthday party. The boy is despondent about losing his sister a year ago, and he hasn’t talked to anyone except his mother since. A crank caller from an anonymous stalker calls the house, and Aiden sets out in pursuit of him. He steps outside, uses his hacking ability to quickly identify the suspect, and then pursues him in a car chase. Once Aiden catches him, he can administer his street justice.

But the plot has many more hidden elements.

“He hacks into ctOS, tries to take more control of ctOS, so he can turn the city against Damian and try to stop him,” Shortt said. “But as he does that, he starts to realize there’s something more going on inside ctOS. There are secrets and lies interwoven in all of this. His personal story, while wrapped up in the whole story, starts opening up into something bigger and more sinister.”

I tried out the beginning of the single-player campaign, a part of a later stage, multiplayer, and the companion app. Each of those experiences was a lot of fun. If I had a complaint, I felt like there were too many different things to do. As a result, I didn’t have a linear path to pursue to stay focused on the story. I would finish one campaign mission and then wonder where I was supposed to go next. You can look at the map to see the “campaign” icon for your next mission, but the game doesn’t naturally prompt you to go there unless you take it upon yourself to do it.