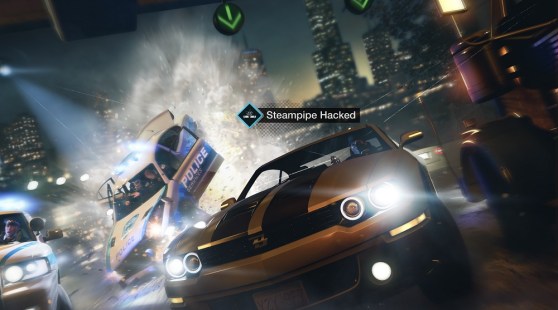 Above: A car chase in Watch Dogs.

Instead, you may find yourself wandering aimlessly, performing less important missions while threats to your family go unaddressed. That reduces some of the narrative’s tension, where your mission is to be a vigilante.

Wandering around is fascinating. You can actively hack the smartphones of passersby, stealing money from their bank accounts. If you press a button on the controller, you can activate the “profiler.” That sends out signals to all of the nearby devices and gives you information about them. If you hover over a person, you can find out salient facts about them like “being blackmailed” or “addicted to antidepressants.” Since these elements can be procedurally mixed and matched, it has no end to the number of personal stories associated with the random nonplayer characters you meet on the streets.

If you keep doing this long enough, you can get wind of an impending crime that the ctOS is predicting. When that happens, you secretly stalk the suspect and then intercept them just before they commit the crime. You can chase them down and kill them if you like, or otherwise deal out lesser punishments. Many of these encounters will determine what kind of vigilante you will be, and that has bearing on the main plot.

When you complete a mission, you get paid. You can use the money or the experience to level up. When I did a few missions, I was able to gain access to road blockers, which you can activate during a car chase, pushing up roadblocks behind you as the police give pursuit. I tried using this roadblock a few times but did it too early, wrecking my own car in the process.

While you can spend a lot of time playing vigilante as if you were in a modern-day Death Wish, it pays to come back to the main story and the missions associated with it. It doesn’t have different branches with four different endings. Shortt says there is ultimately a single path to a single ending, where Aiden undergoes a transformation.

“We want players to have a singular journey, the same experience, so that they can have a discussion,” Shortt said. “It’s like when you go to the movies. You and I go to the movies and see the same movie, but we come out with different opinions, and we can have a discussion about that. Oh, you thought this guy was behind all of it? No, I didn’t think so. Here’s the conspiracy we think is going on. You get to have that discussion because we all end up at the same place and come away with the same events we can interpret how we want to.”

Above: The Watch Dog app helps you send police to pursue a fleeing vigilante.

I found one small bug. I maneuvered my way into a fenced compound. But on my way out, I couldn’t escape because a forklift I needed to scale the fence wouldn’t activate. That’s not a big deal, but it’s an example of just one small thing that can go wrong in programming a vast world. And if there are many such bugs, the player won’t feel as immersed in the virtual environment.

Ubisoft’s designers made the world seem so much more real by inserting human intelligence into the single-player. A multiplayer hacking can be initiated at just about any time, where another human player can come into your game and try to steal data from Pearce’s smartphone. If the player succeeds, he steals Pearce’s stuff. But if Pearce can identify and kill the human player amid a sea of nonplayer characters, he can stop the attack. You can also use an iPad app to play out police chase scenes against players in the video game as they drive a car to escape the cops you dispatch via an overhead map on the iPad. 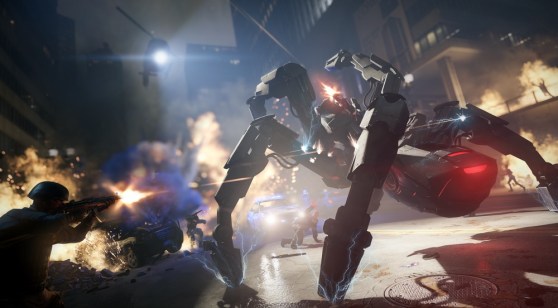 I felt like there were a few too many things to do. You can engage in some minigames by going to a section of the smartphone-like interface. You can put yourself into a mechanical spider that can fire explosives. The cops will come chase you down, and you can mow them down with your spider’s arsenal. The minigame is entertaining, but it has no bearing on the plot and seems really out of place in the city that doesn’t have other sci-fi features. It’s an example of trying to please the action buffs in the audience, rather than making the world completely consistent and focused on delivering a single story.

I would have been happier if some of the basic combat systems were more robust. In one episode, you have to set up an ambush, planting improvised explosive devices (IEDs) and other booby traps to interrupt a crime ring’s drug deal. You can blow up the IEDs, but then you have to face off against a half-dozen enemies. The third-person combat isn’t that easy to control. It takes a while to aim and fire, making the combat a little clunky. As a result, I died multiple times before I finally completed the mission.

Fortunately, that ambush led to one of the more emotionally moving scenes. As you pursue an escaping criminal, he leads you to his leader, Bedbug. Then Pearce decides to torture Bedbug by calling him on his cellphone and telling him things that can only be known via eavesdropping. Bedbug goes nuts with fear, and you almost start feeling sorry for him. The game plays with your emotions, and the scene is a small reminder of just how entertaining Watch Dogs can be. 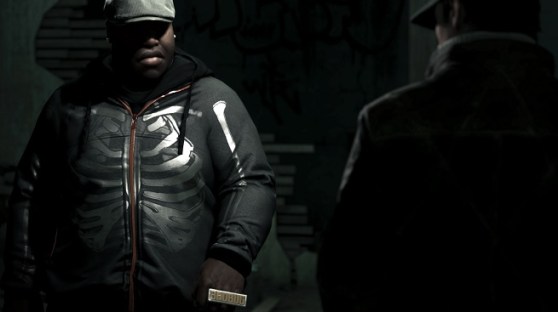 Above: Watch Dogs’ Bedbug before he freaks out.