If there’s one thing we really love, it’s mysterious companies flying under the radar and secretly building things — that is, until they publicly file financial documents and we discover their existence.

Yesterday, a stealthy startup called Snowball quietly submitted a Form D to the U.S. Securities and Exchange Commission. Thus far, the company has only raised about $45,000, but seeks to reach a total of $850,000 in exchange for good ol’ equity, according to the document.

Not much is known from the document, except that the company is based in San Francisco, Calif., that three investors have signed on so far, that the company was founded in 2013, and Johannes Seemann is listed as chief executive and Jeff Cunningham as presumably another founder.

Snowball’s website and AngelList profile reveal a different set of clues. The company is building an iOS app with the purpose of making social networking better, less noisy, and more personal. Its AngelList profile says:

Imagine exchanges, not just monologues. Is there anything more beautiful than a simple conversation? Dialogs evolve, enriching our perspectives. The back & forth is the whole point.

Snowball enables you to engage with friends and the world through collaboratively created conversations. We are working in the gap between online social networking and real-life social exchanges.

Update: Snowball sees itself as “not so much a social sharing app but more about enabling deeply collaborative experiences,” Cunningham said to VentureBeat in an email reply to our inquiry about this public filing.

With a little more digging, we also found that both Seemann and Cunningham are former IDEO designers, signaling that much of Snowball’s approach will be a design-based solution, rather than say, building new or different technology to help address the problem they perceive.

Its name also suggests that the app’s concept could center around the idea of interactions “snowballing” into threads, possibly mixing different kinds of media (text, photos, and so on). 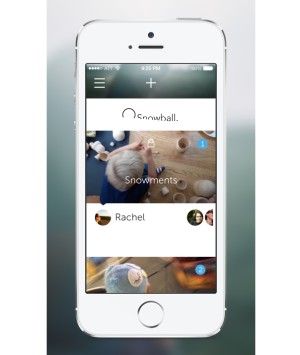 We’ve reached out to the company and will update if we hear back.