Nothing like a study to confirm what we suspected all along.

Samsung Galaxy users are barely using the pre-installed apps that are shoved in their faces, according to a recent study by technology markets research firm Strategy Analytics.

The results? The total amount time spent on average on pre-installed apps in S3 and S4 devices came in at a jarringly low 7 minutes. This is in spite the fact that Samsung claims to have over 180 million users registered to its “popular” Chat On messaging app.

Here are Strategy Analytics’ charts comparing app usage across  the S3 and S4. 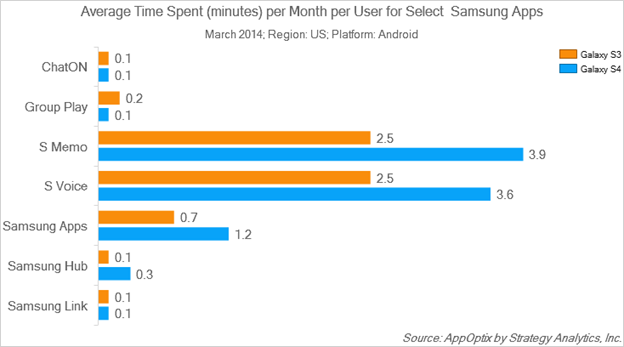 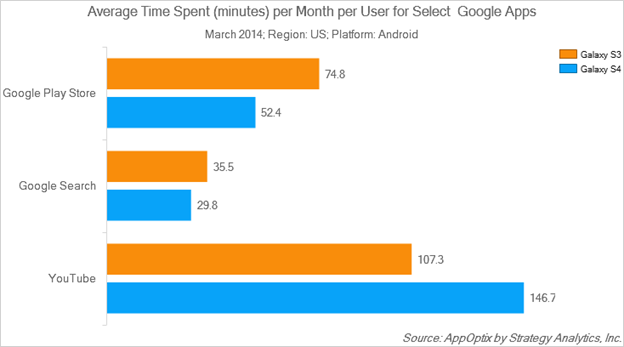 They don’t paint a very flattering picture for Samsung’s firmware. If this seems out of sync with the total average time that Strategy Analytics came up with, it’s because the firm calculated the average total usage across the different generations of devices taking into account the different sizes of the user base.

Fortunately, Samsung barely seems to have gotten the memo on bloatware in time for the S5. Reviews of the latest iteration of the Galaxy S line initially celebrated the pleasant absence of the usual boatload of pre-installed firmware. However, a closer inspection indicated that Samsung was still up to its old tricks, as firmware seems to take up over half the storage on the base 16 GB S5 model. It just was not making a show of it did when emphasizing proprietary features with the Galaxy S3 and S4.

Despite the numbers, Strategy Analytics Vice President Barry Gilbert is excited about Samsung’s ability to expand the reach of its proprietary software given the popularity of its devices.

“Samsung really has an opportunity to go beyond the more traditional functionality of apps,” Gilbert said in an interview with VentureBeat. Gilbert noted that in order to draw more users, Samsung should create apps with more specialized functionality.

“This is not going to happen overnight, but I think they’re moving in a positive direction,” he said.

A Samsung representative said the company that was doing its best to meet consumers’ needs.