For almost six years, Jonathan Morin has been working on Ubisoft’s Watch Dogs. As the game nears its May 27 launch date, he can finally mollify those who want to play it by saying that the wait is almost over. This has become one of the most-anticipated titles of the next-generation, and Ubisoft’s confidence showed at a recent preview event in San Francisco, where Morin showed off its gameplay.

Ubisoft wants the tale about hacking a major American city — and its main character, Aiden Pearce — to become a multigame franchise as well as a cautionary tale about the perils of modern technology. But it’s only going to fulfill that promise if Watch Dogs is polished and immersive at its launch. So Morin has no regrets about a recent delay and how long it took to create the innovative gameplay that we’ve only gotten a taste of so far.

So what took so long? Check out our interview with Morin below. 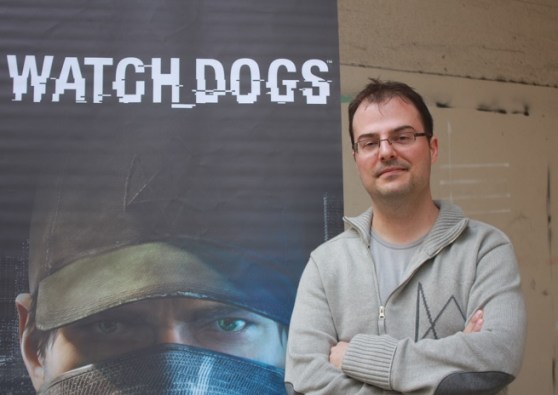 GamesBeat: So, you’re at the point where it’s almost wrapped up now.

Jonathan Morin: Yeah, we’re almost done. There’s been a delay, so we can tweak certain things, and now we’re pretty happy with where it is. It’s been a month of full debug, so it’s at a state where the programmers are finished. They can detect a bug and repair it without changing the nature of the game. Aside from some very minor fine-tuning, you’ve tasted what the game is going to be.

GamesBeat: From the time you’d expected it to come out to now, do you consider that polishing time?

Morin: “Polish” is too big of a word. It’s several things. When you make a game that’s so open, it starts out pretty linear at the beginning, while it’s teaching you stuff, but it opens up really fast. We’re trying to make the hacking very accessible, to encourage players to dig into the system and start messing around with people, start being more creative.

Six months ago, what happened was, I think we were successful doing that, but for some players – the best players, the ones who really got it, got deep into expression – sometimes the systems didn’t communicate really well with each other. You could have little moments that were awkward, that felt like the game was not supporting your creativity anymore. It was like a scientist in a lab who tries vaccine and finds out that it doesn’t work in every case he thought it would. You can’t just say, “No problem, in a couple of weeks I’ll fix it and it’ll be done.” 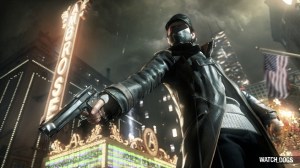 We delayed the game to fix that problem, and that was why there was no date attached to it. The date came after. What we said instead that we would delay, and then make a plan together to fix whatever we found. We gave ourselves two five-week sprints to deal with the most core elements of that plan, and then playtested to see how it felt. We adjusted and added the rest of the plan. After we did all that, we sat down again and talked about what was there.

In the end, it felt like there were no more of those disappointments in the way the systems connected with each other. It felt like the Watch Dogs we wanted to ship.

GamesBeat: Do you think it’s a different game this year compared to what it would have been in 2013?

Morin: It’s not a different game. I think it’s a more accurate game. Let’s say it that way. It’s not easy to make a game that gives a lot of power over what the game will be to the player. The player is a big part of his own experience and how it feels.

GamesBeat: So you don’t want players to be able to break it.

Morin: Exactly. The way I see it, if the player breaks it, it’s the game’s fault. You need to fix that, and let the player just enjoy it. If he steps back and says, “I didn’t like this and this. The game brought me somewhere I didn’t want to go,” that’s a flaw in the game. 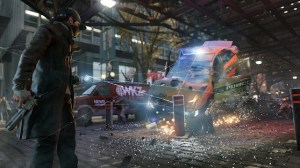 GamesBeat: I imagine that if you started with an idea and never changed that idea and finished the game, maybe you could do this in two or three years. Did you zig-zag a lot over the course of this game?

Morin: The very first slide on a PowerPoint – no game, nothing running – was a red button with a hand, like this, and written underneath it said, “Control an entire city with a single button.” That was five-and-a-half years ago. So yes, there’s that, and forging an entire universe and everything. But I don’t know. When you build something new, it’s always quite long.

What justified the time for me were two different things. One, we had very new gameplay in certain aspects of the game. What is a profiler? How do we build that? How does the player understand that? How is it not oppressive in terms of the HUD? We did a lot of R&D on that. How do you build an AI like that? There’s a lot of challenges on the how-to side for all aspects of the game in Watch Dogs.

The second part is, what is Watch Dogs? It’s a new IP, a new game. Nothing was defined about it. Those challenges together, it’s all about getting precise as far as what that game is and why we need each element. That’s a lot of work. Sometimes it’s not the game directly. Sometimes it’s more like, what is the universe? How do things look in it? You can spend a lot of time on just things like, “What should that one guy there look like?”

Spending the time is justified, in the end. We didn’t want to ship a half-done product.

GamesBeat: What do you think, after all of this, the innovations are in the game, things that gamers haven’t seen before?

Morin: Innovation is a big word, depending on how you’re looking at it. For me, too many games have focused on executing stuff that we’ve already seen. I’m not saying that in a very negative way. I’m just saying, when I was younger and playing games, a big part of my brain was activated when I played the game just to fill the gaps between what the game conveyed to me and what I wanted it to convey to me. Like with 8-bit characters. Today, that guy is beyond precise. I can’t have a single interpretation of how Aiden looks. It’s clear. He looks exactly like that. That wasn’t the case before.

What I miss is the equivalent of the 8-bit character today. One of the innovations is there, to me. We created a game where we could say, “You can monitor every single person in this city. They all have a name, a background.” It sounds crazy. It sounds impossible. But then you do it, and it becomes the beginning of something.

What will a game be 20 years from now, if in Watch Dogs I can relate to every individual around me? I see players and journalists turn around and tell me, “Hey, can I give back the money I just took from this guy? It turns out he’s having some problems.” That’s what innovation is.

A good meter for innovation, maybe, is when I see player behavior I’ve never seen before. Their reactions to the profiler are pretty strong, in how they behave with their surroundings. Seamless online multiplayer is another one. It took us forever just to help players realize that there were other players. No matter how easily you’d think players could recognize other human players, when in their mind they’re playing a single-player game, and someone shows up seamlessly, it was very funny to see what people would do. I remember a tester turning to me and saying, “Wow, the AI was really good there.”

In the end, though, I don’t think it’s any of those. I think the biggest innovation is the way all of this synchronizes together. It delivers a hyper-connected world. As you play the game and as events occur, you’re getting in even deeper. After playing several hours, you can appreciate how deep we went with connectivity.

GamesBeat: Somebody at Ubisoft was quoted as saying that you could play this for hundreds of hours. What do you really mean there? In the single-player campaign, or through so many levels?

Morin: The way the game is structured, I’d say that based on our observations of players, when you combine the time they spend on the free roaming and on the story, the average is 35 to 40 hours to finish the game. But I don’t remember the percentages as far as the combination.

I attempted to get 100 percent on the game recently. I had about one-fourth of the game down as far as the main story, and I was trying to optimize as far as the free-roaming, and I’d reached only 30.8 percent after 50 hours. So there’s a lot of content, but it’s not structured to force people to go that deep. If you feel like constantly revisiting the content and finding new things, there’s a lot going on.

GamesBeat: How would you say it compares to the scope of something like Grand Theft Auto V?