Mobile platforms are taking over the world, and nothing gets more downloads or makes more money on iOS and Android than video games.

Google’s and Apple’s software platforms have enabled developers of all sizes to get their products in front of customers around the world. This benefits the people making the games, but this is also incredibly important for the platforms and for the hardware that runs them. The truth is that games fuel a great portion of the excitement that people have for their touchscreen devices. On a worldwide basis, games make up 40 percent of all app-store downloads and about 75 percent of app-store spending. That got us wanting to check in on the performance of gaming on iOS and Android around the globe because it seems that as games go, so goes the market.

The longstanding wisdom among the people making games and analyzing how they perform on the markets tells us that while Google’s mobile operating system is growing in terms of market share, iOS still makes developers more money. Is that still true? Is it changing? Is the difference between iOS and Android different depending on the country? We’ve taken a look at the data, and while behavior in the U.S. and the U.K. is similar, it’s wildly different in China.

Before we get into the details, it’s important to know why it’s even worth looking at games and not, say, productivity apps. Games make up a huge portion of revenue on both Android and iOS in just about every market in the world. In Korea, for example, games make up 94 percent of Google Play’s revenue. On iOS in Korea, it’s 79 percent, and the next closest category is music at 4 percent.

While Android makes up 78 percent of the global smartphone market, it only accounts for half the consumer spending of iOS, according to industry-intelligence firm IDC. This is despite that iOS only has an 18 percent market share globally.

How can Android have such a large lead in terms of devices but still fall so far behind in money spent — well, a lot of that comes from where these smartphones are selling.

“Both iOS and Google Play are currently strongest in the U.S. as a single country,” App Annie vice president of communication Marcos Sanchez told GamesBeat. “But [the mobile app markets are] stronger in terms of revenue in Asia if you combine all of the territories in that region and compare them against the U.S.”

That’s especially true for Android, and it partially explains why it can have so many users and not make as much money. The average gamer in many Asia-Pacific regions typically has a comparatively limited income and is also less likely to have a credit card. That makes it difficult to convert them into paying customers in premium-priced games or in free-to-play software with in-app purchases. That pattern even extends into North America, where cheap Android phones have found market share with lower-income consumers who might not want — or have — credit for virtual goods. That’s compared to iOS, which is extremely popular with people who bought into the iTunes ecosystem as far back as the early 2000s. Those kinds of consumers already have their credit cards on file with Apple, which greatly reduces the friction that might prevent a consumer from spending. Yesterday, Apple revealed it has 800 million iTunes accounts with 400 million credit cards on file.

Android has started to close the revenue gap, and that’s due to a number of factors. But it still has a lot of ground to make up on iOS.

Now that we’ve laid down some basics, let’s take a look at Android and iOS in the world’s most-important regions.

The battle between iOS and Android in North America reflects the situation in the rest of the world. Hardware running Google’s operating system holds a bigger chunk of the market than Apple’s, but consumers spend a ton more on iOS.

The United States is not only the biggest spender on the continent, it is still the top nation in terms of mobile revenue in the entire world. That’s due to a combination of a high number of people with smartphones and tablets in addition to the amount of money the average player spends. 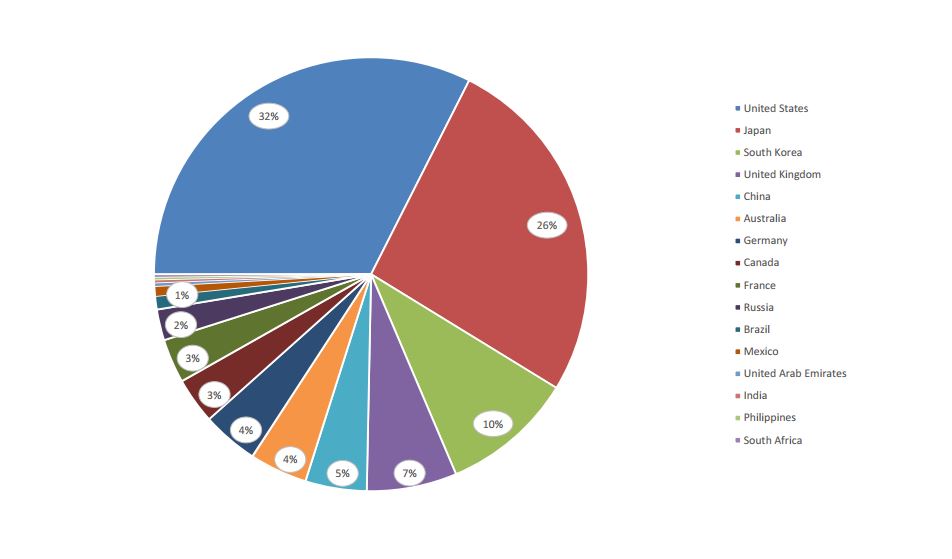 Above: The United States is still the best place to make money on mobile.

The current split has Android with more than 50 percent of the U.S. smartphone market, according to industry-research firm Kantar. Apple’s OS has nearly 44 percent. That’s actually a lot closer than in most countries.

Apple’s App Store makes more than Google Play in the U.S. by a 3-to-1 margin. It’s actually worse than that. The iPhone and iPad specific slices of the App Store, which App Annie tracks separately, both generate more spending than Google Play does as a whole.

No, the reason is likely that aforementioned credit card issue. Those longtime iTunes customers, many of whom have spent tons of cash on their music collections, are not likely to hesitate to drop a buck on a game every once in a while. We see that reflected in how the business models break down between the two platforms in the U.S. 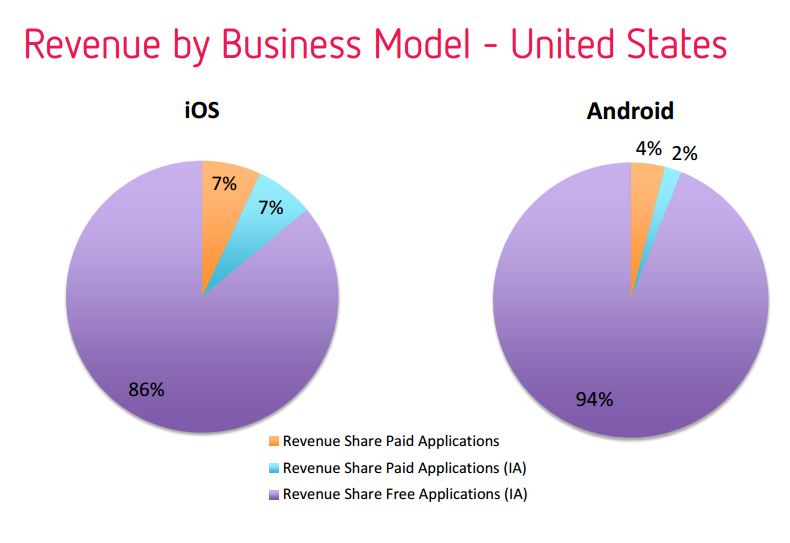 Above: The break down of business models on mobile in the U.S.

Both platforms make most of their gaming revenue from free-to-play games that sell in-app microtransactions. These are your Clash of Clans-style releases that don’t charge anything up front but spend months at the top of the highest-grossing list.

The difference is that iOS still makes 7 percent of its revenue from premium-priced apps (mostly games) and another 7 percent from paid apps that also include microtransactions. On Android, those numbers are only 4 percent and 2 percent, respectively.

That might not like seem like a huge gap, but it reveals that more people on iOS are willing to spend money on games upfront. This likely explains why casual-game developers, like FarmVille maker Zynga, no longer hesitate to release their free-to-play titles on both platforms simultaneously while more traditional, premium priced titles hit iOS long before an Android version does.

In recent weeks, developers have released games like R.B.I. Baseball 14, Hitman Go, and FTL: Faster Than Light on iOS but not Android.

Is Android catching up? Yes. Definitely. App Annie found that spending is growing faster on Google Play than it is on the App Store, but — for now — developers and gamers are all having a better experience with iOS than Android if only do to the spending and release disparity.

While the U.S. is the big market, Canada plays an interesting role in the territory. Publishers often test their games out in Canada as part of a limited soft launch. Most recently, World of Warcraft developer Blizzard launched its new collectible-card game Hearthstone in Canada (and Australia and New Zealand) a few weeks before unleashing it worldwide.

As for Mexico, it is one of the world’s rising stars. While U.S. is No. 1 for spending and Canada is No. 8, the southern-most part of the continent is No. 23. It is often called out as one of a handful of “growth markets” by industry observers.