The mysterious red dot is back. All the time.

That’s what your cat will think, but in reality you’ve probably just installed a Kittyo, a new gadget that enables cat owners to play with their cats remotely.

Through the Kittyo app for iOS and Android, you can use the device as a laser pointer, watching your cat go bonkers chasing it. You can also record video, speak to your pet, and dispense treats through the crowdfunded pet gizmo. 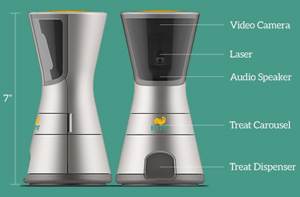 At 7 inches tall, Kittyo attaches to shelves and walls to ensure it’s impervious to your cat’s curious bats. The gadget looks a bit like a coffee machine — but it’s obviously way cooler, because it has a laser.

The eponymous pet-tech startup on Monday launched a Kickstarter campaign, which hit its $30,000 goal in an absurdly fast 36 minutes, according to the company. Five days later, the campaign total stands at $177,119 raised, nearly six times its original goal with four weeks of crowdfunding left.

“We’ve had an incredible week since we launched on Kickstarter just 5 days ago,” the Kittyo team wrote in a Kickstarter update Saturday. “With [over] 1,600 backers and more than $175,000 pledged already, we couldn’t have dreamed of a better launch. We hope we can maintain this incredible momentum for the next 27 days.”

The startup is offering Kittyos to campaign backer who plunk down at least $139 (though there are still some available a lower ‘early bird’ price). The company expects to ship Kittyo to backers in November. To learn more about Kittyo, check out the Kickstarter video below.