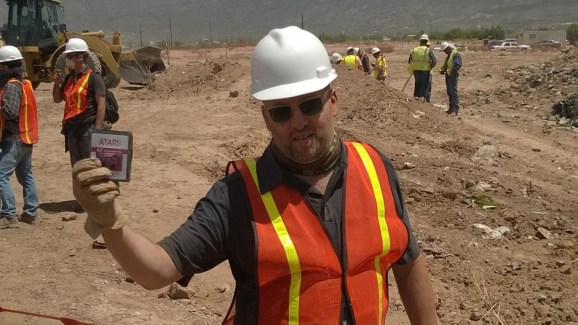 An excavation team dug up old Atari video game cartridges of the much-maligned E.T. the Extra-Terrestrial game at a landfill in Alamogordo, N.M.

After three decades of speculation, a crew went to the landfill and unearthed the old cartridges after doing a huge amount of research for the Xbox original documentary Atari: Game Over.

Legend had it that Atari Corp. buried the cartridges because E.T. was so horrible, and it couldn’t sell them. The disastrous business move led to one of the gaming industry’s worst recessions.

The crew dug for three hours and found the cartridges, in addition to other Atari titles buried there: Centipede, Space Invaders, and Asteroids.

The game debuted in 1982 on the Atari 2600 with a tie-in to the E.T. the Extra-Terrestrial movie. While the Steven Spielberg film was a hit, the game was rushed and bad, sending Atari into a financial tailspin.

Fuel Entertainment took an interest in the legend, and in Dec. 2013, with help from local garbage contractor Joe Lewandowski, acquired the exclusive rights to excavate the Alamogordo landfill. Fuel then brought the opportunity to Xbox Entertainment Studios, which commissioned a documentary to record the event.

The documentary’s executive producers are two-time Academy Award winning producer Simon Chinn (Searching for Sugar Man and Man on Wire) and Emmy winning producer Jonathan Chinn (FX’s 30 Days and PBS’s American High).
Writer/director Zak Penn (X-Men 2, The Avengers, and Incident at Loch Ness) is directing the film. It will air exclusively on Xbox One and Xbox 360 in 2014.