Check out our Reviews Vault for more recent reviews.

The difficult thing about making a golf game, I would imagine, is determining how much of the math to expose to the player. The real sport hides everything from those who attempt it. Brave and patient athletes must rely solely on experience and instinct. In Mario Golf: World Tour, Nintendo and developer Camelot have gone to the opposite extreme — and it makes for an enjoyably cerebral take on the idea of swinging a club at a tiny ball to get it into a hole that is hundreds of yards away.

The latest entry in the arcade-style golfer starring Nintendo’s Mario universe hits the 3DS on May 2 for $40. It brings a number of courses, all flourishing with familiar Mushroom Kingdom decorum as well as a the expected roster of golfers. Only you will actually take control of your own Mii for most of it, which will have you competing in various tournaments and online multiplayer modes.

As a whole, it is a content-packed experience with occasionally brilliant presentation, but a paltry campaign and a few other quirks hurt World Tour’s handicap.

Strong mechanics that turn every shot into a puzzle

At this point, you probably know how a golf game controls. In World Tour, as in any number of takes on the sport, you start a swing by tapping “A.” The meter then fills up and you have to time your two subsequent presses to determine the power and accuracy of the shot.

That still works, and the developer has brought about all of the information you’ll need to make the best shot possible. Is the ball in the rough? Well, that’s plus or minus-5 percent off the accuracy and power of your shot. If you fill up the meter three-quarters of the way — well, a dotted line will show you where the ball will impact the ground and an arrow will show you how far it will likely roll after that. 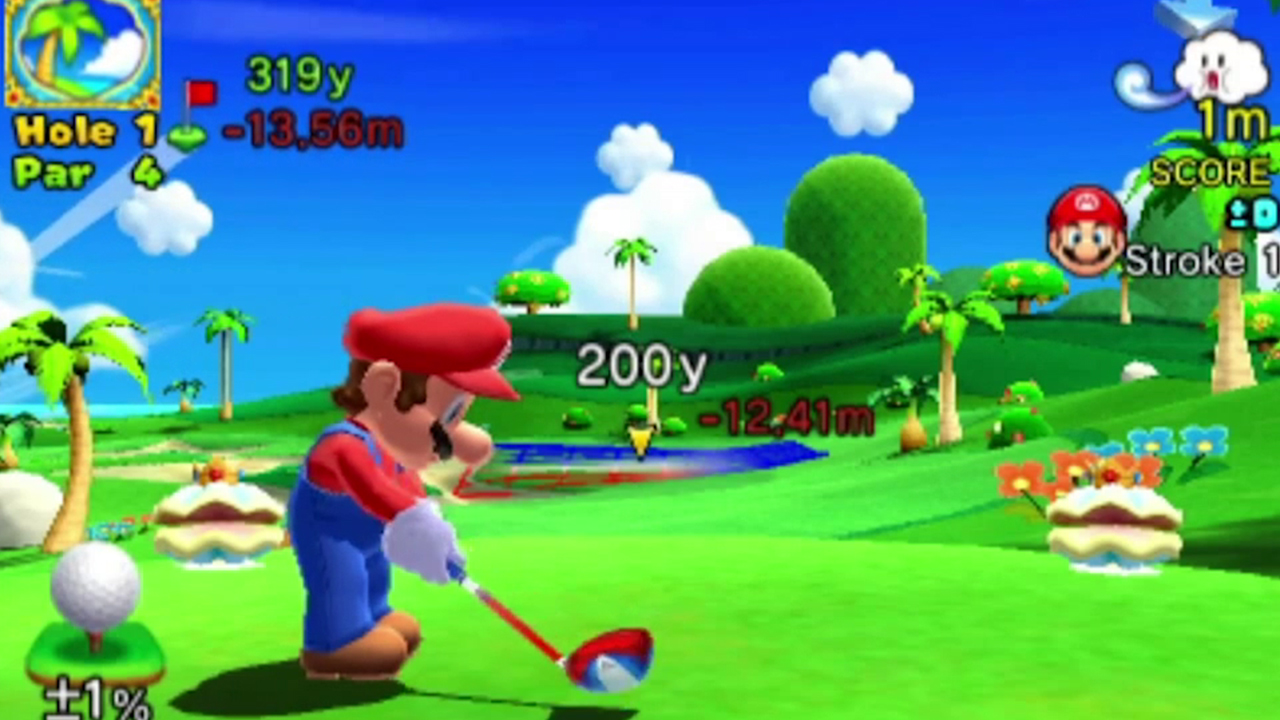 Above: Every swing requires you to take into account a number of factors.

World Tour shows you all of that, and it enabled me to perform some extraordinary shots just as I intended. At first, it felt like too much information, but the courses are difficult enough, and the putting is just unforgiving enough, to keep the challenge high. And to get the best score, and win a course championship, you’ll need to use all of the data given to you to perform the best shot every time.

That turns this into a really satisfying physics puzzler where, unlike real golf, it’s OK if you are overthinking every shot.

Mario Golf looks really nice, and it has an especially attractive presentation. Transitions between the shots are well animated, and the word “Birdie!” pops off the screen in an enticing manner when you nail a hole.

But for all the flair between shots, nothing every feels overwrought. If it does, a tap of the A button usually skips past instantly. I never felt like I was waiting too long to get back into the action, and an 18-hole course can fly by in a very reasonable amount of time. 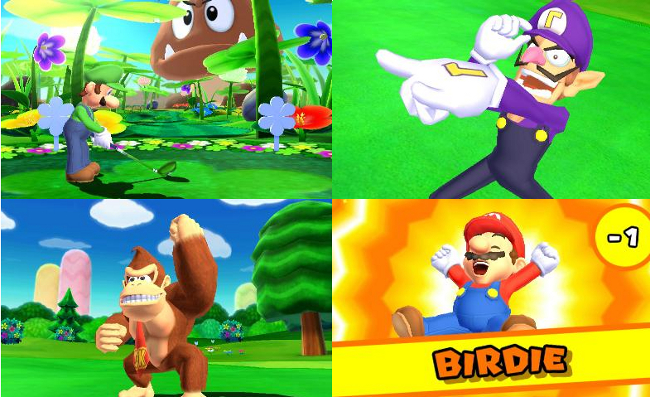 Above: As you might expect, World Tour is colorful and bright, but it also doesn’t waste your time if you’re in a hurry.

Unfortunately, World Tour does not feature a role-playing-game-style story and campaign. This will likely bum out longtime fans because Mario Golf for Game Boy Color and Mario Golf: Advance Tour both featured RPG stories that required gamers to conquer the golf world.

Instead, you’ll burn through a three-course Club Championship mode in just a few hours that requires players to do nothing more than to get first place in those three tournaments. Camelot spices things up by giving you plenty of peripheral and funny characters to talk to around the clubhouse (which is fully explorable), but it is not nearly as satisfying as what I remember from playing Mario Golf: Advance Tour on GBA back in 2004.

Admittedly, this particular complaint is a product of personal expectations. If you are coming to World Tour only experiencing other golfing sims or the home console versions of Mario Golf, this shouldn’t hurt your experience.

You can still improve your character by purchasing new clubs, clothing, and equipment using your winnings, and while that is an insufficient substitute for what Camelot has done in this franchise previously. It is still a pretty good way to go through the early part of the game before you get to explore the rest of the courses under your own terms.

The clubhouse structure also doesn’t quite make as much sense without the RPG elements. It actually only served to frustrate me as buildings and rooms aren’t well labeled, so you might spend a few minutes searching for the equipment shop.

This is another rather minor issue because I loved stumbling across Wario stuffing his face with hamburgers in a buffet line. The world has a number of these magical moments, and while I didn’t like getting lost, I did learn where everything was eventually.

I have issues with Mario Golf: World Tour, but they are completely unimportant when I’m playing the actual golfing parts. It feels great, it looks very nice, and it plays at a fast pace. And while the campaign packaging is a faint echo of Mario Golfs gone by, that didn’t stop me from loving the 20 hours I spent with this entry in the franchise.