The world of Nosgoth is back after an 11-year hiatus. But just as freshly turned vampires look different from their human selves, this new version may seem a little unrecognizable.

Legacy of Kain was a series of single-player action games that took place in Nosgoth, and it captured fans’ imaginations with interweaving storylines about vampires and other supernatural beings. But the franchise went quiet after the last game, Legacy of Kain: Defiance, came out in 2003. More than a decade later, publisher Square Enix is bringing the mythology back with the simply named Nosgoth, an upcoming free-to-play multiplayer game for PC that pits vampires and humans against each other.

From our recent time with the closed beta, we found out that you don’t need to know anything about the series’ complex backstory to jump in. But part of what makes Nosgoth fun is its look and atmosphere, and knowing the history behind these enhances the experience. So with the help of GamesBeat’s own Legacy of Kain expert, Evan Killham, we figured out just how Nosgoth ties back to the old games. If you want to learn more about this human-vampire conflict or if you’re a diehard fan wondering how developer Psyonix’s game fits within the lore, start here.

A brief history of Kain and Raziel

Kain and Raziel are the central figures of the Legacy of Kain games, and while neither of them appears in Nosgoth, their presence still lingers. Kain rose to power through his violent, time-bending conquest during Blood Omen: Legacy of Kain (which came out in 1996) and Blood Omen 2 (2002). He created Raziel and five other vampires to serve as lieutenants in his army. Over time, the vampires underwent a period of evolution and developed new physical features. It would happen to Kain first and then later to his lieutenants.

One day, Raziel revealed to Kain that he had grown wings — the first of the vampires to do so. Kain saw this as an act of betrayal and cast Raziel into the Lake of the Dead (as seen in the video below).

Psyonix’s Nosgoth takes place centuries after Raziel’s death but still some years before his resurrection (which kicked off the Soul Reaver games). It’s here when Kain leaves his throne to attend to other matters, and his absence ends up creating a power vacuum among his surviving lieutenants. A civil war between the vampires erupt, and the humans, who became slaves under Kain’s reign, use this as an opportunity to escape and regroup until they are able to fight again. Eventually, the vampires realize who their real enemy is, ending their war so they can squash the human rebellion. 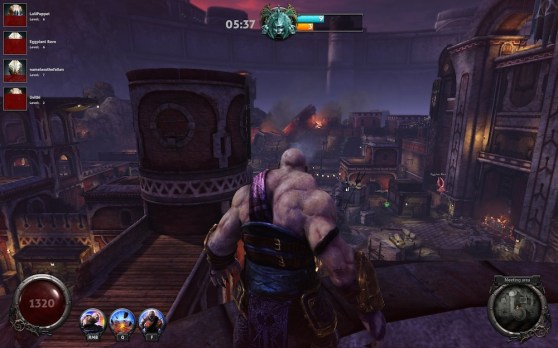 Above: Tyrants are the Hulks of the Legacy of Kain universe.

Each of Kain’s lieutenants created their own clans, legions of young vampires who share some of their master’s abilities. In Nosgoth, these clans make up the different vampire classes you can play. The Sentinels represent the first glimpse of Raziel’s clan, the Razielm. These monstrous creatures are the only ones who can fly, and they can swoop into battle to kidnap humans and drop them from terrifying heights. The stealthy Reavers come from clan Dumahim, and they excel at stalking their prey and keeping them busy with a deadly pounce attack. Their leader, Dumah, was a boss in the first Soul Reaver.

The physically imposing Tyrants from Turelim (led by Turel) can stun humans with their earth-shaking attacks. Turel is in the opening cutscene of Soul Reaver and doesn’t appear again until Defiance, when he’s a huge monster worshipped as a god. The Deceivers are members of the Zephonim, and their master, Zephon, shows up in Soul Reaver as a giant spider-like creature. They’re not as strong as the other vampires, but they can turn invisible and disguise themselves as one of the humans.

Regardless of their clans, the vampire classes share one crucial ability: They can climb over buildings. Not only does the added height advantage give you a better view of the map, and thus of your human prey, but you can use the rooftops as temporary hiding places if you need to retreat. The only way they can fully heal themselves is by feeding on the corpses of their enemies. 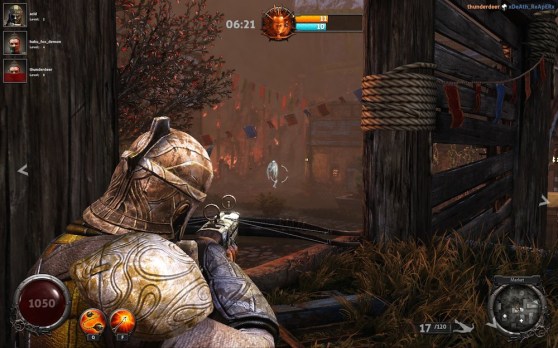 Above: A Hunter aims at a Sentinel.

Previously, the only group of humans seen in the series were the Sarafan, a brotherhood of vampire hunters that pop up in the Blood Omen and Soul Reaver games. Nosgoth introduces a few new groups with its human classes, and they all rely on ranged attacks to keep vampires from getting too close. The Ironguard’s Hunters are good all-around warriors, and their automatic crossbows can deal a lot of damage in a short amount of time. While they weren’t in the old games, they look very similar to the hunters found in the Human Citadel from the first Soul Reaver.

The female-only Alchemists (from the Red Sisters of Anacrothe) carry powerful hand cannons and abilities that support your team, like a light grenade that blinds any vampire within its blast radius. The Scouts are part of the Watchers, assassins who use their longbows to kill vampires from a distance. A fourth class, the mystical Prophet from the Lost Seers of Avernus, isn’t available yet, but it has twin revolvers that fire bullets dipped in “tainted blood.”

Humans can heal and grab ammo at various altars scattered across the maps. Individually, they aren’t as tough as the vampires, so the only way they can win is by sticking together as much as possible. Vampires can easily kill you if you’re alone. 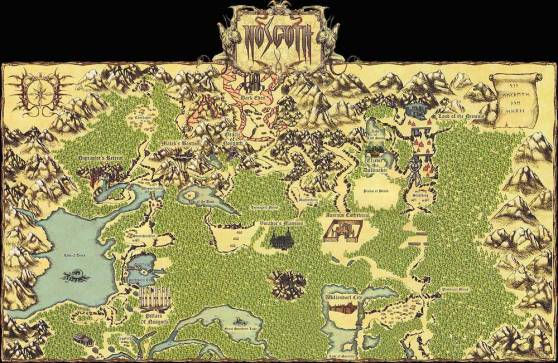 Above: A map of Nosgoth from Blood Omen: Legacy of Kain.

Each of the four multiplayer maps in the closed beta represent a real place from the old games. Provance is a human city in the southern region of Nosgoth, one of the many that fell to Kain and his army (the town first appeared in Blood Omen 2). Surrounded by mountains, its small but numerous buildings are ideal for archers and stalking vampires alike. Just west of Provance is Freeport, a major training center for the rebellion’s soldiers. Though somewhat dilapidated, Freeport provides a lot of indoor cover from any Sentinels hovering in the air.

Making its first appearance is Sommerdamm, a fort that protects the human capital of Meridian. Filled with tall towers and large gates, it can sometimes feel like you’re running through a maze when you duck behind alleyways or storm through refugees’ homes. Last is Valeholm, a city north of the Great Southern Lake marked by its burning ruins and a large pillar that stands in the center. The city was originally going to appear in Blood Omen 2, but developer Crystal Dynamics decided to cut it. 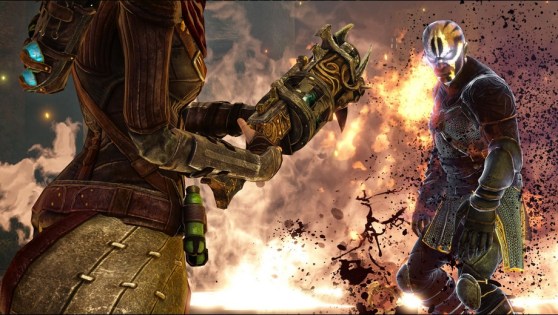 Above: Nosgoth runs on Unreal Engine 3.

Nosgoth is adding its own rich and complicated lore to Legacy of Kain’s already impressive backstory. It doesn’t answer all of our questions — why did Kain leave and where did he go? — but we’re just fine with tearing out our opponents’ throats to pass the time.