The hottest new frontier for developers is mobile, but most the of the 30-plus vendors in the marketing automation space are missing the boat by totally ignoring it, according to one CEO.

That would be Hugh Reynolds, the CEO of Swrve, which monitors 75 billion monthly user actions on mobile by 500 million people, looking for things that will make mobile developers more money.

“We’re the contrarian as you look at Hubspot, Marketo, and so forth, who have a web- and email- centric worldview,” Reynolds told me recently. “There’s so much movement into mobile that there’s a vacuum that the legacy players aren’t filling well.” 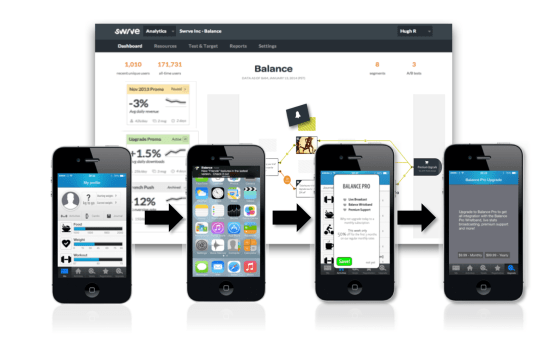 Above: Swrve helps you see what users are doing in your apps

Swrve is an interesting player in the complex mobile monetization space.

It’s not an ad network, it’s not simply an analytics solution, it’s not just a user engagement engine, and it’s not a user acquisition play. Rather, it combines elements of several of those to allow you to track what users are doing, target users based on their behavior, monetize via automated multivariate testing of multiple options, and personalize users’ experiences of your apps.

All in real time, all with the benefit of machine learning, and with pretty much any kind of app.

Mobile monetization is notoriously tough, and Reynolds doesn’t have a lot of faith in the common model of shotgun-style user acquisition — as cheap as you can — followed by shoveling a lot of ads their way.

“The other option is, once I’ve acquired these users: How do I enchant them, keep them, satisfy them?” he says.

It’s no magic bullet, Reynolds says, and it’s not even new. In fact, it’s exactly what we’re used to in the old-school meatspace:

“If you were running a bookstore, you’d see people who typically go to Westerns or to Romance novels,” Reynolds says. “You don’t know who they are, exactly, but you know what they like.”

That knowledge would let you personalize your customers’ experience, he says, and therefore optimize your chance to make a sale. In the bookstore, that might be telling a familiar face that a long-lost Louis L’Amour has been discovered and published, and you just happen to have a copy. In an app, that might be telling a war gamer whose city walls have just been demolished that there’s an amulet that will protect them next time.

This sort of thing can’t be done in batches or on timetables, Reynolds says: It has to be applied one by one, in real time, as needed.

“User experiences are critical, and when users abandon, they abandon fast,” he told me. “You can’t do that in a batch process, you have to do it live.” 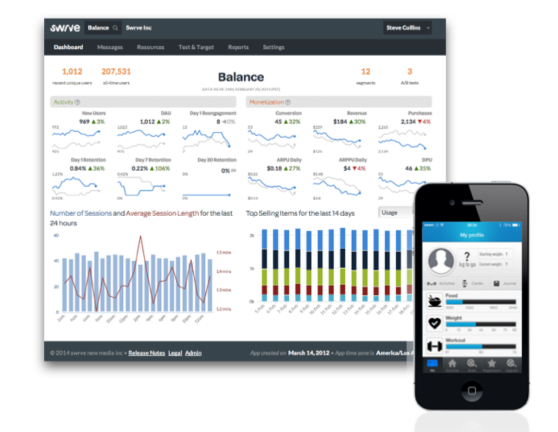 Above: More analytics from Swrve

In other words, analytics that tell you what’s happened after it’s happened might be helpful because they can help you avoid macro-level mistakes in the future, but they’ll never save that user who is in danger of abandoning your app because she just can’t seem to get what she wants.

This is a quintessential big data problem.

User models need to be complex, Swrve says, to match up to real people, who are also complex. So it’s not just big spenders or frequent users, but 20 different variables of who a user is, whether he or she has reviewed your app, if you haven’t seen him for six months, and much more.

But Reynolds says this is big data that just works, staying out your way and doing its thing automagically. 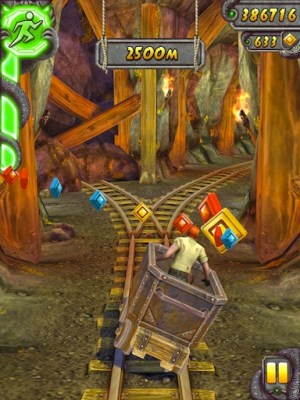 Above: Guy Dangerous wonders what’s off to the left. More coins, probably.

“We allow the big data to be the thing that automatically tests whether the nudge or influence that you try to exert is actually working,” he says. “You can automatically shut it down and try a new tactic … this keeps the big data out of the way and allows the machine to do all the bookkeeping.”

Swrve competitors include Urban Airship, Flurry, Splunk, and Localytics, as well as home-grown solutions that the bigger game companies build to try to accomplish similar things.

Reynolds thinks it’s just what the Marketos and Hubspots do, updated for mobile.