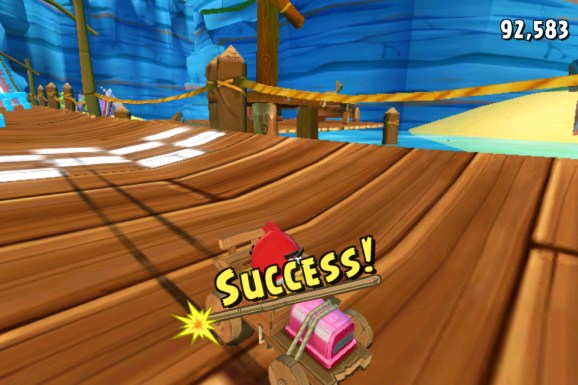 Angry Birds developer Rovio is falling back to Earth after its slingshot success.

The Finnish studio reported its financial earnings for 2013, and the company’s profits were more than halved year-over-year. Rovio generated $50.6 million in profit in 2013 on revenues of $216.2 million. While revenue was steady from $211 million in 2012, profits were down from $106.45 million. It introduced and failed to find success with a new free-to-play game featuring microtransactions. That is something it’ll need to get right if it hopes to take a bigger piece of the $16 billion mobile gaming industry from the companies making Candy Crush Saga (King) and Clash of Clans (Supercell).

This stagnation has Rovio calling its 2013 a “foundation-building year.” This comes as other mobile companies, like King and Supercell, are generating revenues near and beyond the $1 billion mark.

“We invested in new business areas, such as animation and video distribution, ventured into new business models in games, and consolidated our strong market position in consumer products licensing,” Rovio chief financial officer Herkko Soininen said in a statement. “With these investments, we have been gearing up for the future growing markets.”

One of Rovio’s big investments in 2013 was Angry Birds Go, the developer’s free-to-play kart racer featuring its band of mascot fowls. The studio intended this release as its first big move into a business model based on in-app microtransactions, which is different from the ad-based and premium pricing structure it used in the past. The experiment does not look like it paid off. Angry Birds Go is No. 234 on the most-downloaded chart in the U.S. and No. 361 in Japan. In those same markets, it is No. 169 and No. 557, respectively, in terms of revenue.

That is miles behind the competition, but Rovio isn’t just looking to games.

“In 2013, we formed a world-class movie animation production team in Los Angeles that is already working on the first Angry Birds feature film, to be globally premiered in July 2016,” Rovio chief executive Mikael Hed said. “In addition, we built the biggest animation studio in the Nordics for the production of animated TV content, bringing to market 42 Angry Birds Toons episodes in its first year.”

The company also launched its ToonsTV service, which has more than 2 billion views already.

“Future business will, for the most part, depend on how well last year’s investments perform and how our new properties delight our audiences,” said Soininen. “We are actively investing in the company to increase our capabilities for the future, and this year will see exciting new content and services coming from all our business areas.”

As a whole, consumers have downloaded Angry Birds games more than 2 billion times, and Rovio is still confident it can capitalize on that.

“We’re creating long-lasting business, and strongly believe our entertainment strategy will consolidate Rovio’s position as one of the world’s most beloved brands,” said Hed.