If you look at the to revenue makers for Apple iOS games in March, the story is much the same, according to monthly results from market researcher App Annie.

Supercell is No. 1 in monthly game revenue, followed by King and GungHo Online. The top five games are the same, unchanged from February, in terms of revenue generated on iOS.

But if you look at other numbers, you’ll see the fluid and dynamic nature of mobile gaming is still very much alive. On iOS, Smash Hit from Sweden’s Mediocre scored the No. 1 spot in terms of top monthly downloads for games. That is a great debut for a new title, but this video shows why the glass-smashing title is a lot of fun. Smash Hit provides more evidence that indie hits that come out of nowhere are still possible on the democratic mobile game platforms. Smash Hit also did well on Google Play in March.

King’s Farm Heroes Saga was No. 2, as the newly public company tries to prove that it is no one-hit wonder with Candy Crush Saga. The clone game Flappy Wings from Germany’s Green Chili took No. 3, while Glu’s Frontline Commando 2 was No. 4, and Ketchapp Studio’s clone game 2048 was No. 5. 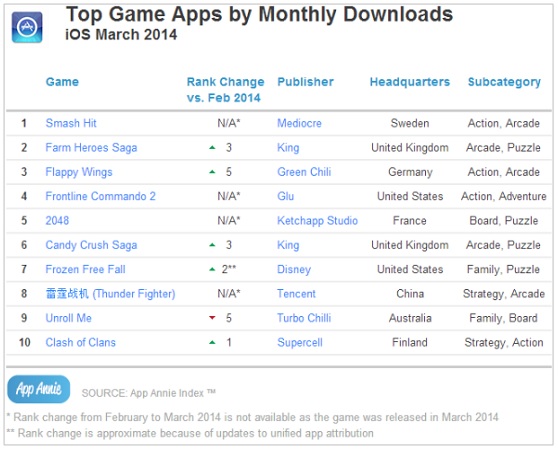 Above: Top game downloads on iOS in March

The top downloads list is where all of the dynamic movement is on both iOS and Google Play. On Google Play, one of the notable top-downloaded games was Subway Surfers from Denmark’s Kiloo. That game has been downloaded more than 400 million times to date.

Tencent has also become a huge player on the iOS App Store, hitting No. 1 among game publishers in monthly iOS downloads. In doing so, it passed up Electronic Arts and Gameloft, two of the oldest mobile gaming companies. Tencent’s growth in March came from new releases like Thunder Fighter, which was No. 8 in downloads on iOS. But it also had three titles on the top ten iOS games in monthly revenue.

Japanese publisher Gumi also had a good month with the role-playing game Brave Frontier, which hit the top ten games on Google Play in terms of monthly revenue. As such, App Annie said that it was one of the few titles that has been a hit in both Eastern and Western markets at the same time. 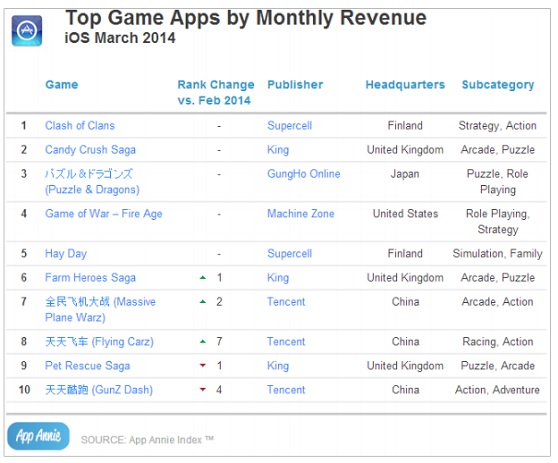 Above: Top iOS games in revenue in March 2014

Of course, the revenues from these new games are small in comparison to the numbers generated by the mobile-game money makers. Supercell, which has three games on the app store — Clash of Clans, Hay Day, and Boom Beach — was No. 1 in revenue, unchanged from its No. 1 position in February. Supercell’s long-awaited release of Boom Beach in March helped it solidify its hold on the iOS top rankings, and it has had a strong start on most markets worldwide.

King was No. 2 with 16 games, and GungHo Online was No. 3 with 51 games. In fact, the top seven leaders on the monthly game revenue list on iOS were unchanged.

Kabam saw gains in March in terms of monthly revenue on iOS, moving from No. 10 to No. 8. On Google Play, Korea’s Gamevil joined the top ten game publishers in March, driven by the fantasy adventure game Dragon Blaze for Kakao, the fast-growing Korean mobile messaging network.

In the first quarter, Russia and Brazil moved into the top three countries in terms of quarter Google Play downloads. My Talking Tom from Outfit 7 saw success in those two markets. China is also driving a lot of revenue growth in the iOS App Store, and China’s Tencent is leading this growth. Games on Tencent’s WeChat mobile messaging service are gathering steam in China. In March, three titles on WeChat appeared in the top ten iOS games in monthly revenue. 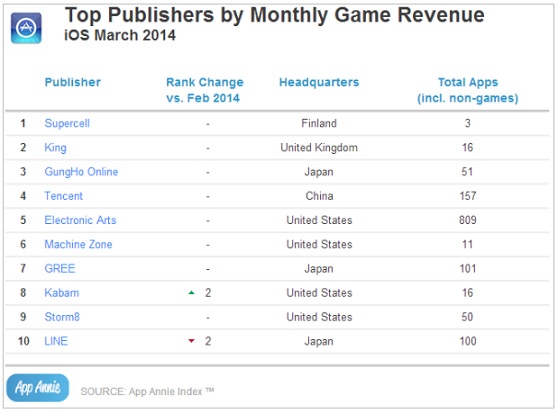 Above: Top iOS publishers in revenue in March 2014