Andi Lucas was at Newark Airport in October 2013, patting herself on the back after a taxing two-week-long sales trip, when her phone started blowing up with text messages.

“People were telling me ‘Congratulations, this is awesome. All of your hard work has finally paid off. You finally signed a licensing deal,’” the co-founder of Dinkum Systems recalled. “And I was thinking: What? No we haven’t.”

And that’s when she found out that GoPro had released the Jaws Flex Clamp, a flexible, ball-jointed camera mount. The GoPro mount was a product that worked and looked eerily like the one that her co-founder John Mans at Dinkum Systems had already patented and released, dubbed the ActionPod.

The resemblance was so striking that all of her industry peers thought Dinkum had signed a licensing deal.

“We were pretty devastated, to be honest,” Lucas told VentureBeat.

But a couple months later, the pair are bracing themselves for a David-versus-Goliath of patent suit. This week, the small Denver startup announced that it is taking GoPro to task for allegedly stealing their product idea. Their complaint is available on Scribd.

Dinkum Systems, a camera-accessory-making startup based in Boulder, Colo., is home to the ActionPod, a flexible, clamp-able camera mount. The ActionPod was the brainchild of John Mans, a professional photographer and videographer who has been working on camera products for 15 years, according to Lucas.

Dinkum’s relationship with GoPro started innocuously enough in 2012. The two entered into a co-promotional partnership in spring that year, after Lucas connected with some GoPro reps by chance at a film festival. GoPro invited Dinkum to show off its wares in GoPro booths at trade shows. Here’s a Dinkum rep showing off the ActionPod at one of these co-promotion events:

According to the Denver Post, GoPro also bought ActionPods at a steep discount for promotional shoots.

The lawsuit alleges that GoPro’s Jaws mount not only mimicked the functionality but also the “look and feel” of the ball-jointed ActionPod mount. And indeed, there is a striking similarity between the Jaws Clamp and the ActionPod:

This, after GoPro execs told Dinkum co-founder Andi Lucas that they would not make their own version of the product, according to the Denver Post.

When Mans and Lucas found out that GoPro had released a clone of their product right after the Jaws mount was released. 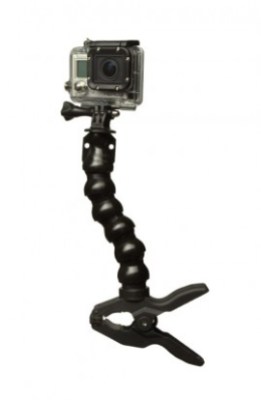 The two filed a cease and desist letter, but got no response from GoPro. Their next step was to file a patent lawsuit in December 2013.

Mans said in a statement on Tuesday that he is disappointed to have to take legal action and is hoping for a speedy resolution to the case.

University of Richmond Intellectual law professor Christopher Cotropia said that the Dinkum lawsuit is an illustration of the patent system at it’s best.

“The patent gives someone like Dinkum the ability to exclude competitors from using the patent features, and, in turn compete, because of the exclusive patented product feature, even though the patent holder may be small or a newer entrant to the market,” he said.  “The patent levels the playing field, in a sense, between the smaller company and larger incumbent.”

“It seems like the plaintiff is alleging that GoPro was a partner and took some ideas,” Wagner said. “But there is no patent claim in that case.”

It could take anywhere from 8 months to a year before the case is heard in Colorado District Court, according to Lucas.

VentureBeat has reached out to GoPro for comment and will update when we hear back.