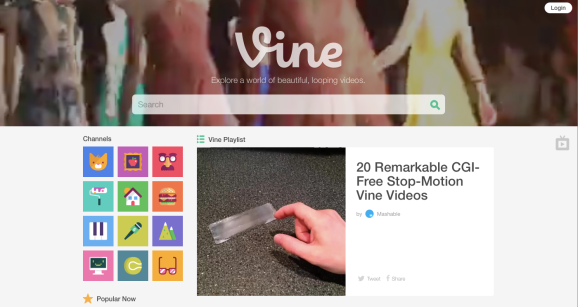 Twitter-owned Vine has just given its website a revamp, and the results are reminiscent of a video site that starts with “You” and ends with “Tube.”

The new Vine features users’ videos, playlists, and a big fat search bar to help you find whatever vineries you’d like to see. Vine started out as a mobile app that folks use to capture 6-second looping videos.

The new layout takes vines out of private vaults and puts them on the site for the world to see, much as YouTube does for its videos. It showcases “Popular Now” vines, trending hashtags, user-created playlists, category channels, and handpicked content.

“Up until now, the primary way to watch, share, and discover Vine videos has been on your phone,” the company writes in a blog post today. “We’ve heard from the Vine community that you sometimes want to explore Vine and view videos on your computer, too.”

You can watch each feed in TV Mode, which pulls up a near-full-screen display of videos that play one after another — much as one sits in front of a television and watches continuous video.

And people no longer need to be logged into their Vine account to view and explore vines; the new website is public. Vine profiles originally came to the desktop back in January, and today’s update is a huge next step in expanding the desktop Vine experience.

Vine and Instagram have been in a heated competition ever since the latter launched 15-second video support in June. The two apps have been going back and forth, matching each other’s features in a effort to stay in social short-video running.

Vine’s redesign could also be an effort toward monetization. Instagram opened its product to advertising when it signed its first deal with an agency, Omnicon, last month. Instagram’s video support likely played a big part in this, as video still commands the highest engagement and monetization. Vine’s new layout could be a move toward monetizing if vines start to pick up additional views, now that they’re more easily discovered, found, and watched.