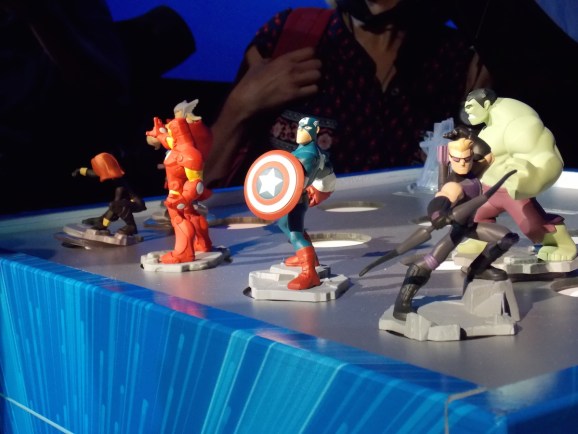 An up-close look of the Avengers toys for Disney Infinity 2.0.

Disney doesn’t mess around when it comes to its superheroes.

The company brought some major star power to its recent Disney Infinity press event, where it revealed the “2.0 edition” of its toy-based video game series with Disney Infinity: Marvel Super Heroes. Actors Samuel L. Jackson and Clark Gregg helped out on stage by reprising their popular roles — Nick Fury and Agent Coulson, respectively — from Marvel’s superhero films and the Agents of S.H.I.E.L.D TV show. The executives and producers that followed them gave an hour-long presentation that featured flashy trailers and videos about the new game.

After the event, I spoke with John Blackburn, vice president and general manager of Disney Infinity developer Avalanche Software, and Peter Phillips, executive vice president and general manager of Marvel’s Interactive and Digital Distribution division. While the two men didn’t reveal anything substantially different from the presentation, they gave some fun insight into what it means to bring these Marvel icons to the Infinity universe. Here are the highlights.

Why Avalanche waited until ‘2.0’ to bring in Marvel heroes

When Avalanche started working on the first Disney Infinity game, it had to make sure that the creative stakeholders in the company (like the animation studio Pixar) were comfortable with including their characters in a game where players could mix and match their toys with other films and cartoons. That process was a little trickier with Marvel. Blackburn and Phillips don’t remember exactly when the two companies started talking, but it was at least a few years ago.

“On the first Infinity, it was definitely, ‘Let’s focus on Disney because it’s an understandable brand,’” said Blackburn. “When we started talking about Disney and Marvel together, there’re bigger issues there as far as like, ‘Hey, how does Marvel work with Disney?’ We needed some time to work those things out, so we started the conversations a long time ago.”

Since it took this long to include Marvel’s characters, this might mean that Avalanche is already in the process of working with Lucasfilm about including Star Wars (Disney’s other huge property) as well. The first film of the new trilogy, tentatively called Star Wars: Episode VII, has a December 18, 2015 release date. The timing would work out perfectly if Avalanche is planning on releasing another Disney Infinity sequel next year.

I asked Blackburn about this, but he immediately pulled his best Jedi mind trick on me when he said, “We’re not gonna discuss that right now.” 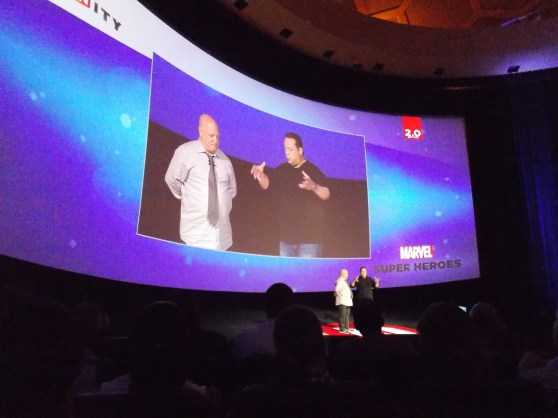 Comic book writer Brian Michael Bendis is another star under Marvel’s team, and Disney enlisted him to create stories for the new characters. Bendis has his fingerprints all over Marvel comics, including books such as Ultimate Spider-Man and Guardians of the Galaxy. You’ll see his first story in The Avengers Play Set that comes with the Disney Infinity: Marvel Super Heroes starter pack, and it takes place in Marvel’s version of New York City.

“What’s important in introducing Marvel characters to this game is that they’re true to who the characters are,” said Phillips. “You need somebody who understands Hawkeye, Black Widow, Captain America, etc. Who understands our brand, who understands what they would do in terms of combat, in terms of locomotion, in terms of the types of stories that we would tell in a game. You can’t just have anyone do that. And Brian Michael Bendis was the first choice here.”

But Bendis isn’t the sole keeper of Marvel lore and authenticity. A lot of people from both companies are overseeing the transition.

“There are a lot of collaborative elements,” said Blackburn. “You can go from the design of the physical look of the characters and what the art style was going to be there — so we worked with a lot of artists on that. Then there’s the people that are like, ‘What are the poses going to be for the actual figures?’ And then, ‘What should the special effects look like?’ on top of these things. There’re a bunch of different people that collaborate.”

They have no idea which character is coming next

Aside from the superheroes and villains shown in the trailer [above], Avalanche and Marvel aren’t sure which figurines will come out in the future. Even just getting the Avengers out as the first set of characters took some debate.

“This is one of my favorite things,” said Blackburn. “It’s kind of like this bullpen conversation where you have all these guys that make video games and who love comic books, too, and who are like, ‘Let’s do this character because he’s my favorite!’ We get together with a lot of guys on Peter’s team. We talk about what gameplay mechanics we can support well, and then we start marrying those with which characters we like, which ones fit the story, which ones are more popular. All that kind of stuff comes in together, and we work it out as a team.”

I asked if they have any sort of master list of who’s going to show up next, but that’s definitely not the case. They still have to go through plenty of arguments before they get to that point.

“Imagine if you get together with your four best friends and say, ‘Hey, what should it be?’ You’re gonna have a ton of opinions in that group, right?” Blackburn said, laughing. 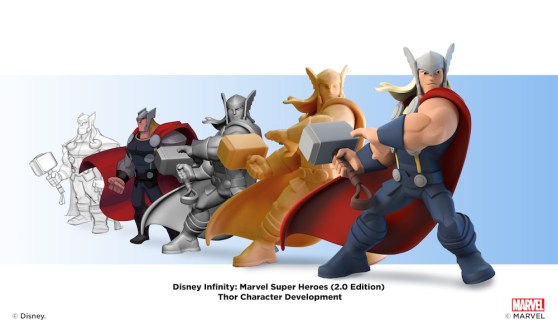 Above: The evolution of Disney Infinity’s Thor.

The Marvel heroes have a bit more depth to them than the older 1.0 characters when it comes to combat. Each of them has a skill tree where you can increase their stats, the power of their attacks, and the effectiveness of new abilities like the super jump. Since they can do way more things, Disney had to tweak the look of the Marvel characters to reflect this.

“Right off the bat, we stood these up in a line against the previous characters,” said Blackburn. “And they stand very well. They look like they still, stylistically, come from the same toy line. And that was very important to us. The thing is, in working with Marvel on this, these guys have slightly different body proportions than some of the other characters we did to make them look more super heroic. … So we needed these guys to look a certain way to be able to move a certain way as well.” 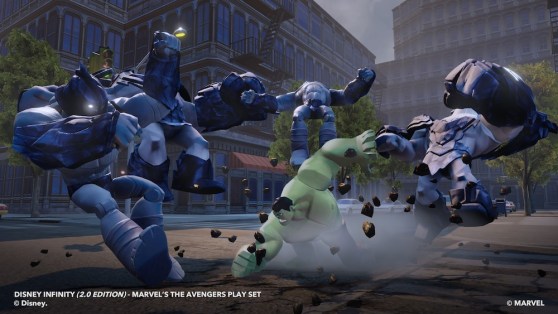 Above: Hulk does what he does best: smash.

Hulk is the biggest character in the game … for now

Marvel’s green giant holds two Disney Infinity records: One for his Rage Mode attack, which is the most powerful in the game, and the other for his physical size, since he’s now the biggest character on the roster. It’s hard to see the latter from the trailer or from the toys — I mentioned Sully from Monsters University as a comparison, since it was the biggest Disney Infinity toy I could think of at the time — but Blackburn confirmed it.

“We definitely have an overarching scale that we go through,” he said. “So the Hulk is the biggest character in the game right now. But we do play with scale a little because obviously Buzz Lightyear is supposed to be a small toy [in the Toy Story films] compared to Sully, who’s seven feet tall. We had to unify that stuff.”

Personally, I want to see a Galactus figure. If Disney wants to top the Hulk, why not go all the way with Marvel’s cosmic planet-eater?