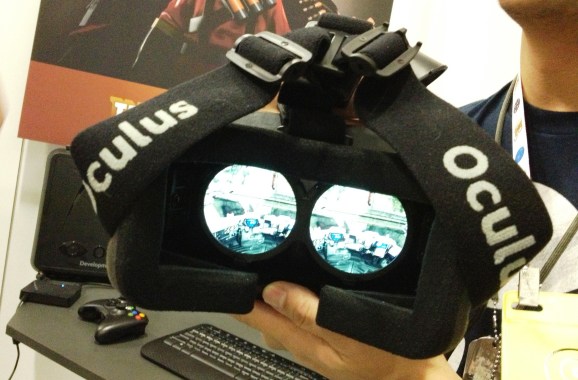 Taking a peek inside the virtual world of the Oculus Rift.

Zenimax once employed one of the key people working on virtual reality at Oculus Rift, and it thinks that it owns some of his ideas — and that engineer disagrees.

Yesterday, GamesBeat reported that Doom publisher Zenimax Media sent a request for compensation to virtual-reality hardware company Oculus VR. Zenimax claims that Doom co-creator John Carmack illegally took technology with him to Oculus when he left id Software, a subsidiary of Zenimax. Well, the engineer, who is Oculus’s chief technology officer, took to Twitter last night to defend himself and his new company.

“Oculus uses zero lines of code that I wrote while under contract to Zenimax,” Carmack wrote in a tweet.

On top of that, Carmack also claims that neither he nor Zenimax patented any of his concepts.

No work I have ever done has been patented. Zenimax owns the code that I wrote, but they don't own VR.

The Oculus Rift headset enables those wearing it to look around a virtual environment. The hardware requires several different technologies to work in concert, which is something that Carmack is directly overseeing. He even helped with that while he was still an employee of id. But if what he says is true — that the Rift is devoid of code he wrote while at Zenimax and the publisher doesn’t own any patents related to the technology — it’s difficult to see Oculus giving in.

In March, Facebook purchased Oculus VR for $2 billion. The social network’s founder Mark Zuckerberg said that it was worth that much not just because of the impressive Rift head-mounted display but also because of the all-star team, which includes Carmack.

The timing of this led Oculus VR to put out a statement that suggests Zenimax is simply asking for money now the virtual-reality startup has a loaded financial backer in Facebook.

“It’s unfortunate, but when there’s this type of transaction, people come out of the woodwork with ridiculous and absurd claims,” said an Oculus VR spokesperson yesterday. “We intend to vigorously defend Oculus and its investors to the fullest extent.”

In a statement of its own, Zenimax said that Oculus founder Palmer Luckey acknowledged in writing that Zenimax’s “legal ownership of this intellectual property.”

“Oculus has used and exploited Zenimax’s technology and intellectual property without authorization, compensation, or credit to Zenimax,” reads the statement. “Zenimax and Oculus previously attempted to reach an agreement whereby Zenimax would be compensated for its intellectual property through equity ownership in Oculus but were unable to reach a satisfactory resolution. Zenimax believes it is necessary to address these matters now and will take the necessary action to protect its interests.”