Call of Duty games always have the pyrotechnics and weaponry to satisfy gamers. But to generate more than a billion dollars in sales in less than a month after launch, the main story has to be good. Forced by leaks to reveal its Call of Duty: Advanced Warfare game early, Activision has clearly recognized that it needs Hollywood production values to pull in wider audiences.

Call of Duty games are perennial best-sellers, generating $1 billion in revenue in a couple of weeks after launching in November every year. The tale in last year’s Call of Duty: Ghosts wasn’t a hit with players, and it didn’t sell as much as anticipated. Part of the reason for that was the hesitancy of gamers who had delayed their purchase of next-generation consoles. With that console transition out of the way, Call of Duty will likely have a better shot at growing sales — so long as Activision’s Sledgehammer Games studio has created an intriguing and believable story.

The first trailer actually shows a lot. The story is about the growing power of private military contractors, and one of the leaders of these corporations is the villain, played by Kevin Spacey (whose character in the political drama House of Cards, by the way, plays games). He is clearly a megalomaniac who thinks he has all the answers and needs to take charge.

“Democracy. Democracy!” Spacey says in his best scoffing voice. “Democracy is not what these people need. Hell, it’s not even what they want. America has been trying to install democracies in nations for a century, and it hasn’t worked one time.”

He says that what people really want are rules, boundaries, and “protection from invaders and themselves.”

“People need a leader who can give them both the support and the constraints to keep chaos at bay,” he said. “You give them that, and they’ll follow.” And in his most sinister whisper, Spacey says, “And that’s where I come in.”

The video closes with the phrase “Power changes everything.”

So what we have, coupled with this video that Vice produced for Activision on the growing power of the private military corporations, is an attempt by Spacey and his well-paid mercenaries to challenge the authority of the American government and take matters into his own hands. It’s going to be the government against the corporation. May the most evil entity win. 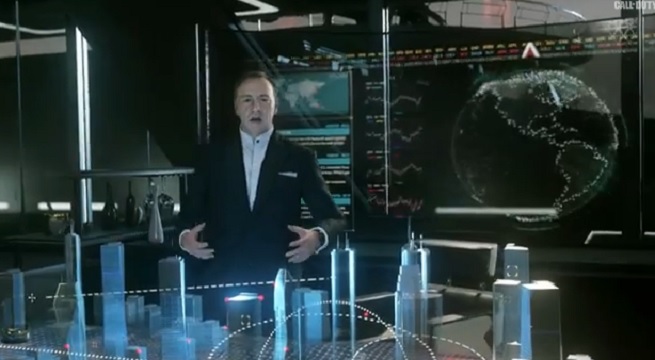