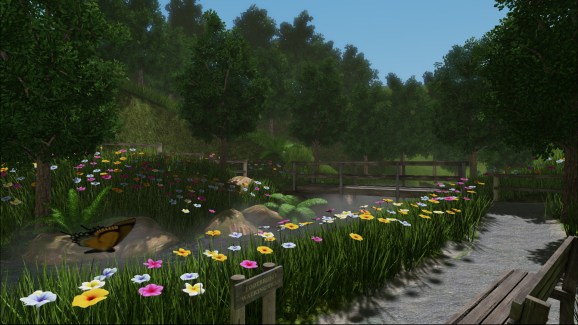 A screenshot of The Forest Project, a virtual reality environment designed to help dementia sufferers.

They’re currently seeking crowdfunding support for The Forest Project, an interactive virtual environment designed as a sensory therapy tool for people living with dementia. Created using Epic’s Unreal Engine 4 and Microsoft’s motion-sensing camera Kinect, it enables people to change the aspects of a forest setting by using large, simple gestures. With the wave of a hand, they can cause winds to blow, seasons to change, and leaves to fall from trees. They can even interact with various forms of wildlife.

“The objective of The Forest Project is to improve the quality of life for people living with dementia by escaping from the monotony of their living spaces,” said Opaque Multimedia co-founder Norman Wang. “The interactivity provides them with a sense of agency and empowers people living with dementia a degree of control over their surroundings that they could not experience any other way.”

We’re studying mobile user acquisition — help us out and we’ll share the data.

More than 330,000 people in Australia suffer from dementia, according to Alzheimer’s Australia Vic. Many people on the Opaque Multimedia team have a relative with the disease, including Wang’s grandfather, who suffered from dementia throughout his life. “[When] we first started working on the project, we did not quite realize that our work can make a tangible impact on their quality of life,” Wang told GamesBeat. “Now that we do, it is motivating myself as well as the whole team.”

“Dementia results in a slow, progressive decline in cognitive abilities. By the advanced stages, memory, thinking, and language skills are severely impaired. However, the five senses, except for smell, are usually well preserved and become the primary means for caregivers to make meaningful connections,” he told GamesBeat. “Unfortunately, sensory therapy is not carried out routinely in most formal care settings today. Although therapeutic, it is not usually considered ‘therapy’ as a medical intervention but rather a variety of stimulating sensory activities done with people with advanced dementia.”

Although no one yet knows how The Forest Project might be beneficial — even Wang admits sensory therapy in dementia care is unconventional — Kuhn hopes it will be rigorously tested.

“Psychosocial and environmental treatments are known to be useful in promoting quality of life and minimizing or preventing challenging behaviors associated with dementia,” he said. “However, such nonpharmacological treatments often lack evidence-based research. VR would be groundbreaking, and so it will be important to demonstrate its strengths and weaknesses through rigorous study. If indeed it proves beneficial, such evidence will be necessary to convince others to purchase and use this technology.”

Wang said his studio has done some tests with the Forest Project prototype to see if people with dementia have the capacity to interact with virtual environments, but to carry those tests out on a larger scale, they need the support of the crowdfunding campaign. The studio is trying to raise $90,000 by May 16. If it’s successful, the funds will go toward two key areas: development of the forest environment and serious research into how virtual environments, specifically virtual sensory therapy environments, can help people living with dementia.

If Opaque Multimedia surpasses its funding goal, stretch goals will likely include new locations such as mountains or lakes, along with new interactions and preferences. Ultimately, Wang said the goal is to put The Forest Project in every aged care facility in Australia and in similar facilities all over the world.

“When we first started, we saw the project as a very novel and interesting use of our technologies. The fact that it could really help people did not dawn on us until we saw it in use and saw people getting visibly emotional,” said Wang. “Now that everyone involved is wholly aware of the positive impacts we are making, we intend to continue to work in this area.”