With every one of its gadgets this year, Samsung has shown that it has learned from its mistakes.

This started with the Galaxy S5, and it’s particularly true for the $200 Gear Fit, a device that sits somewhere between a health tracker and a dedicated smart watch. It has none of the big problems of Samsung’s ill-fated Galaxy Gear smartwatch from last year — unlike the older gadget, the Gear Fit is sleek and well-designed, and it sports a few useful features. Most important, it’s something you might actually want to wear all day.

While everyone is eagerly awaiting Apple’s rumored wearable — the “iWatch” — Samsung has actually managed to craft a device that, on the surface, looks similar what many want from Apple.

Dig a little deeper, though, and the Gear Fit’s issues quickly come to light. But while the Fit isn’t Samsung’s ideal wearable yet, it’s a sign that the company is getting closer. 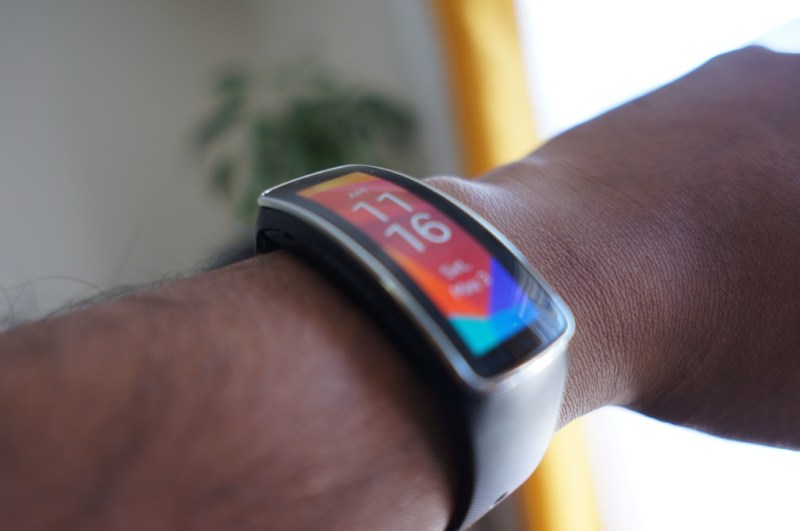 Its 1.84-inch curved touchscreen is unlike anything I’ve seen before on a wearable. The screen is bright and beautiful, even though it’s not displaying rich media such as photos. I often found myself staring at the screen just to admire it.

The Fit sports a plastic shell and watchband, which makes it surprisingly light. You can also easily swap in alternative watchbands to dress it up a bit or match your outfits. The Fit is also easy to place on your wrist, unlike the awkward clasp on the Galaxy Gear. (It’s similar to, but more convenient than, the clasp in Fitbit’s wearables, which I’ve consistently found difficult to snap in place.)

You can view the screen in vertical and horizontal orientations. I preferred the vertical mode, as it was easier to read on the Fit’s curved screen without twisting my arm awkwardly. The screen is smart enough to light up when you hold up your wrist, though that could be problematic if you’re wearing the Fit in a dark theater.

On top of looking good, the Fit packs in a bunch of features you may actually want to use in a wearable. It can count the steps you’ve taken, track your heart rate, and track your sleep. The Fit also has a few exercise modes for tracking your runs and biking sessions, all of which you can synchronize with Samsung’s S Health apps on its Android smartphones. 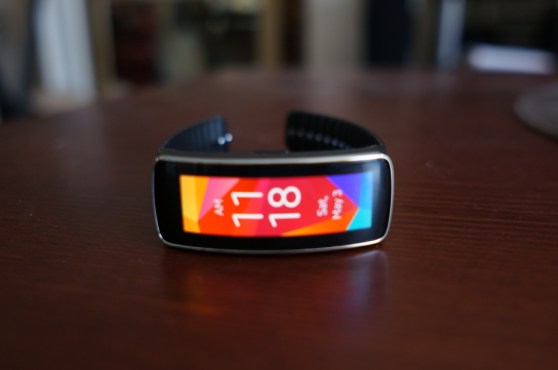 After wearing both my Jawbone Up24 and the Gear Fit together for several days, I found they both counted a similar amount of steps. But the Fit was far weaker in other respects (more on that below).

As a smartwatch, I found the Fit to be much more useful than Samsung’s Galaxy Gear. It can display notifications from your Samsung phone (things like incoming calls and texts), and you can also use the Gear to control music playback on your phone. Given the Fit’s very limited screen, it’s smart enough to shoot you back to your phone to view lengthy messages.

The Fit went through two to three days of average use before I had to recharge it. Charging involves snapping on a plastic micro-USB adapter to the back of the Fit, which you can then plug into any micro-USB cable (the same one you use to charge your Android phone).

While more convenient than the Galaxy Gear’s bulky charging case, the Fit’s charging adapter is tiny, which often left me scrambling to find it in my bag and charging corner. (Making the charging adapter a bright color instead of just jet black would be a big help.)

The Fit is a clear indicator that Samsung has matured quite a bit when it comes to hardware, but it’s also a reminder that the company’s software skills need some work.

The device synchronizes only with Samsung’s S Health app on its Android phones. But while S Health has gotten better since it debuted two years ago, it’s still a fairly basic app. It was also surprisingly unstable in my testing. I had to reinstall it a few times on my Galaxy S5 to prevent it from crashing regularly.

It’s been easy to ignore S Health entirely, but with the Fit and Samsung’s other wearables, it’s become an integral app. That’s a problem, as I had constant issues synchronizing the Fit with S Health. The data the app provides isn’t as useful as what you what Fitbit and Jawbone’s health apps turn in.

The Fit runs on a custom mobile OS — not Android or Samsung’s Tizen software — which means you’re also stuck with Samsung’s apps for now. Third-party support may eventually open up, but the Fit would also have to sell well enough to get developers interested. 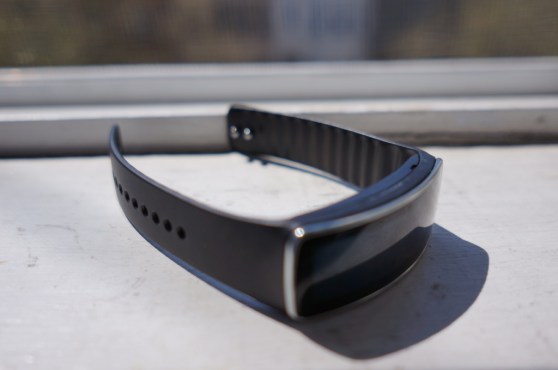 While I appreciate Samsung’s focus on a handful of useful fitness features, I also wished it was as capable as dedicated health trackers. It can’t count stairs, like some of Fitbit’s wearables, and some of its exercise modes feel like it tracks your progress arbitrarily.

The Fit is also far weaker than the Jawbone’s Up24 when it comes to sleep-tracking. It has no capability to track whether you are in light or deep sleep, and it has no special alarm to wake you at the proper sleep phase (one of my favorite features in health wearables).

Samsung tried to push the needle a bit by including a heart-rate monitor in the Fit, but I found it surprisingly inconsistent. I’m not sure if it’s a hardware or software issue, but the Fit failed to read my heart rate about 70 percent of the time. Eventually, I just gave up on the feature.

It’s also a shame that the Gear Fit is only compatible with Samsung’s most recent phones. That’s true for all of Samsung’s wearables at this point, but it clearly limits its potential audience.

Samsung deserves credit for the Gear Fit’s stunning design. Ultimately, it’s a gadget that tries to do too much, and it doesn’t end up doing anything very well.

It’s not nearly strong enough as a fitness gadget, especially when its more capable competitors are well under the Fit’s $200 price (Fitbit’s premium fitness gadgets start at $100, while Jawbone’s Up24 is $150). And while it’s a decent smartwatch, you’re likely better off snagging a Pebble or waiting until something better comes along.

On the bright side, all of Samsung’s wearable struggles could lead to something great in the future. Samsung is one of the first partners for Android Wear, Google’s wearable platform, which means it won’t be too long until we see a Samsung wearable that works across any Android devices.