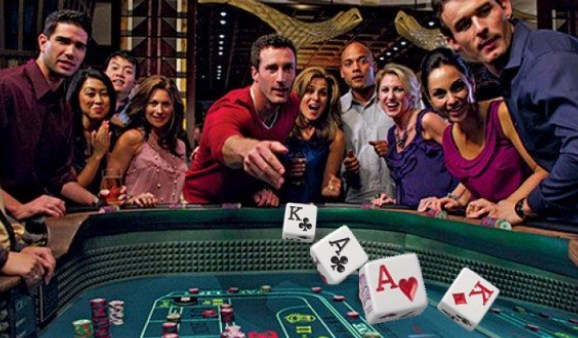 Deck of Dice, a startup with a product of the same name, has a clever idea. It puts an entire deck of 54 playing cards (jokers included) on a set of nine six-sided dice. So it’s like combining dice and playing cards in a new kind of game.

If it plays its cards right, or maybe gets a lucky dice roll, it could create a brand new entry among the 100-year-old casino games that collectively make up a $391 billion gambling business worldwide. It’s a potentially disruptive idea, and could lead to the creation of multiple games across many different sectors of the gaming and gambling businesses, its creators say. and the idea is so simple that a lot of people are going to say, “Why didn’t I think of that?”

“We have the most overdue game invention of all time,” said Tom Donelan, chief executive of Cleveland, Ohio-based Deck of Dice, in an exclusive interview with GamesBeat. “We will use it to create a new casino style gaming venture. We have the opportunity to reinvent the thrill of chance games.”

“There was an inventor who had a chocolate meets peanut butter idea,” said Bob Lindsay, chief operating officer of Deck of Dice and a 25-year game industry veteran, in an interview.

Deck of Dice is the brainchild of 57-year-old Carmelyn Calvert, an empty-nest grandmother in rural Illinois. She loves games and had a great idea one night to combine two of her favorites. She began cutting some wood dice and figured out the right combinations of the playing cards to put on each die. For instance, she decided that any time you need an Ace of Spades, you don’t also need a Six of Spaces. So she put those on the same die.

By doing it just right, she was able to preserve the ability to get all 40 different kinds of straight hands in a game of poker. That is, if you roll the nine dice, you will be able to get every kind of straight or royal flush possible in poker. She assigned the rights to Deck of Dice, and the company has patented the game system.

Deck of Dice hopes to cash in on the booming market for both physical and digital casino games. The problem most competitors have is that they all have the same games, like poker, blackjack, slots, roulette, and craps.

“Playing cards and dice are the roots of the whole industry,” Donelan said. “Everyone has commodity games.” 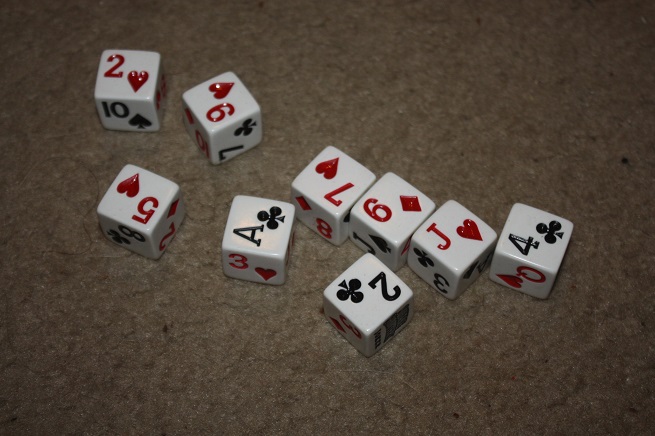 Above: Deck of Dice

With Deck of Dice, Donelan wants to create a bunch of new games that will penetrate every sector, including social casino games, mobile games, online gambling, lotteries, slot machines, and table games in physical casinos.

Lindsay said the company has global rights to commercialize the patent. Since 2011, Deck of Dice has already sold more than 250,000 physical dice at $10 per package in retail stores across the country, like Wal-Mart, Walgreens, and Target. And that was with zero promotion.

The founders also went to the Gen Con tabletop gaming conference, where they asked attendees to create their own versions of games using the dice. They came up with more than 100 different games.

“We know it is more than a barroom gimmick,” Donelan said.

There’s precedent for new games. Slingo was a combination of slots and bingo that saw great success after in was invented in 1995 by businessman Sal Falciglia. Hee created the game during his 60s by thinking about two favorite pastimes: slot machines and bingo. He conceived Slingo in his head and played it over and over again. In 17 years, players spent more than $1 billion on Slingo, and Real Networks bought the company for $15.6 million last year.

“They were a good precursor,” Donelan said. “We learned from them that we have to focus on the right opportunities. We will start with mobile, then move to the social web and promotional games. Then we can do online gambling, online lottery, video lottery, slots, and casino tables.”

But first things first. The mobile game will be a Yahtzee-like game that combines chance and puzzle solving. The team has created an iPhone prototype game that tests the concept but hasn’t been optimized for monetization. Lindsay said the game’s retention figures are meeting general mobile gaming expectations.

“It’s now time to optimize that game,” Donelan said. “We do plan to find huge marketing partners to help. But first things first.”

Deck of Dice is seeking a round of funding for its digital business and casino versions. And for games like lotteries, which are highly regulated, Deck of Dice will need some big partners. The company hopes to launch a mobile game by the summer and to start doing promotional deals late in the year.

The company has six employees, mostly in Cleveland, but it is establishing its digital game studio in the San Francisco Bay Area.

“We feel like we are at the beginning of a fresh new form of entertainment,” Lindsay said. “It can have multiple games, and it is proprietary.”