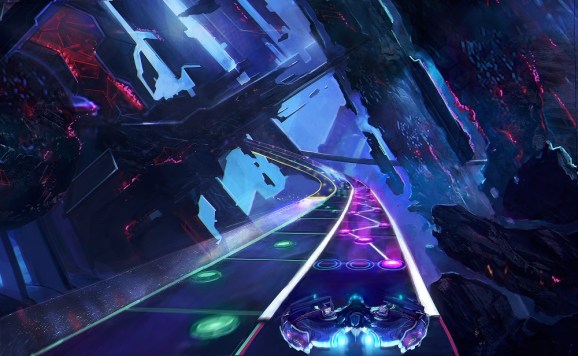 Harmonix Music Systems has launched a Kickstarter crowdfunding campaign to raise $775,000 for a new version of a music-rhythm action game, dubbed Amplitude, in a franchise that it hasn’t revisited in 11 years.

The original Amplitude was the 2003 sequel to Frequency, which was Harmonix’s first controller-based beat-match game for the Sony PlayStation 2. The new game will be targeted at the PS3 and the PS4. The new campaign will be the latest test of whether nostalgic gamers can finance a relatively big project for a major video game studio.

The creative lead will be Ryan Lesser, art director at Harmonix, which is the maker of games like Rock Band, Dance Central, and the upcoming Disney remake of Fantasia. Harmonix hasn’t had trouble lining up publishers for major games, but Amplitude is a bigger risk because it doesn’t have that many contemporary fans. So it makes sense for Harmonix to offload some of the risk by getting gamers to fund it and to prove that there is demand for it.

“Amplitude is an awesome game,” Harmonix said on its Kickstarter campaign page. “We want to make a successor for modern consoles but we need your help. These games became legendary for their unique soundtracks, their snappy, frenetic action and the zen-like ‘flow states’ that players entered into when they got into the groove.”

“Still, there was a quiet clawing in the back of our minds,” Harmonix said. “Pleas from Amplitude fans, strangers on the street, and veterans of the studio — we needed to revisit this era of gaming and update it for the modern age.”

Harmonix wants to deliver an updated soundtrack, cool new visuals, and fine-tuned controls. These improvements will be layered on top of the core mechanics and hallmark difficulty that made the original games memorable. Harmonix felt like it perfected its methodology for “beat matching” on Rock Band. It will apply that learning to Amplitude and get it to run smoothly at 60 frames per second or the speed of modern shooter games.

The high-definition game will have single-player and local multiplayer modes, as well as online leaderboards for bragging rights. Harmonix said that the original Amplitude was “hard as hell” at higher difficulty levels and that the team will preserve this approach. It will be easy to learn, but tough to master.

The team will include many of the original developers who made the game a cult classic.

“This project is intended to be a love letter to old-school PS2 fans, but we need to know that this is something you actually want,” Harmonix said. “This is the project we desperately want to make, but we can’t do it without your interest and support. Help us prove that there is a place for challenging, high-polished rhythm-action games in the modern age.”