U.S. Federal Communications Commission chairman Tom Wheeler is in a bind. Idealistic, nonprofit browser maker Mozilla thinks it has a way for him to get out of it.

Mozilla made the suggestion today in blog post titled “Protecting Net Neutrality and the Open Internet.” The nonprofit organization, which was recently in the news for its embarrassing CEO and board shuffling, also sent an official petition to the FCC (.pdf).

So why is a browser maker weighing in here? For one thing, Mozilla has a mission to increase Internet access, openness, and opportunity — and net neutrality fits right in with that mission. For another thing, the FCC seems stuck on this issue.

Wheeler says he wants to guarantee network neutrality, but he doesn’t want to piss off the big telecommunications companies with whom the FCC shares a fast-spinning revolving door at the highest levels, including Wheeler’s (he was a telco lobbyist before joining the FCC).

Also, the courts say the FCC doesn’t have the regulatory authority to enforce Net Neutrality as long as Internet service providers are classified as “information services,” not common carriers — a precedent that the FCC set for itself back in 2002 in its “Cable Modem Order.”

What’s an FCC chairman to do? He could lead the FCC to reclassify ISPs as common carriers, throwing powerful telcos like Verizon and Comcast into a litigious and political fury. He could roll over, refusing to regulate net neutrality at all, throwing Internet activists into a tizzy. (Wheeler insists he has no plans to give up on net neutrality despite a recent FCC notice sounded like he was doing just that, with proposed rules that would give companies willing to pay for it a fast lane to your cable modem.)

Or, Mozilla suggests, he could direct the FCC to classify a new kind of telecommunications service: one that provides connectivity between a remote server (like Dropbox or Netflix) and an ISP’s end users (ordinary folks in their homes or offices who are just trying to upload a file or watch a movie).

This new service, Mozilla suggests, would qualify as a “Title II” telecommunications service, giving the FCC the authority to regulate it the same way it regulates telephone service, enforcing net neutrality.

To understand how that works, you have to get a little bit technical.

Currently, FCC regulations recognize just two main kinds of business relationships that ISPs have: one with the customers to whom they’re providing Internet access, and the other with their peering partners (relationships that connect the ISP to the “cloud,” aka the rest of the Internet). 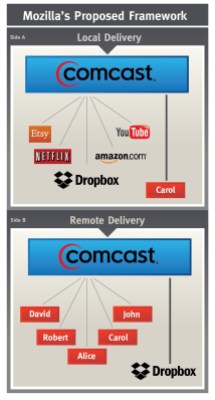 But, Mozilla says, in the modern Internet, there’s a third kind of relationship that ISPs are involved in — even if they don’t control the entire connection — and that’s the connection from an end-user to a major website or Internet service. If you’re watching Netflix via your Comcast cable connection, Comcast is providing a service to you and to Netflix — even if Comcast doesn’t itself have a direct connection to Netflix’s servers.

Mozilla’s proposal simply asks that the FCC classify this kind of connection, which it calls a “Remote Delivery” service, as a telecommunications service, bringing it under the regulatory authority of the FCC.

That way, if Netflix strikes a deal with Comcast to deliver its videos to Comcast customers faster than, say, Amazon Prime, the FCC would have the authority to weigh in on the matter.

“The privity that has been established between ISPs and remote endpoints in the modern world of finely tailored network management allows the Commission to declare Title II authority for services between these two classes of entities without overruling the Cable Modem Order and its successors,” Mozilla writes in its petition.

“Furthermore, to fulfill its statutory duties as applied to the modern Internet, the Commission must be able to govern ISP management of traffic associated with remote endpoints.”

While Mozilla’s 17-page proposal gets a bit technical and lawyerly, it’s actually a pretty neat way to cut through the Gordian knot faced by today’s FCC.

The question is: Will Wheeler pick up that sword or not?