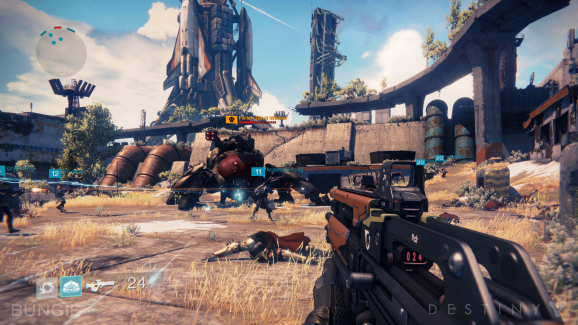 Call of Duty publisher Activision is about to spend half of a billion dollars to blaze a potential path to higher profits over the next 10 years.

At the Milken Institute conference in Los Angeles last week, Activision chief executive officer Bobby Kotick revealed that his company is spending $500 million to develop, market, and support the upcoming sci-fi shooter Destiny, according to Reuters. The new game from Halo developer Bungie is likely going to attract a huge audience when it debuts on Sept. 9, but that budget is raising eyebrows. Most big-budget Hollywood blockbusters don’t cost half as much as that, and publisher Take-Two spent approximately $260 million on Grand Theft Auto V, which was 2013’s most-successful game. Destiny (and nearly every other game) is unlikely to sell as well as GTA V.

We’ve reached out to Activision for comment, but the publisher is planning to report its year-end financial results today after the market closes, so it is in a quiet period. The company will likely elaborate on its plans for Destiny during its conference call with investors after the 2 p.m. Pacific market close.

Destiny is a first-person sci-fi shooter in which players fight against one another as well as work together to collect items and overcome enemies. It’s the first new property from Bungie since it debuted Halo to massive success in 2001 for the Xbox. Kotick and Activision are positioning it as its next big series that will live alongside the multibillion-dollar Call of Duty and Skylanders franchises.

That’s where the $500 million investment in Destiny makes a bit more sense. To recoup that cost with one game, Bungie and Activision would have to sell around 16 million copies of Destiny at $60. Those are Call of Duty figures, and it’s unlikely that a game with zero brand recognition (unlike Call of Duty and Grand Theft Auto) will do that well out of the gate.

But Destiny isn’t just a one-and-done game. Activision has a 10-year contract with Bungie that gives it a ton of control over this new franchise, and that $500 million is going toward the backbone technology that will likely power most of Destiny’s sequels over the length of that decade-long deal.

“If you’re making a $500 million bet, you can’t take that chance with someone else’s intellectual property,” Kotick told the audience at the Milken conference. “The stakes for us are getting bigger.”

Even if Destiny comes out and only sells 8 million or 9 million copies — which is what Sterne Agee analyst Arvind Bhatia is predicting — the foundation is in place for its sequels to make back the rest of this upfront investment. After all, Activision has seen that before.

Call of Duty 4: Modern Warfare was a breakout success. It sold around 13.5 million copies, but its sequels went on to surpass 20 million in sales.

And while Activision is spending $500 million for this first game, it’s unlikely that Destiny’s sequels — once all the technology is in place — will cost nearly that much.