What’s the greatest game ever? If I asked one of you, you might say The Legend of Zelda: Ocarina of Time or BioShock. If I asked my grandpa, he would have said baseball.

Honestly, I can’t really argue. Baseball has lasted longer than a century as one of the most interesting, dynamic, and dramatic games we play and watch. And when it comes to digital versions, none have matched Sony’s The Show series. It dominated the baseball market for all of last generation; each year’s version of The Show was a highlight of the PlayStation 3’s library.

Now, The Show comes to Sony’s new console, the PlayStation 4 (out today, a month after real baseball’s first game of the season. The PlayStation 3 and Vita versions came out last month). With the generational leap, you can’t help but have some lofty expectations. The Show was always a great looking series, but can the more powerful hardware give the franchise a noticeable boost? 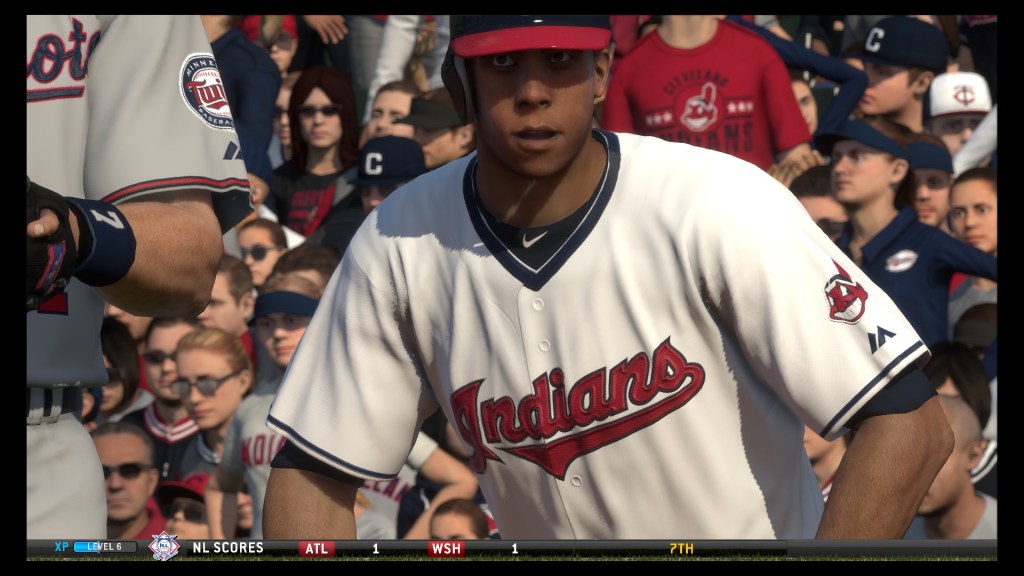 Above: Being from Ohio, it’s hard for me not to just fill this article up with Indians players.

I could almost copy and paste this section from my review of last year’s MLB 13 The Show. This year’s version is still an incredible baseball game. Pitching, hitting, and fielding all feel great, and you have an incredible amount of options to fine-tune the experience to your preferences. With pitching alone, you have three different control options (one that uses an analog stick and two that require precise button clicks).

My favorite mode, Road to the Show, is also back in fine form. You create a player and experience his entire career from the minor leagues to the pros. While playing games, you only have to participate in moments that directly involve your character. For example, a first baseman would only play his at-bats and defensive moments that involve the ball heading his way. You earn points for good performances that you can then use to strengthen your player. It’s a gratifying and expansive mode that’s as much a role-playing game as anything.

The presentation is also fantastic. The camera angles and commentating perfectly replicate the experience of watching a televised game. Of course, you can customize all of that, too, if you’re looking for a less flashy (and time-consuming) game. 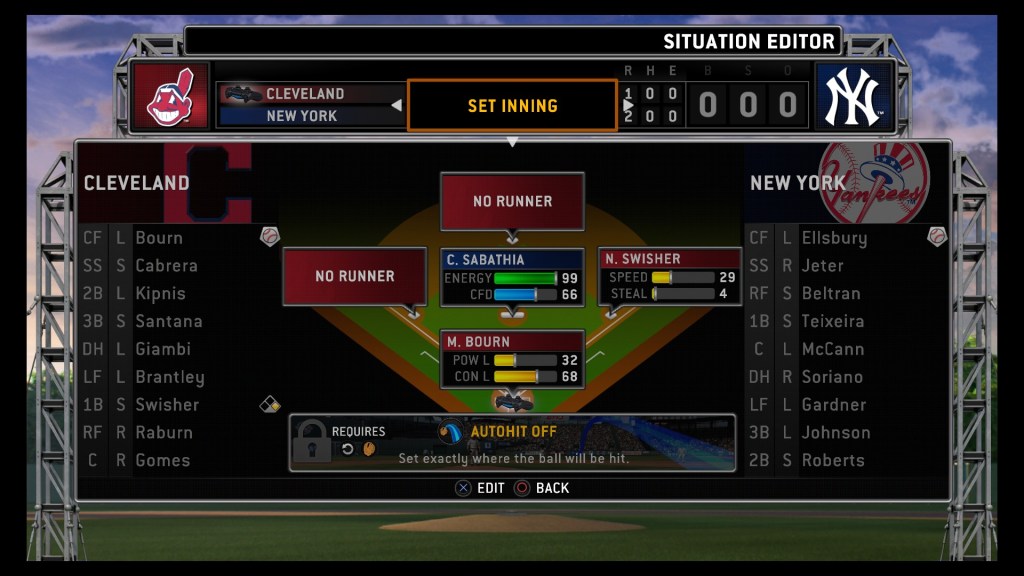 Above: You create Community Challenges with this menu.

Community Challenges are the best new addition to the console versions of MLB 14 The Show. They’re essentially specific goals that you have to achieve with certain conditions. For example, get the last out in the 9th inning. Interesting, other players create all of these with an easy-to-use interface. Plus, you have to prove you can beat your created challenge yourself before you can post it, so you know none of them are impossible.

Playing a regular game in The Show can take a long time, so it’s nice to have these bite-sized challenges as another option. It’s also an interesting way to get players involved that, unlike the intimidating Franchise mode (which has you manage your own team either offline or in a league with other players), pretty much anyone can participate in. 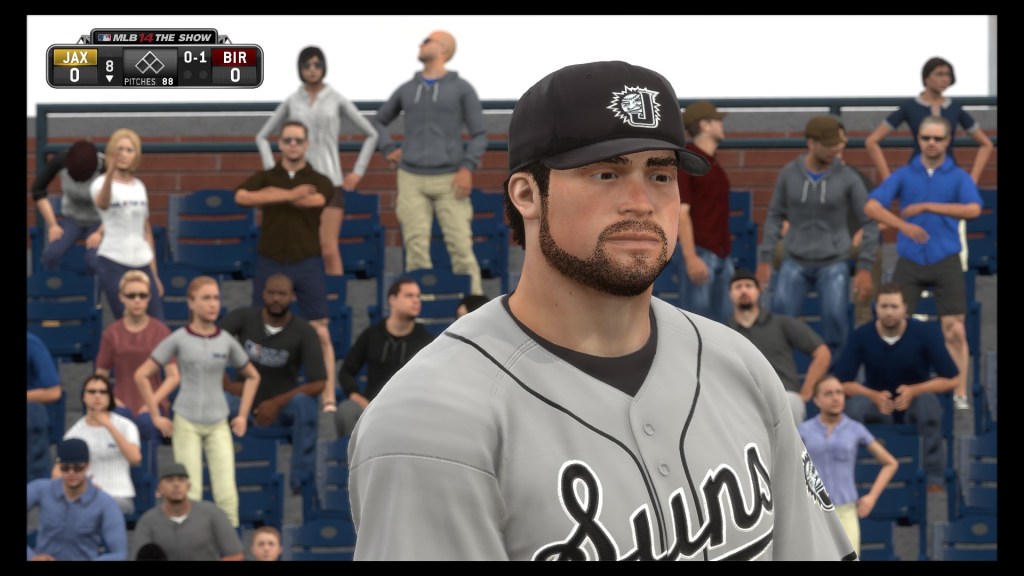 Above: My Road to the Show character. I like to think he looks a bit like me.

Not a huge graphical improvement

Yes, MLB 14 The Show looks better on the PlayStation 4 than it does on the PlayStation 3, but it’s not exactly an earth-shattering difference. Honestly, part of the problem is that The Show on the PS3 has always been a great-looking series. It’s kind of hard to really notice a big difference. Sure, little things will stand out, like the way uniforms realistically move and the greater variety in the models that make up the crowds, but you won’t experience that elusive next-gen wow factor.

In fact, some things look a bit wonky, especially beards. While the short, trimmed ones look fine, full beards look weird and unrealistic. It’s like someone sculpted them out of clay. Also, some of the background elements can look cheap, especially flat, low-res pictures of still cars that awkwardly move around a distant highway.

Again, I’m not saying that MLB 14 The Show is a bad-looking game. It just isn’t the photo-realistic upgrade some were hoping for. 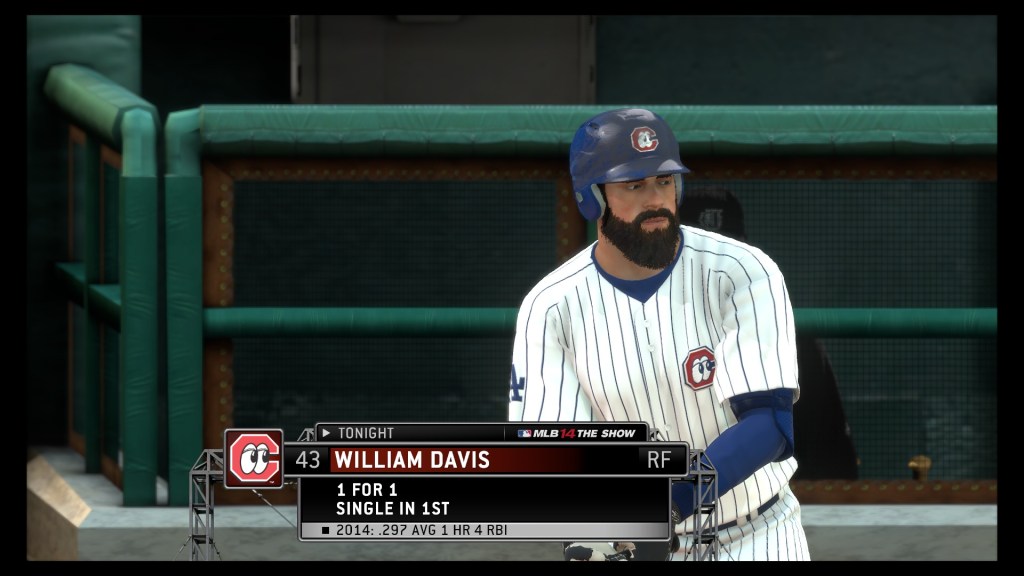 Above: That beard is weird.

Quick Counts is a new feature that makes a regular game faster by inserting you into randomly generated pitching counts. So, instead of starting every at-bat with 0 balls and 0 strikes, you may have 1 ball and 2 strikes or 3 balls and 1 strike. Yes, this does speed up the game, but who would choose to play like this? It’s like agreeing to play a game of chess after someone randomly removed a few of your pieces. It’s substituting skill with a random element of luck.

Yes, baseball does always have its random elements (you never know how the ump is going to call those borderline pitches), but this is absurd. The most basic rule of baseball is that you have three strikes until you’re out.

Thankfully, like almost everything in The Show, this mode is optional. Still, it’s such a terrible idea, I have no idea why it’s even there. If you’re looking for a fast game, baseball probably isn’t for you. 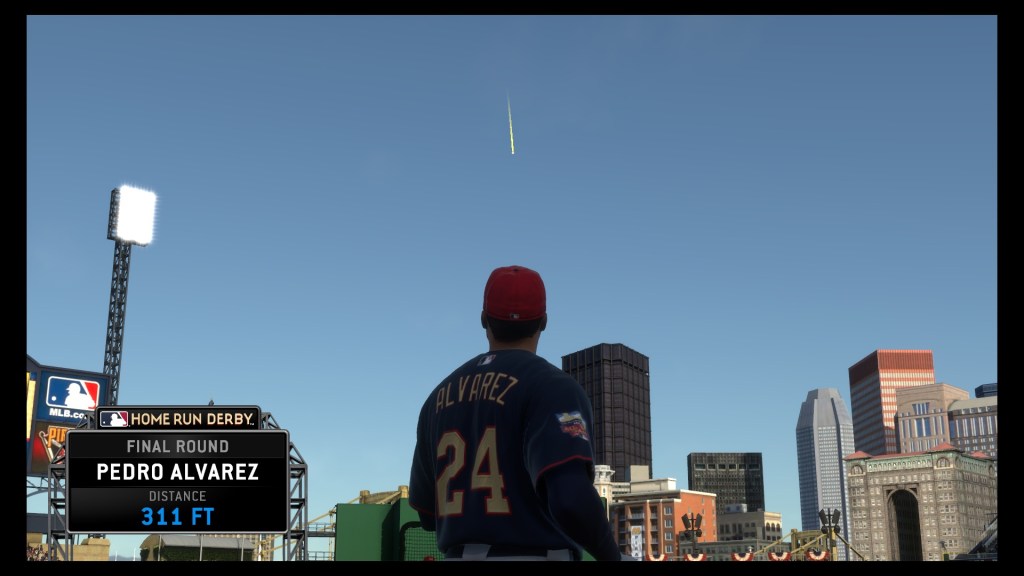 This is a tricky one to score. Again, MLB 14 The Show on the PlayStation 4 is a great baseball game, and I undeniably have a great time playing it. Still, as a next-gen debut, it is a little underwhelming. Sure, all of the features of the PlayStation 3 version are here, but the graphical improvement is more of a single than a home run. Of course, sometimes you need those small base hits to win a game, but let’s be honest; the homers are more fun.

MLB 14 The Show is out now for PlayStation 4, PlayStation 3, and Vita. The publisher provided GamesBeat with a copy of the PlayStation 4 version for this review.