Several other games on display were much more forward-thinking in their visual design. The upcoming PS4 game Source is a sleek-looking 3D platformer from Fenix Fire in which you control a bio-mechanical dragonfly. You can’t fly freely through the geometric levels, but you can hover over the ground and target electrically charged foes.

Above: Robots flutter like birds and bugs in the sci-fi action-platformer Source.

Source is still early in development, but we could tell that visually complex sci-fi flicks like Tron and Speed Racer inspired it. It’s the kind of look that makes people stop and take notice.

“It’s that freshness, that newness, this is something curious,” Boyes said. “It catches your eye. I think that gives game designers and developers a challenge — to build something that people haven’t seen before. Source is something new.“

Brian McRae, Fenix Fire’s CEO, told us his company is looking ahead to virtual-reality headsets like Oculus Rift and Sony’s own Project Morpheus as possible peripherals for Source.

Adam Boyes agrees that there’s potential. “I think for a game like Source, one of the most exciting things about where we are today with mobile, PC, VR, and consoles, [is that] the future is literally infinite,” he said. “We have no idea where this world’s going to take us.”

Supergiant’s last game, Bastion, was a critical and commercial success on the Xbox 360 and iPad. Its next game, Transistor, keeps the same isometric viewpoint and action-RPG elements, but it takes place in a futuristic world with Matrix-like code overlays and bits of flying data. It launches May 20 for PS4.

Besides the sleek-looking visual style, which combines expressive human characters with alien-looking robot foes, Transistor also has a unique gameplay hook. At any time, you can pause time to plot out a strategy attack and then let it run in front of you. 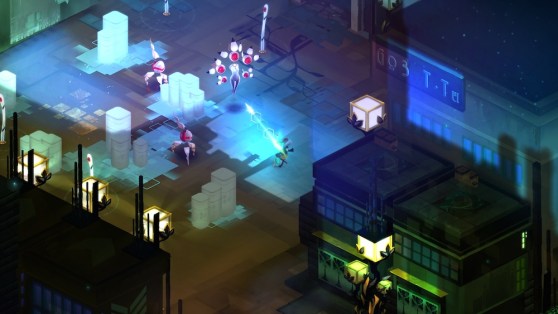 Above: The next game from the creators of Bastion is set in a digital future.

Greg Kasavin, Supergiant’s creative director, told us that this strategy leads to “moments of anticipation, and you’re not sure if [that strategy] will blow up in your face.” We discovered this for ourselves when a forward assault on a giant robot ended with us taking unnecessary damage.

Boyes said he appreciates the choices inherent in Transistor’s gameplay. “You’re melding two things that aren’t usually melded,” he said. “Tactical gameplay and live action are not melded in very many games, and they’ve done it in such an amazing way where it feels natural.”