Fusing past and future

Some games demonstrate that the developers were simultaneously embracing concepts from the past and imagining the future. One of these was Starwhal, an outlandish PS3 and PS4 multiplayer game out this fall in which you control a narwhal trying to impale the other players. 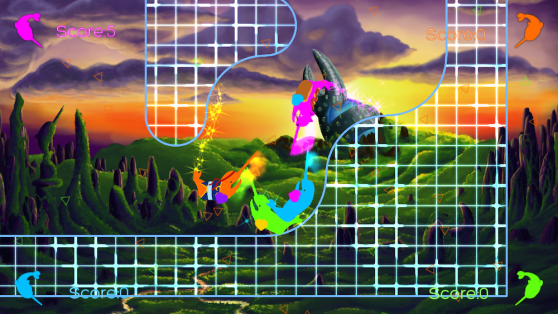 Above: Starwhal manages to feel like a dated vision of the future.

With its fantasy background and grid-based levels, the clashing visual styles in Starwhal reminded us of an ’80s arcade or early attempts at movie CG. However, Boyes told us there’s more to this game than just the retro-future visuals.

“To me, it’s more about the multiplayer aspect of it, the dance of the whales,” he said. “It sounds so cheesy, and when you say it, it almost sounds poetic, but literally, all you’re trying to do is hide your heart from getting pierced. Sounds cheesy, but the manic side of that is so powerful. Don’t get near my heart! Stay over there so I can take you out first!”

Indie-developer darling Jonathan Blow’s previous game, Braid, had a main character and environments that looked like they came from an illustration in a 19th-century storybook. The Witness has a more modern style. It comes out in September for PS4, and this early look impressed.

The Witness takes place on an uninhabited island, which is rendered beautifully in a style Blow called “idealish” and “reality-like.” The world is not heavily cel-shaded but subtly accentuated with colors that highlight its foliage and abandoned buildings.

As you roam the island, you’ll find control panels containing basic line-drawing puzzles. These challenges will unlock doors and operate machinery once you complete them. 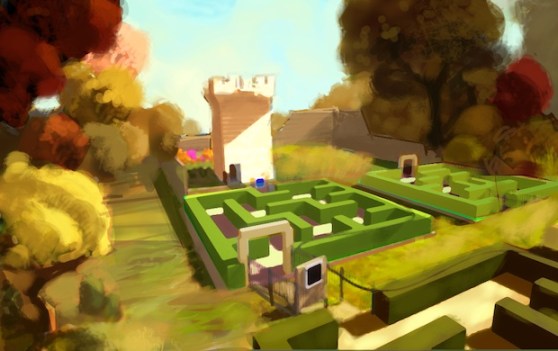 Above: The Witness switches constantly between technically advanced environments and simple path-drawing puzzles.

The Witness is reminiscent of first-person adventure games like Myst, but Blow told us that sequential puzzles in his game are designed to “avoid the adventure games’ fumbling.” The island in The Witness looks ornate, with vast and densely rendered environments, and the simple puzzle panels can also be strangely archaic.

It’s this balance of styles that Boyes thinks will make The Witness a successful adventure game. “I think Jon Blow and his team have done such an amazing job of that dichotomy of feeling like I’m in a lush world, getting challenged by these new mechanics and trying to explore,” he said. “It really does a great homage to the Mysts back in the day, figuring out ‘how do I get out of this beautiful scenario’ but having more of that 3D world around me.”

Best of both worlds

Some players will appreciate the retro-style games that remind them of the past while others will gravitate toward the titles that show off their new PlayStation hardware and resemble a vision of the future, but it’s not always such a clear division.

Even the ancient-looking titles contain evolved gameplay and are hybrids of different genres. The modern-looking ones are based on classic motifs with historic inspiration. Other games alternate back and forth between the past and the future, fusing the two together. With this PlayStation lineup, you won’t have to choose sides, because they’ll coexist in the present.