When it comes to online sales, Amazon is the undisputed king. The race for second place, however, just got a lot more interesting.

Apple now holds the number two spot, according to data from trade publication Internet Retailer, with online sales reaching $18.3 billion in 2013. The company took the position from Staples, which had been Amazon’s runner-up since 2006.

Staples’ web sales growth was sluggish in 2013, with a meager one percent increase to $10.4 billion from the previous year. 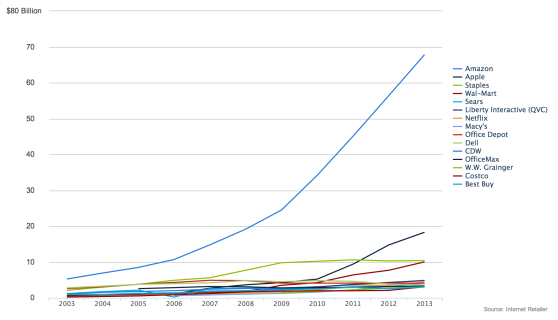 Amazon continued to extend its first-place lead, with its online sales growing to almost $67.9 billion in 2013. The e-commerce giant sold more than the next 10 biggest competitors online, including Wal-Mart, Sears, Netflix, and Apple.

The top two online retailers may offer the easiest way for customers to purchase goods. By having millions of credit card numbers on file, both companies give customers the option to buy items with one click. Ease of use is translating into success for mobile purchases on Apple devices, so it’s not surprising that Amazon has been selling its own hardware, such as the Kindle Fire and an upcoming smartphone.

Online retail still hasn’t dethroned brick and mortar sales. Despite rapid growth since 2004, Internet sales only account for six percent of sales in the U.S. retail industry, according to data from the Department of Commerce.