Portsmouth, England, is where Lord Admiral Nelson’s flagship, the HMS Victory, is enshrined. It just might also be home to the most innovative marketing automation system on the planet. 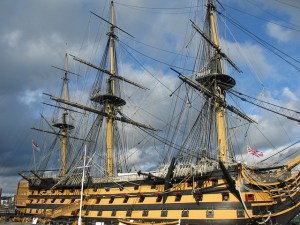 But two things are true about almost every kind of marketing automation system I’ve ever reviewed or seen: They have typical software-style drop-down navigation and command menus, and they require integration with CRM.

Neither is true of UK-based Salesformics.

“You’ll notice a complete lack of menus,” Salesformics’ product chief, Stewart Rogers, told me yesterday. “The reason for that is because we’ve reengineered how people use software.”

If you want a pizza, he explained, you probably go to Google and type in “pizza near me” or something like that. In Salesformics, if you want to do something, you type in what you want into the software-as-a-service’s big search box — or what the company calls the “GX box” — and just go do it.

Above: Look Ma, no menus

It’s not the first menuless software I’ve seen, but it is the first menuless marketing automation system — and the first menuless business system — I’ve ever seen. My first concern was: Do I have to remember a list of commands? Is this like old-school command-line computer interfaces? So I asked Rogers to demo the software for me over Skype, and the system accepts natural language, doing what you’d expect it to do.

And some things you don’t expect.

Type “London” into the box, and you’ve got all your contacts in that geography. “London leads” gives you all leads in that area; “London customers” gives you all current customers. “Create workflow” brings you to the workflow creation screen, where you can build nurture and drip campaigns with triggers, delays, and actions.

The result is a remarkably clean system with very little interface cruft — more inter and less face, as I once said about iOS 7. And much quicker to use, at least for those kinds of commands. 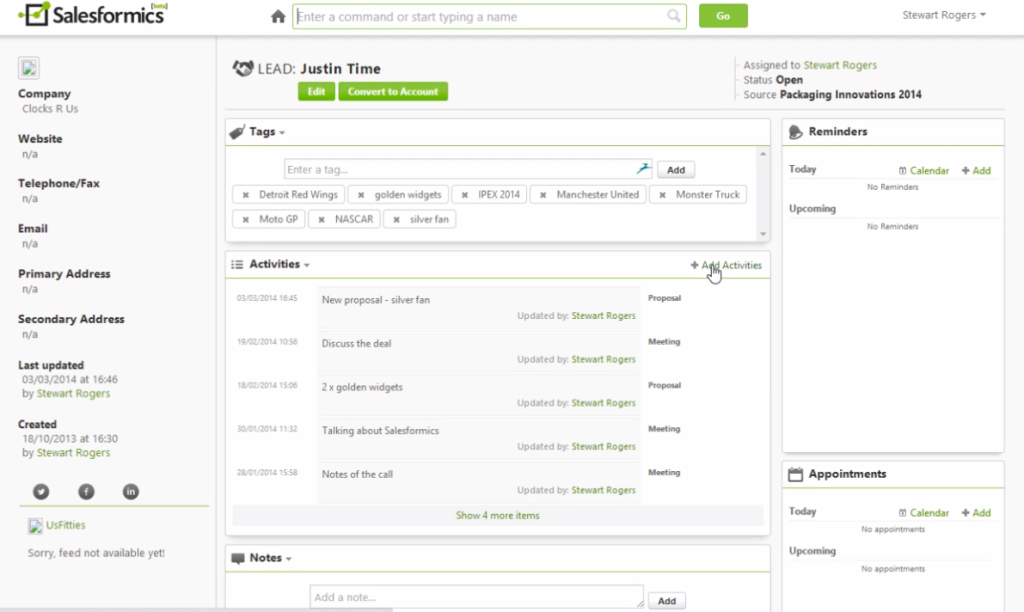 Above: Integrated view of a lead, with marketing automation features (activities and campaigns) and CRM features (reminders and appointments).

It’s definitely impressive, though you would need to try to fight the system a little personally to know for sure that it works with alternative terms such as “make workflow” or “new workflow,” as not everyone uses the same language for everything.

Rogers says it’s proven incredibly simple to use in beta.

“Solutions that are available tend to be quite complicated,” he told me. “In CRM, on average, if you spend a dollar on licenses, you spend a dollar on training … Salesformics is so easy to use, you don’t need any training, implementation, integration. Our customers understand how to use it within half an hour and are proficient in a day.”

Above: Everything London, all at once.

Which brings up the other interesting point: marrying CRM and marketing automation.

Integrating these two technologies is not exactly new in the small-to-medium-sized business world. ZohoCRM has a similar vision, SalesPilot integrates basic CRM features into its marketing automation tool, as does InfusionSoft, which boasts 21,000 business customers. But it’s not exactly common, either.

I asked Rogers why he integrated the two.

“Everyone’s been trying to break down the silos between marketing and sales,” he said. “Marketing is really great at putting down rules, but sales is still very much an emotional business … so by making marketing automation elements usable by everyone in the company, salespeople can build their own drip marketing, top of funnel, and lead generation systems, and the customer gets one tone of voice all the way through the communications.”

Above: Sales reps have their own customizable dashboards.

That might be a little radical for your average company. Rogers, the Englishman, used a football analogy. (Not, not NFL football.) A manager or coach, he says, doesn’t run onto the soccer pitch and kick the ball for his players — he lets his players do the job. The same, he says, is true for marketing and sales.

Of course, this may not work for larger companies. Salesformics is initially focused on the SMB space, and there, where marketing and sales are perhaps a little less distinct, and marketing has fewer resources (and maybe just one or two people), that may work better.

But where it works, it makes complete sense.

You want to market to your existing clients just as much, if not more, than to prospective clients, and you want to stay in regular contact with them in ways that are important to automate, or else they’ll get forgotten. Just in a different way, and perhaps at a different pace.

One feature that’s particularly impressive in the product is how it builds custom workflows visually — and especially how it integrates them into services that you might not expect.

Rogers demoed how a marketer might build a nurture program, starting with a visit or a sign-up. Delays, triggers, emails, RSS feeds, and reminders for sales people are all easy to add. Most interesting, though, was the ability to integrate Twitter listening. 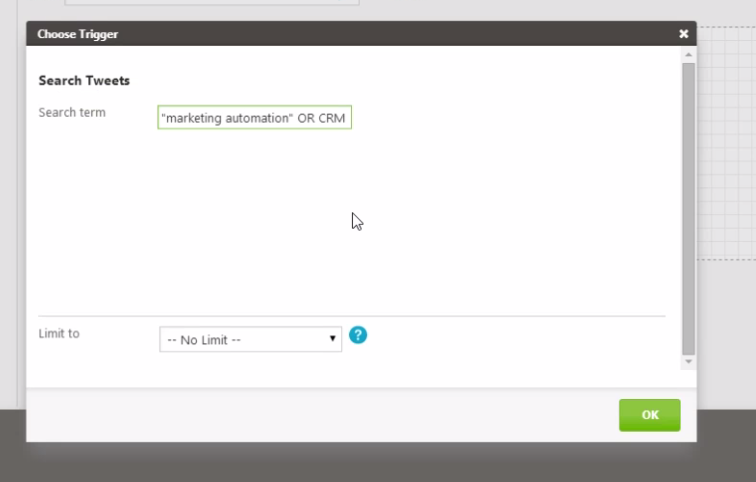 Via Salesformics, you can automate listening on Twitter for mentions of your company, your product, your category, or even just negative tweets. You can automatically route those to Dropbox in Excel, so you can do some analysis on them, or keep them within the system to action them immediately.

More powerfully, you can do automated analysis within Salesformics on those tweets, matching them up against segments in your database. Imagine a prospect tweeting for help on finding a CRM system, or a current customer who seems to be looking for a new whatever-you-sell, or a prospect tweeting that he’s in NY right when your NY training session is going on.

“Think of it as IFTT on steroids,” Rogers said, referring to the visual Internet programming site that lets you tie together disparate services such as Kindle and Gmail and RSS and Evernote. “Do this, then this, then that, then wait a bit, then do this, then …”

It reminds me a little bit of Vocus, which trolls Twitter (no, not in that sense) for buying signals and then kicks off marketing automation based on the results. 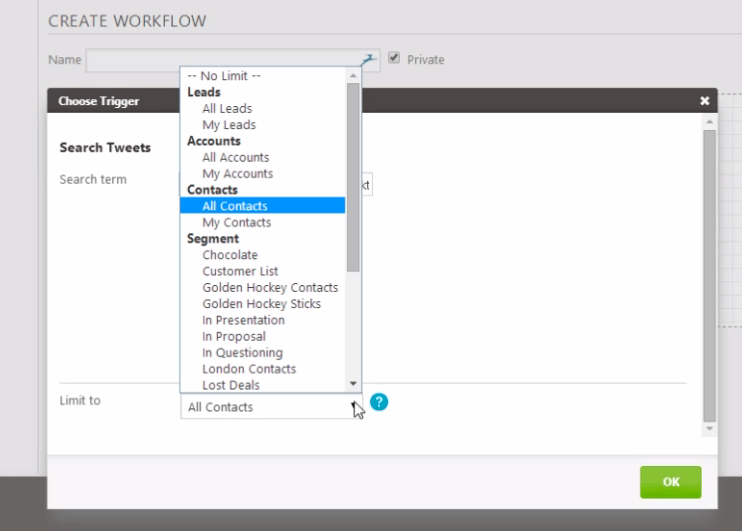 Above: Matching tweets against segments of your customer and prospect database.

The system integrates with your blog’s RSS and LinkedIn, can send tweets via Buffer, works with EventBrite for ticket sales, and can send emails to segments of your customer and prospect database. That’s just the beginning, says Rogers, who plans to integrate into “all manner of systems,” and not just the obvious ones.

I have to admit, after seeing Salesformics demoed for the better part of an hour, it’s a system that looks simple and even fun to use. It’s one I’d like to use myself.

But the company is up against very stiff competition.

Innovation in the marketing technology space is exploding, and that’s also true in marketing automation. At the low end of the market, there are literally dozens of solutions springing up. At the high end of the market, the big boys like Oracle and Salesforce, IBM, Adobe, and Microsoft are investing millions of dollars and hundreds of employees each to build the latest and greatest. In the midmarket, Hubspot, Marketo, Act-On, and others are claiming their share of the market.

And the drums of consolidation are beating, with the big players stocking up on ammo for the battle.

Above: Building a workflow with a delay.

So what can a tiny little innovative solution do in such a busy space?

Get acquired, for one. That’s a realistic possibility if the software is as innovative as it appears, and if any of the midsized or larger players feel like it could fit into their portfolios.

But the other option is that, since penetration in the marketing automation space is still so abysmally low, there’s room for all — or at least many — to grow.

Salesformics is priced at $99/user/month, with unlimited contacts.