Having Apple feature you on the App Store can make or break a mobile game, as it helps you stand out among a million competitors. But this is easier said than done.

Michael Ehrenberg, a former Apple App Store marketing manager, gave some advice on the difficult question of how to get Apple to feature a game. Speaking at the Mobile Gaming USA conference Tuesday in San Francisco, Ehrenberg noted how he was on both sides of the fence, as he also worked in marketing at mobile game publisher Gameloft. His advice was rare in that Apple itself just never explains its ways in a public way.

Ehrenberg sat in on the meetings where Apple’s curators decided what to feature. Those who get featured will feel like they’ve won the lottery, given how much competition is out there.

Some tips he had were common sense. Make a great game. Make sure it exploits the newest features of the iOS software as well as Apple’s latest hardware. And don’t just concentrate on your game. Concentrate on selling your game. That means you have to sell it not only to customers, but to press outlets and to Apple itself.

“Developers put so much work into their games,” he said. “But they should put as much time and energy and love into selling the game as they do building the game.”

In that sales pitch, you sell a story. You tell about your passion for the project, why you wanted to make it, and how far you’ve come. You show a prototype of your game early and show it again when it’s closer to launch so that Apple’s team can feel like they’ve been in the loop and can plan for a coordinated launch. You need to show a game weeks before it is due to come out, not days. 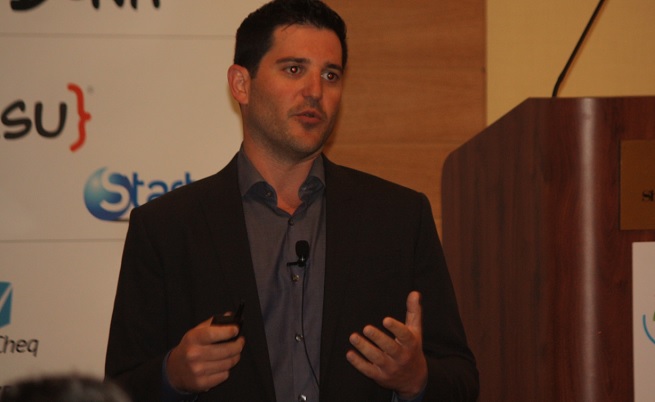 When Ehrenberg was at Gameloft, he would stake out a spot at a coffee house near Apple. Then he would call his contacts there and say that he had a meeting with someone at Apple and that he wanted to show them a new game. If they spared 15 minutes for meeting him, that was all that he needed to keep them informed about an upcoming game.

He noted that some developers have the impression that Apple can be paid to feature games. He said that’s not the case, as the marketing team for the App Store really focuses on what consumers want to see, as if they were putting together a reviewers’ essential guide.

“It is 100 percent hand-curated,” Ehrenberg said.

The one exception is the “free app of the week,” where a developer permits Apple to give away a paid app for free for a short time. That massive discounting can create huge awareness and viral growth for a game, and it usually pays off, Ehrenberg said.

The App Store team is global, and regional teams select content to feature that is relevant on a local basis. College basketball apps are featured in the U.S. during March Madness, but those apps don’t appear in the featured spots of United Kingdom’s store.

The team of curators themselves try not to meet too much with developers and get influenced by them. It’s like a Church and State division.

“You can’t pay them off or talk to them,” he said. “They are the sole keyholders for featuring games. They hide behind the curtain, like Oz, and want it all to be about the quality of the games.”

The curation team makes its decision in a closed meeting, where the marketing folks, who meet with developers, are not allowed. But the marketing team does its best to seek out the best content. They take emails at appstorepromotion@apple.com and appstoremarketing@apple.com. These teams want to know about a game, track its progress, and evangelize it within Apple.

They usually want to know the details of how your game takes advantage of the technology in the latest iPhone or iPad. You have to make sure that the frame rate of your animations is good. When they see what they want, they will know it. You also want to make sure that you give Apple some kind of exclusivity so that it can get a competitive advantage over rivals.

The game should be released on a Thursday, so that you can take advantage of the changeover in the App Store. Beyond that, some marketing is seasonal. You may have to tell Apple about a Halloween game promotion about a month before the day.

You can’t pull tricks or do anything deceptive in your apps. And you have to be wary about including any mature content, which is a red flag for Apple. If you’re targeting a game at kids (which is going to be less and less permissible in the future), you better not include a $99 virtual goods purchase in the game.

“Apple is extremely sensitive to how its products look in the marketplace,” Ehrenberg said.

You can test drive your products in certain markets. But don’t put them into markets where the press is sure to discover them and write them up. That will steal your thunder, and it may lose you the chance to get featured.

And as Apple invests in featuring you, you should also invest in your app by creating PR campaigns, trailers, screen shots, and interviews. Your game should have good reviews at the outset, and you should monitor what is being said about your game in places like Neogaf or the Touch Arcade forums. And if you’re going to create ads for your games, make sure they can see them in Cupertino, Calif., where Apple’s headquarters is.

But above all else, Ehrenberg repeated that you cannot forget you have to make a great game.

“Make it special, make it innovative, and make it best in class,” Ehrenberg said.