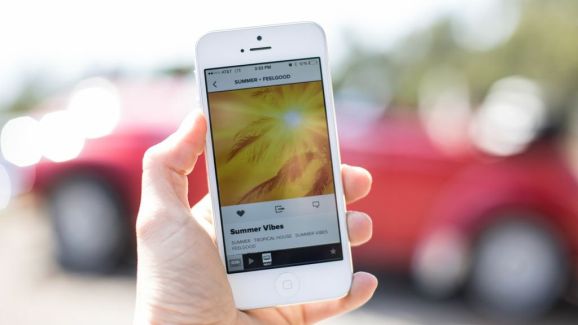 8tracks allows people to create or listen to themed music playlists that are at least 30 minutes in length and include music from personal libraries as well as SoundCloud. The service is a hit with the 18-to-24 age demographic (a.k.a. college-age listeners that are voracious when it comes to music consumption), which is extremely valuable to advertisers.

Founder David Porter told VentureBeat the new iOS app update — the first major overhaul since 2012 — puts a premium on helping people find music mixes they’re likely to enjoy, which can sometimes be difficult for new and casual 8tracks users. Playlist and content discovery is something 8tracks hasn’t devoted a lot of attention to in the past, as Porter admitted in a previous interview, but that changes with today’s app update.

A lot of the content discovery improvement is accomplished through the app’s revamped design, both in terms of the user interface and some cosmetic changes.

Above: The revamped Explore feature for 8tracks’ iOS app.

The update brings a new way for people to navigate through the service, ditching the bottom row menu in favor of a sidebar that stays hidden until accessed. The way 8tracks handles discovery has also been overhauled, as you now have lots of options to seek out new music content. The service still includes an Explore feature that pulls up a collection of tags. And as I previously mentioned, there are some subtle cosmetic tweaks that should help users find what they’re looking for quicker. (For example, genre tags are now a different color from theme-based tags.)

Another really useful addition in the update is its Timeline feature, which is enabled when you start playing a mix. Swiping right reveals your listening history while swiping left pulls up a list of upcoming mixes. Just below the Timeline is a row of shortcuts that consist of tag combinations and your most frequently listened-to music mixes.

8tracks has done a good job of showing that its music service has long-term traction while maintaining profitability. Now it’s trying to cash in on that hard work by making sure potential advertisers understand the service’s value, which should be easier after today’s update.

The new design was also set up with monetization in mind. The company has been forging direct ad deals and building its sales team over the last year, and it is now ready to deliver.

The updated 8tracks iOS app also sees the debut of three new native advertising units. Advertisers can now buy sponsored playlists, which can be created by/for a particular brand or plucked from the thousands of top playlists generated by 8tracks users. The two other units include in-feed ads that appear when scrolling vertically through a playlist and a display ad unit that pops up when scrolling horizontally between a collection of many playlists.

Founded in 2008, the San Francisco, Calif.-based startup has raised a total of $1.5 million in funding to date. Porter told me 8tracks is planning to release an updated version of its Android app in the near future.

For a closer look at 8tracks’ revamped iOS app, check out the gallery of screenshots embedded below.