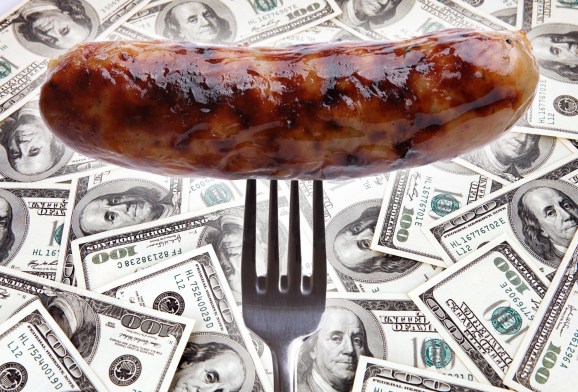 People say that Washington, D.C. is where the sausage gets made because incentives, interests, and compromises worm their way into bills as they go through Congress.

A bill that is submitted to the U.S. House by one or more representatives must gain the support of a committee before it moves to the full house for a vote. On average, less than 1% of all bills that are submitted for consideration actually reach the President’s desk for signature. Amazingly, equity and debt crowdfunding was one of those bills. Even though what was signed into law was not perfect, it is a workable solution and Congress should be congratulated for seeing the opportunity in crowdfunding for American entrepreneurship.

In the proposed rules, the SEC ran a cost benefit analysis of the crowdfunding legislation. (You can see our take on it in this VentureBeat piece: It might cost you $39K to crowdfund $100K under the SEC’s new rules). These costs were the impetus for a legislative fix on Capitol Hill — and that bill has entered into committee.

Representative Patrick McHenry (R-NC) this week introduced the Equity Crowdfunding Improvement Act of 2014. In the bill, McHenry aims to strike the proper balance between taking out too much of what some might consider smart investor protections, like online intermediaries, while reducing some of the bureaucracy, like annual audits and compliance reports.

He aims to raise the amount one can seek up to $3 million (or $5 million if you provide audited financial statement) and caps investments at the greater of $5,000 or 10% of an investor’s annual income or net worth. (So if you made $65,000 last year, the most you’d be able to invest is $6,500.) It keeps all the important transparency and reporting things like disclosures, investor education, escrow agents, and intermediaries. It also preempts the costly state-by-state registration requirements that would be required under a traditional filing and essentially kill crowdfunding.

Probably of greatest interest is the addition of crowdfund investment companies. This would allow funds to develop with the sole purpose of raising money from the crowd to make investments into startups and small businesses, but leave the diligence to the experts — a smart addition if you ask us.

So how will this effort fare? Given that unregulated, reward-based crowdfunding site Kickstarter has funded $1 billion in projects without any major scars, and the peer-to-peer lending platform Prosper originated $1 billion of unsecured personal loans last year quite efficiently, we would hope that Congress would see the potential for the American economy sitting on the sidelines with peer-to-business crowdfunding.

But if the bill exits committee and passes the House, it could be met with resistance in the Senate, where the deep-pocketed lobby groups — the people that control the financial markets and don’t want to lose that money and power — influence the votes of the Senators.

We’ve seen this sausage made before

Representative Patrick McHenry (R-NC) introduced the Entrepreneur Access to Capital Act back in September 2011. That bill passed the House two months later with 97% approval. It allowed entrepreneurs to raise up to $1 million per year, provided that investors didn’t risk more than $10,000 or 10% of their income (whichever was lower). It also required background checks in issuers, warnings on the speculative nature of these assets to investors, mandatory investor education, third-party escrow agents to prevent fly-by-night operations, and mandated a one-year holding period on the securities to prevent the pumping and dumping schemes popularized in the movie Boiler Room.

Essentially, this bill re-regulated the market to enable securities-based crowdfunding. For the first time, it would allow individual, unaccredited investors in the U.S. to buy and sell shares in private companies online. And it would do so by addressing the prior failures in updating the securities laws and using technology to manage the process.

It was so popular it even received a Statement of Administrative support from the President, the highest acknowledgement you can get from the White House that the President supports a bill. Keep in mind this was a Democratic President backing a Republican sponsored bill.

Then it went to the Senate, where three versions of the same bill appeared with grossly different terms. Senators introduced broker dealers into the equation, along with overly burdensome audits, compliance and reporting requirements, and daunting liabilities to the crowdfunding websites that would host the transactions. And through the sausage making process, crowdfunding became part of the JOBS Act, passed the Senate on a vote of 73-26, and the President signed it into law.

Two years later, we have yet to see crowdfunding — otherwise known as Title III in the JOBS Act — go into effect. We have a whopping 585-pages of proposed rules, but the SEC hasn’t finished their job and flipped the switch. This has been met with much frustration on Capital Hill, on Main Street, and in the crowdfunding industry.

That’s why McHenry is speaking out. While the donation-, perks-, and P2P-based crowdfunding industry explodes, entrepreneurs and small businesses that want equity- and debt-based crowdfunding continue to wait and wait. Inaction on this issue is damaging our global competitiveness. Countries around the world are moving forward to modernize their securities regulations, using crowdfunding to create jobs, innovation, and entrepreneurs.

And Americans continue to just sit and watch the sausage-making.